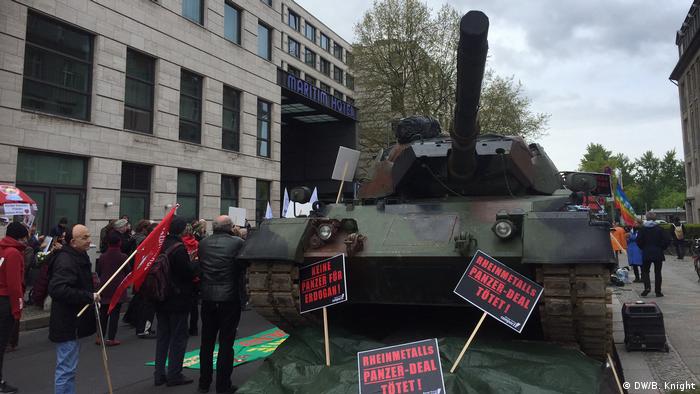 It had been a while since a tank appeared outside the German Defense Ministry, but a Leopard 1 rolled up to the military's political headquarters in Berlin on Tuesday morning, along with about a hundred protesters - some wearing masks and others covered from head to foot in cartoons and slogans - from a panoply of peace organizations and political parties.

Bothering ministry officials turned out to be a bonus, because the flag-waving campaigners from Campact, Aktion Aufschrei (Action Outcry), the Greens and the Left party were actually there to spoil the party for the stockholders of Rheinmetall - one of Germany's biggest military firms - who had gathered on the other side of the road for their annual general meeting in the Maritim Hotel.

The location of the AGM was also convenient for former Defense Minister Franz Josef Jung, who was confirmed to Rheinmetall's executive board on Tuesday. The former Christian Democrat politician was seen rushing past the demo into his old ministry before dodging back out again and into the hotel - followed by a chorus of boos. 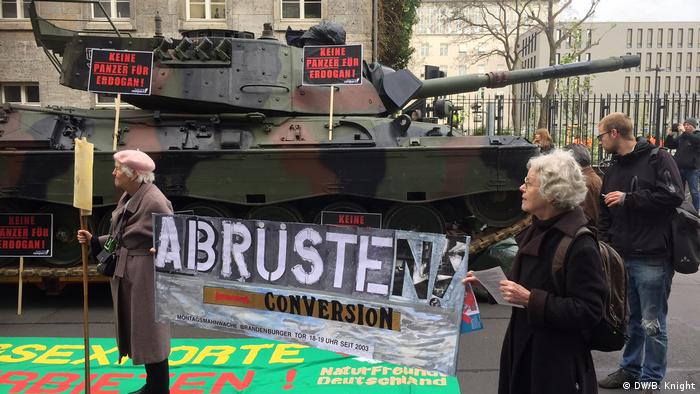 The decommissioned Leopard 1, rented from a specialist service in Brandenburg, was one of those that Rheinmetall had helped manufacture when it was the German military's standard tank during its production between 1964 and 1984. Several hundred Bundeswehr Leopards were sold on to Turkey in the early 1980s, and now Rheinmetall is looking to strengthen its connection with the long-standing client - despite the increasing authoritarian bent of President Recep Tayyip Erdogan.

Perhaps to spare the German government the embarrassment of approving more sales that could violate national guidelines against exporting arms to countries that commit human rights abuses, Rheinmetall has recently come up with a new plan to get its military technology to Turkey: by partnering with local companies to build factories there.

Journalists from "Stern" magazine, the investigative group Correctiv and the Turkish exile outlet Ozguruz revealed in March that Rheinmetall was helping to build a tank factory in Turkey by contributing 40 percent of a new joint venture named RBSS - along with the Turkish automaker BMC and the Malaysian company Holding Etika Strategi.

Rheinmetall initially defended the plan as legitimate on the grounds that Turkey is a "fully integrated NATO partner." But the political climate has grown worse: In March it emerged that Germany's government had blocked the sales of some small arms and ammunition to Turkey, citing concerns over conflicts with Kurdish groups and human rights abuses. And, in August, several media outlets reported that Turkey's government had used tanks to attack Kurdish militias in northern Syria. 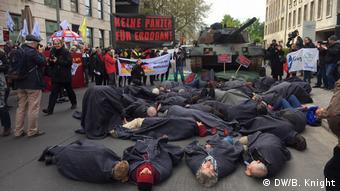 Some protesters re-enacted the casualties caused by German weapons abroad

Rheinmetall's partnership with the country has some history. Back in May 2015, the company signed a memorandum of understanding with the Turkish firm MKEK to develop new weapons systems and ammunition.

But, speaking to "Die Zeit" in April, a company spokesman appeared to acknowledge the friction between Berlin and Ankara. "In the current political constellation, it is completely open whether this cooperation will happen, and if so when," he told the newspaper.

Despite this uncertainty, shareholders sitting in the Maritim Hotel on Tuesday had every reason to celebrate: Rheinmetall has just reported a 61 percent rise in first quarter earnings - prompting a lucrative rise in the share price.

Outside at the demo, Barbara Happe of co-organizers Urgewald, was preparing her notes before speaking to the shareholders. (Arms protesters often buy a single share in German manufacturers to give them the right to address their yearly assemblies.) 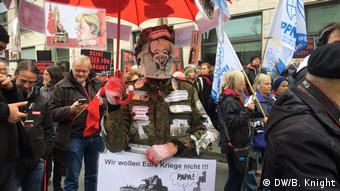 Some protesters dressed up more than others

"The dissatisfaction among human rights groups and the population at large is growing because people think that, under the current political circumstances, Turkey should not be armed even more, and shouldn't be supported in building up its own defense industry," she told DW. "Turkey is transforming more and more into an autocracy - especially after the referendum."

"The problem is that Rheinmetall is following a very skillful strategy," she added. "These aren't exports, but joint ventures, which means they want to develop new ammunition and new kinds of tanks with local partners, so that they don't need approval from the German government."

Still, the government could apply pressure in other ways, Happe suggested, for instance by excluding Rheinmetall from German military contracts.

Lühr Henken, spokesman for the Network of the German Peace Movement, had a simpler idea: "The government could make a political statement and say that Rheinmetall shouldn't take part in this joint venture, just as it has said (in response to another Turkish referendum) that you can't campaign in favor of the death penalty in Germany."

Germany's ammunition exports skyrocketed in the first half of 2016, a leaked report has revealed. Turkey, currently suppressing its political opposition, has moved up the list of the country's best customers. (25.10.2016)

The German government has refused approval for military exports to NATO partner country Turkey on a growing number of occasions. Ministers are concerned the weapons could be used to oppress the local population. (22.03.2017)