After Georgia's ruling party backtracked on electoral reforms, demonstrators took to the streets. Protesters say they are fighting not just for changes to the electoral system but for democracy itself.

Georgia is facing "the end of the Dream," according to placards outside parliament. Tens of thousands of protesters gathered this week in the capital, Tbilisi, to call for constitutional changes opposed by the governing Georgian Dream Party.

Demonstrators continue to take to the streets with no sign of stopping. Several hundred have been protesting outside various government buildings and some have even set up tents at the foot of the steps leading to the parliament building's arches.

″We are here protesting because they lied to us, and they made a false promise," one young woman told DW at a rally. Demonstrators said they will protest until their demands for snap elections and a change to a proportional electoral system are met. Three people were detained during a protest outside the Georgian Dream party′s headquarters on Thursday and 10 were jailed for a rally that took place earlier this week, which police dispersed with water cannons. 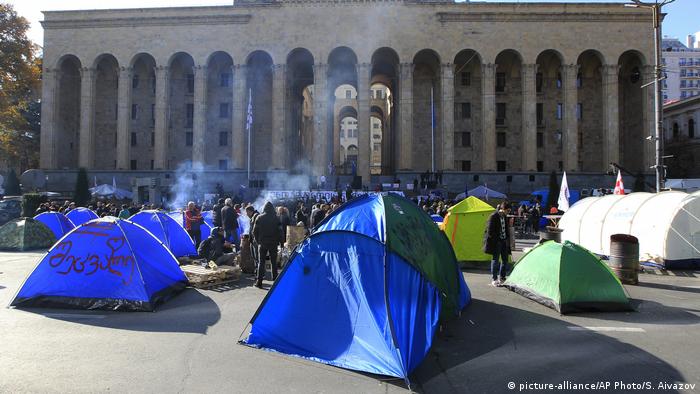 Following June protests that left 240 people injured, Georgian Dream had promised to make changes to the country's electoral system, which critics say favors the ruling party, and move toward a system of proportional representation. Such a change would provide more space for smaller parties to be part of the decision-making process, allowing parliament to represent a wider segment of Georgian society.

Last week a vote on a constitutional amendment to change the electoral system did not pass in parliament, where the Georgian Dream party holds a majority. And now protesters say they are angry the government thinks it can get away with going back on its promise.

″Georgian Dream has been lying to people and deceiving them for many years," one man said. "This isn′t the first time. But now they have crossed a line.″

A fight for democracy itself

More than an abstract debate over electoral reforms, protesters said they are fighting for democracy.

According to recent polls by the IRI, a US democracy group, the majority of Georgians have heard about the proposed electoral reform. Of those who know about it, the survey shows 78 percent support the change. 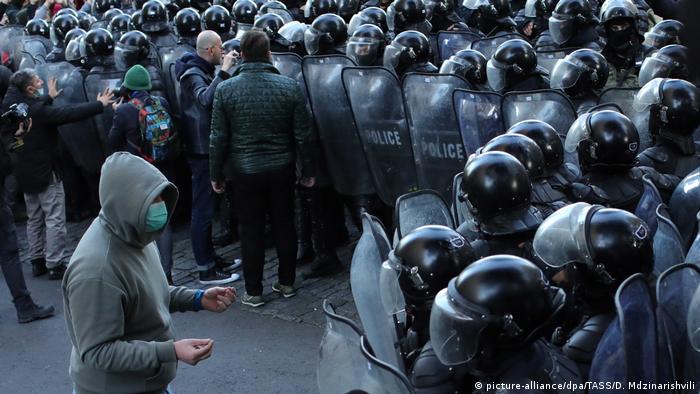 Demonstrators say they are fighting for democracy in Georgia

But among those in power, there is less willingness to change the system.

″No political party [in power] ever really wanted to change this system because it always favors the incumbent," said Mikheil Benidze, executive director of the International Society for Fair Elections and Democracy, an independent election monitoring NGO.

No changes were made when the current opposition was in power and at that time several politicians in the Georgian Dream party pushed for electoral reform as well, he added.

The failed amendment vote sparked a deadlock in parliament with opposition politicians refusing to attend sessions this week, while 12 Georgian Dream members left the ruling party.

Tamar Chugoshvili, who served as first vice speaker in the parliament and foreign secretary of the party, was among them. She said she and her colleagues wanted to send a message about breaking promises made to the public as well as to Georgia's international partners.

″For months my role was to convince everyone that these amendments would pass," she told DW. "But because we have not delivered on this commitment, which was very clearly made from our side, I decided that I have to take responsibility for this failure.″

The US and the EU embassies in Georgia issued a joint statement in solidarity with the anti-government protesters, saying they ″recognize the deep disappointment of a wide segment of Georgian society at the failure of parliament to pass the constitutional amendments.″

Chugoshvili called Western support of crucial importance for Georgia, a country pushing to join Western institutions like NATO. ″Basically our future depends on how much the West is willing to support Georgia," she said. 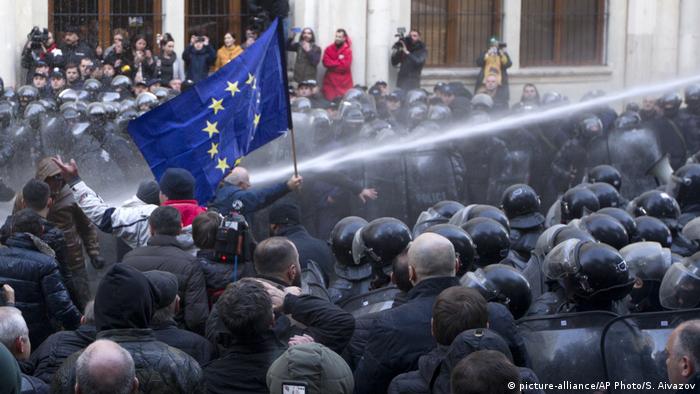 Many in Georgia want closer ties to the European Union

A country where parties work together

Giorgi Volski, the leader of the Georgian Dream majority in parliament, agreed that Western support is important, especially for a country that fought a war with Russia in 2008. But he argued that Georgian Dream brought stability and social progress for people within Georgia and accused protesters of destabilizing the country.

″The opposition is trying to create some unrest around the parliament around some government buildings,″ Volski said. ″To me, all of them are citizens of Georgia. But when we are just talking about [a few] thousand people and half of them are just activists from certain political parties, we can′t talk about a political crisis."

For Mikheil Benidze of the International Society for Fair Elections and Democracy, the protests show change is what Georgians want.

″The protests here are clearly fueled by protesters′ pro-Western and pro-European values," he said. "What the Georgian public wants to have here is a country in which there is a fair representation, where it′s possible for parties to work together, and where it is also possible to have adequate checks and balances — rather than having single-party dominance."

Giorgi Gakharia, who the opposition previously labeled "Moscow's man," has been appointed prime minister. He is blamed for orchestrating a violent crackdown against anti-government protesters, many of them youths. (08.09.2019)