Georgia is in turmoil. Hundreds of people were injured in protests earlier this week in Tbilisi, and the parliamentary speaker was forced to resign. A veritable political crisis might be looming, says Christian Trippe. 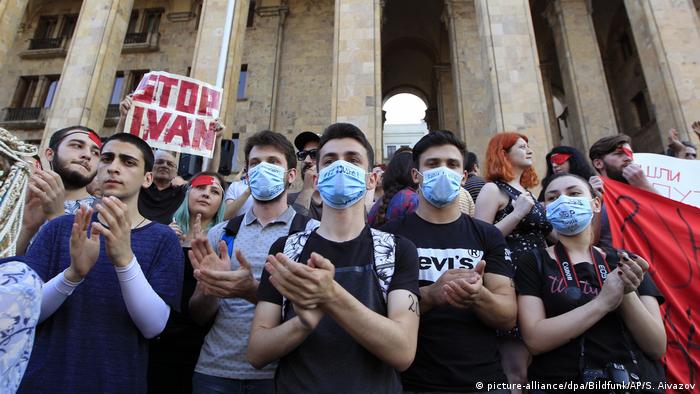 In recent years, Georgia's parliament in the capital, Tbilisi, has found itself at the center of numerous momentous political events. In 2003, weeks of protests culminated here in the ouster of President Eduard Shevardnadze, in what became known as the Rose Revolution.

More than a decade earlier, in 1991, the storming of parliament precipitated the Georgian Civil War, which led to the regions of South Ossetia and Abkhazia splitting off from Georgia. Today, both are officially republics, yet depend heavily on Russian economic and military support to survive.

A giant memorial stone in front of parliament commemorates the 21 Georgian nationals who died on April 9, 1989, when Soviet troops brutally suppressed a Georgian pro-independence rally.

As such, Georgia's parliament is steeped in history and replete with political symbolism.

So the decision to allow Russian lawmaker Sergei Gavrilov to speak to the assembly of legislators from Orthodox Christian countries in this very parliament on Thursday could only backfire. Gavrilov, after all, is a member of the communist party and an apologist for Russian geopolitical expansionism.

Gavrilov, who was born in Russia's Central Federal District, considers Georgia his "homeland." This, too, has been seen by many Georgians as a provocation. And when he took the seat of Georgia's parliamentary speaker, thousands of Georgians took to the streets to vent their anger.

Georgians are a passionate people when it comes to politics, even though the country's major parties hardly differ in their economic and social positions. What does set them apart, however, is their stance on Russia. Some suggest talking to their vast northern neighbor, even though Russia occupies South Ossetia and Abkhazia, and thus a fifth of Georgia's total territory. Yet others say refusing to communicate is the best solution. And some advocate proactively seeking closer ties with the European Union and NATO.

The powerful elite surrounding Russian President Vladimir Putin has an imperial mindset. To them, gaining cultural influence in former Soviet republics and satellite states is not an end in itself. Instead, this elite, which thinks in broad geopolitical terms, is eager to transform this cultural clout into political gains. This imperial mindset has pro-Western Georgians who distrust their current government worried.

Georgia is a tiny, pro-Western island in the Caucasus. To the north it's boxed in by Russia; Armenia, which is dependent on Russia, lies to its south; and an increasingly pro-Russian and anti-American Turkey is to the southwest. The domestic instability in Georgia reflects the wider geopolitical power struggle in the region, with the protests in Tbilisi caught up in the slipstream of the escalating tensions between the US and Iran in the Gulf.

A visit by Russian parliamentarians to Georgia has sparked mass protests, injuring hundreds. Relations between the countries have been tense since before the 2008 war — and now old wounds are being reopened. (21.06.2019)

Georgian opposition leaders said they would hold mass protests until parliament was dissolved. Moscow condemned the rallies as "russophobic provocation" as a Russian delegation paid a visit. (21.06.2019)

Israeli Pegasus spyware used to spy on US officials: reports 6h ago

Opinion: Germany has come to grips with COVID at last 10h ago