Georgian opposition leaders said they would hold mass protests until parliament was dissolved. Moscow condemned the rallies as "russophobic provocation" as a Russian delegation paid a visit. 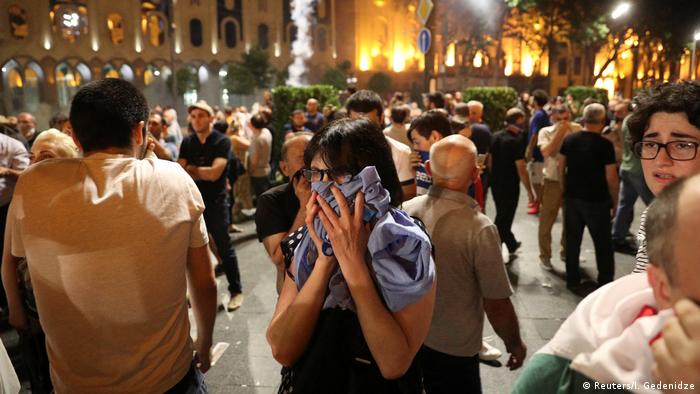 Police fired volleys of tear gas and rounds of rubber bullets as a crowd gathered outside Georgia's parliament on Thursday evening to demand the resignation of the legislature's speaker.

Thousands had gathered to voice outrage over the visit of a Russian delegation, more than a decade after the two nations fought a war in which Georgia effectively lost two large chunks of its territory.

On Friday, the Kremlin condemned the protests: "Everything that happened in Georgia yesterday is nothing but a russophobic provocation," spokesman Dmitry Peskov said. He called for "harsh condemnation" of the people who took part.

But Georgian opposition leaders said they would hold mass protests until parliament was dissolved. "The Georgian people and opposition parties demand snap parliamentary polls as well as the resignation of the speaker and the interior minister," Grigol Vashadze, the leader of the United Opposition alliance said. "Peaceful mass protest will continue until these demands are met," he said, announcing that another rally would start at 7 p.m. (UTC 1500) on Friday.

Some 10,000 demonstrators were reported to have gathered on Thursday when police fired tear gas rounds, causing most to disperse.

Other protesters pushed against police cordons and tried to enter the parliament building. The demonstrators were reported to have thrown bottles and tried to snatch riot shields and helmets from officers, with police firing rubber bullets in response. 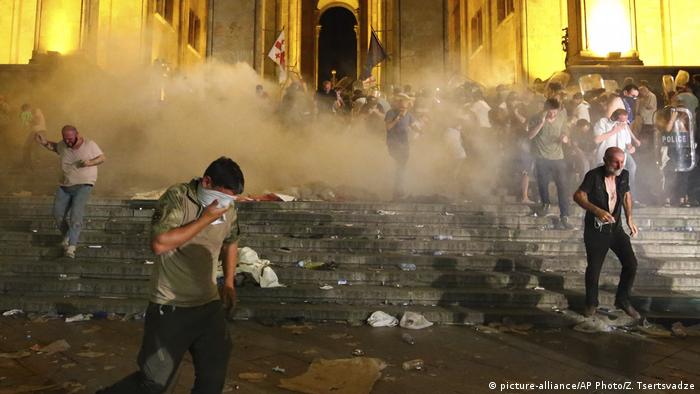 Protesters outside parliament in Tbilisi amid clouds of tear gas

Georgia's health ministry reported that 38 officers and 14 civilians had been injured.

The protest was sparked by an invitation to Russian lawmaker Sergei Gavrilov. He addressed an inter-parliamentary forum of lawmakers in his native Russian from the Georgian parliamentary speaker's seat.

'Russia is an occupier'

Russian political influence is a sensitive issue in the former Soviet republic — particularly after a brief war in 2008 that saw it lose control of the regions of South Ossetia and Abkhazia, which both have sizeable Russian populations.

Protesters at the rally held Georgian and EU flags and placards that read "Russia is an occupier," and demanded the resignation of parliamentary speaker Irakli Kobakhidze.

The Interparliamentary Assembly on Orthodoxy meeting, chaired by Gavrilov, was cut short as a result of the protests outside and pressure from Georgian opposition lawmakers within parliament. Georgian oligarch Bidzina Ivanishvili, a former prime minister who founded the ruling "Georgian Dream" party, said he had told Kobakhidze to suspend the session.

Opposition party members called for the country's interior minister and the head of state security to step down.

"Georgian Dream has brought the Russian occupiers in and let them sit in the speaker's chair," said Elene Khoshtaria, an opposition member of parliament. "That was a slap in the face to recent Georgian history."

"It is unacceptable that a representative of the occupier country chairs a forum in the Georgian parliament," he said.

Moscow has recognized both South Ossetia and Abkhazia as independent states and stationed permanent military bases in each, leading to condemnation from the West. Last year, Syria recognized the two regions as sovereign nations in a diplomatic nod to Moscow. Other nations that recognize both include Nicaragua and Venezuela.

Just as Ukraine is set for a new leader, Russia has offered passports to millions of Ukrainians. Experts say Moscow wants to cement power over occupied areas and stop population decline — but the move is a powder keg. (03.05.2019)