When it comes to gender equality, Sweden and Denmark topped the list in a recent EU report while Greece and Hungary came in at the bottom. Germany finished in the middle of the field.

Compared to men, women in Germany tend to study subjects that lead to lower paying jobs

Gender equality in Germany is below the European average, according to a new European Union (EU) study released on Wednesday in Brussels.

The European Institute for Gender Equality (EIGE) placed Germany 12th in a ranking of all EU 28 member states in its new Gender Equality Index, which scores countries from 0 to 100 across domains including work, health, and political representation.

Germany's score suffered particularly in the area of education where it came in 25th in the EU-wide ranking. That was a notable drop from its 16th place ranking in the last version of the index. 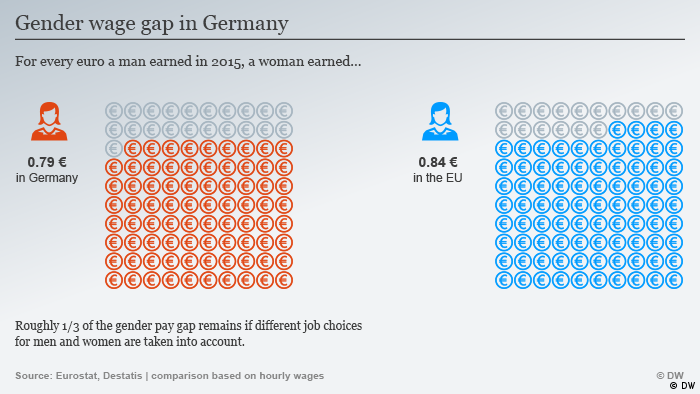 The index shows that the EU has gradually improved since the first edition of the index scored EU countries for gender equality in 2005. Whereas the EU average score was 62 in 2005, it increased to 66.2 in 2015.

EIGE put the overall improvement down to progress in women's opportunities in the areas of work, finance, influence, and health. In terms of influence, women had markedly greater representation in the top levels of business and politics compared to a decade prior.

Greece, followed by Hungary, took in the last spots of the newest EIGE ranking, while Sweden and Denmark were rated the most and second-most gender-equal countries in the EU.

Vera Jourova, the EU commissioner responsible for gender equality, cautioned against celebrating any slight improvements. She stressed that almost half of EU member states scored worse in at least one area compared to previous years.

"We cannot think of our societies as modern when we let so many people down," she said. "The new results of the Gender Equality Index show that across all areas of life inequality prevails. This means Europe has a duty to act."

Fact check: US helicopter flight no proof of sabotage of Nord Stream pipeline 30.09.2022

Sabotage is believed to be the likely cause of the leaks in the Nord Stream 1 and 2 pipelines. Pro-Russian voices claim a US helicopter may have carried out the attack. DW takes a look at those claims.