The French leader is setting the tone ahead of a NATO summit next week. At issue are unresolved questions over peace in Europe, relations with Russia, Turkey and greater NATO involvement in the Sahel, Macron said. 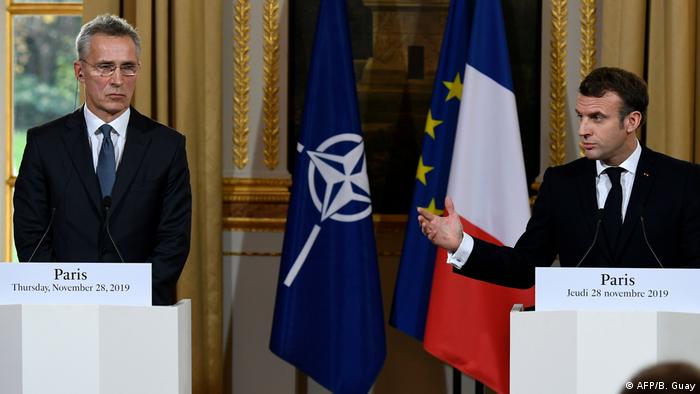 French President Emmanuel Macron on Thursday stood by his controversial remarks that NATO is "brain dead," saying that it was a useful wake-up call to alliance members.

Macron's sharp criticism in early November has stirred debate in Washington and European capitals ahead of a December 4 NATO leaders' summit in London.

Speaking alongside NATO Secretary-General Jens Stoltenberg in Paris, Macron pressed for more unity and coordination within the alliance, and the need for Europe to take on more security responsibility.

"The last two summits were devoted solely to working out how we could lighten ... the financial cost to the United States," Macron said, describing a "glaring disconnect" between this debate and the challenges facing the alliance.

The French leader has been critical of the United States after it abruptly pulled troops out of northeastern Syria, allowing NATO member Turkey to launch an incursion against the Kurdish YPG militia fighting against the "Islamic State" group. The US and Turkey did not coordinate their moves with NATO members.

Macron said that Turkey cannot expect solidarity from NATO allies while also launching an offensive in Syria as a "fait accompli." The comments come as Turkey is reportedly resisting an alliance defense plan for the Baltics and Poland unless NATO provides Ankara more political and military support in its fight against the Kurdish YPG militia in northern Syria.

Macron calls for dialogue with Russia

Touching on relations with Russia, Macron urged the alliance to engage with President Vladimir Putin on a host of issues. He said this includes Europe being involved in a new pact limiting mid-range nuclear missiles held by the US and Russia, after the landmark Intermediate-Range Nuclear Forces treaty collapsed in August.

"We want a lucid, robust and demanding dialogue with Russia, with neither naivety nor complacency," Macron said.

"An accord that would replace the INF... requires the involvement of Europeans," he said. "It's a question of the security of Europe."

Intervention in the Sahel

During the press conference, Macron also called on NATO to do more to help French forces fighting extremism in the Sahel.

"I want a discussion between allies on a concrete commitment to the fight against terrorism in the Sahel and the Middle East," the French president said.

He added that France would be doing a review of its intervention in Africa this week after 13 soldiers were killed.

Macron said: "Yesterday I held a first meeting, and I have asked the government and our armies to undertake a deep review in the coming weeks to examine the modalities of our intervention," he said. "In this context, and in light of the decisions that France will take, a bigger engagement by its allies is obviously something that would be quite positive."

German Chancellor Angela Merkel, a day earlier, called for the arming of African soldiers in the region.

The German leader says NATO is even more essential to Germany and Europe now than during the Cold War. (27.11.2019)

Germany to match US contribution to NATO budget: reports