The chancellor has called on politicians to rethink restrictive arms export policies, arguing they are not in Germany's best interest. She made the case for more engagement in Africa's Sahel region. 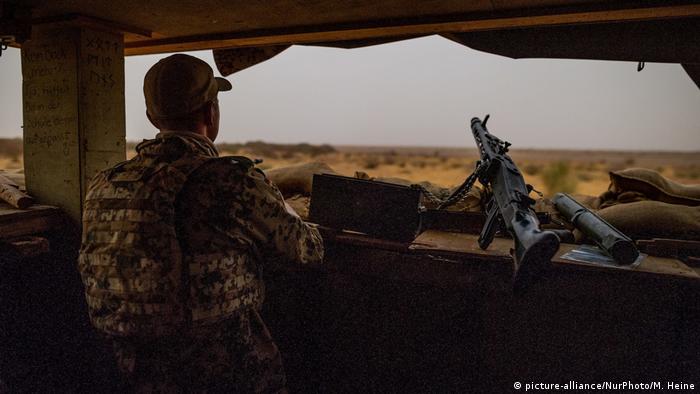 German Chancellor Angela Merkel stressed the urgency of preventing Libya from becoming a proxy war like Syria and underlined the threat of destabilization in Africa's Sahel region by terrorists, in comments to Germany's parliament, the Bundestag, on Wednesday.

Merkel called that second issue "one of the most serious problems we face at the moment," linking it directly to Germany's own security.

In touching on the issue she outlined her vision for an expanded German presence in the broader Sahel region beyond Mali, where Germany has deployed troops since 2013.

During her address, Merkel urged parliamentarians to reconsider their restrictive arms export stance, arguing that Germany cannot continue to train and encourage African forces fighting terrorists but not arm them.

To underscore the earnestness of the problem, she spoke of a recent meeting between high-level African Union representatives and Russian President Vladimir Putin in Sochi, Russia. She pointed out that the meeting was accompanied by a large arms display at which Africans were offered discounts on Russian weaponry.

"I ask myself, is it in our interest if Africa is armed by Russia, or perhaps China or Saudi Arabia? I don't think we can encourage stability and peace in Africa, yet refuse to supply any arms," she said, adding, "We cannot train people who have to fight terrorists, only to say it's up to them to see where they get their weapons."

Merkel also made mention of the fact that Germany and France had recently agreed to start a Sahel security initiative at the G7 summit in Biarritz this past August. The initiative will operate parallel to Germany's support for G5S troops in the Sahel as well as efforts to establish a "robust UN mandate" in the region.

Merkel's address comes as EU and NATO ally France mourns 13 soldiers killed in a helicopter crash on Monday while battling terrorists in Mali. It was the worst loss of life by French troops in nearly four decades.

MONUSCO is the biggest and most expensive UN peacekeeping mission in the Democratic Republic of Congo. This is only one of the many other African countries where the "blue helmets" are intervening. (15.04.2017)