Germany's top diplomat, Frank-Walter Steinmeier, called for talks to start "as soon as possible," after he met with representatives of the EU's founding nations. His colleagues also pressed London to seek talks soon. 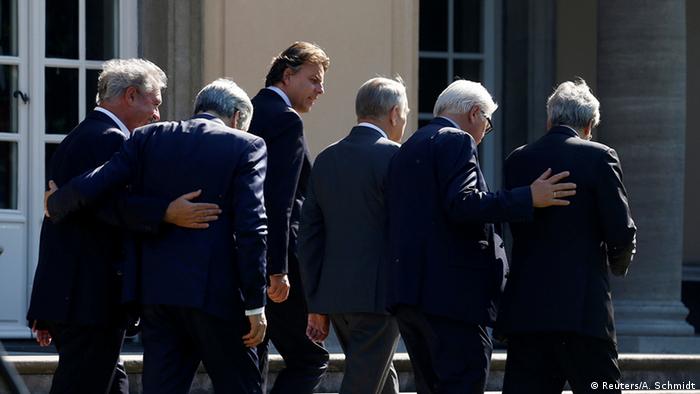 Representatives of the EU's original six member states presented a united front on Brexit after meeting in Berlin on Saturday.

"The people have spoken, and we need to implement this decision," Luxembourg Foreign Minister Jean Asselborn said about the British vote to leave the EU. The UK should not "play a game of cat and mouse" by delaying divorce talks, he added.

The hastily arranged summit gathered the top diplomats of France, Italy, the Netherlands, Belgium and Luxembourg, with Germany's Steinmeier acting as host.

Steinmeier urged London to start the separation process "as soon as possible to avoid a prolonged deadlock," which could bring financial and political insecurity.

"We understand and respect the result and understand that Britain is now concentrating on Britain," Steinmeier said.

"But London has a responsibility toward more than just Britain," Steinmeier added. "We must now be allowed to focus on the future of Europe."

Cameron to 'live with the consequences'

"There is no time to lose," French Foreign Minister Jean-Marc Ayrault said, referring to British Prime Minister David Cameron, who has announced that he will step down. "Of course a new prime minister must be appointed," he added. "That will probably require a few days - but this is quite urgent."

Ayrault said Cameron had set the referendum in motion and "now needs to live with the consequences."

"This will not be business as usual," Koenders said.

Cameron has said the formal separation process would probably not start before his resignation, which he scheduled for October. The Lisbon Treaty sets out a two-year timeframe for the pullout.

Ahead of Saturday's meeting, Germany and France were reportedly planning to present joint reform proposals at the summit, including a strategic draft on a "flexible union." The new system would give more leeway to individual members to decide on their degree of integration.

On his way to the conference, Foreign Minister Steinmeier told reporters that the Brexit vote should be seen as a wake-up call.

"It is apparent that Europe needs to deliver solutions the people are asking for," Steinmeier said. He said major issues included refugees and immigration, as well as youth unemployment and security.

The EU has its origins in the European Economic Community, which was established in 1957 by West Germany, France, Italy, and the Benelux countries. The UK joined in 1973.

The Leave campaign claimed a shock victory in the UK's EU referendum, but as Samira Shackle reports from London, results show a deeply divided public. (24.06.2016)