Firestarters: The trees that burn and those that don′t | Science | In-depth reporting on science and technology | DW | 25.09.2020 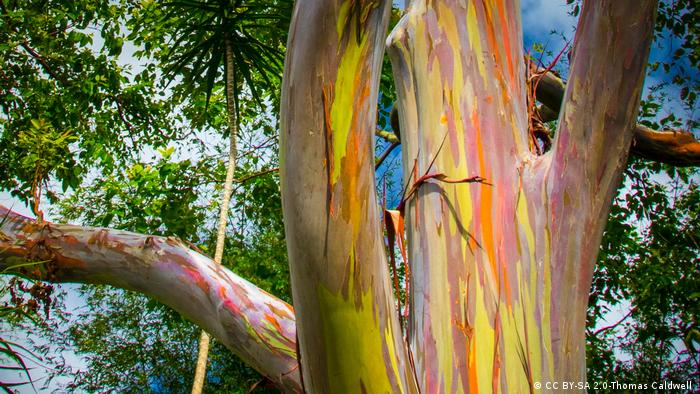 From Siberia to Sumatra, from the Greek and Portuguese islands to the Amazon — in fact, anywhere, where there are trees, shrubs, or grassland, it's all prone to burn.

Some of it even needs to burn to reseed the land and rejuvenate.

Some trees, like eucalypts, have adapted to fire over millions of years. Eucalypts burn fast but they know how to survive as well.

Others, meanwhile, "wouldn't burn if you put a blowtorch on them," says Bob Scholes, a professor of systems ecology at the University of Witwatersrand in South Africa. 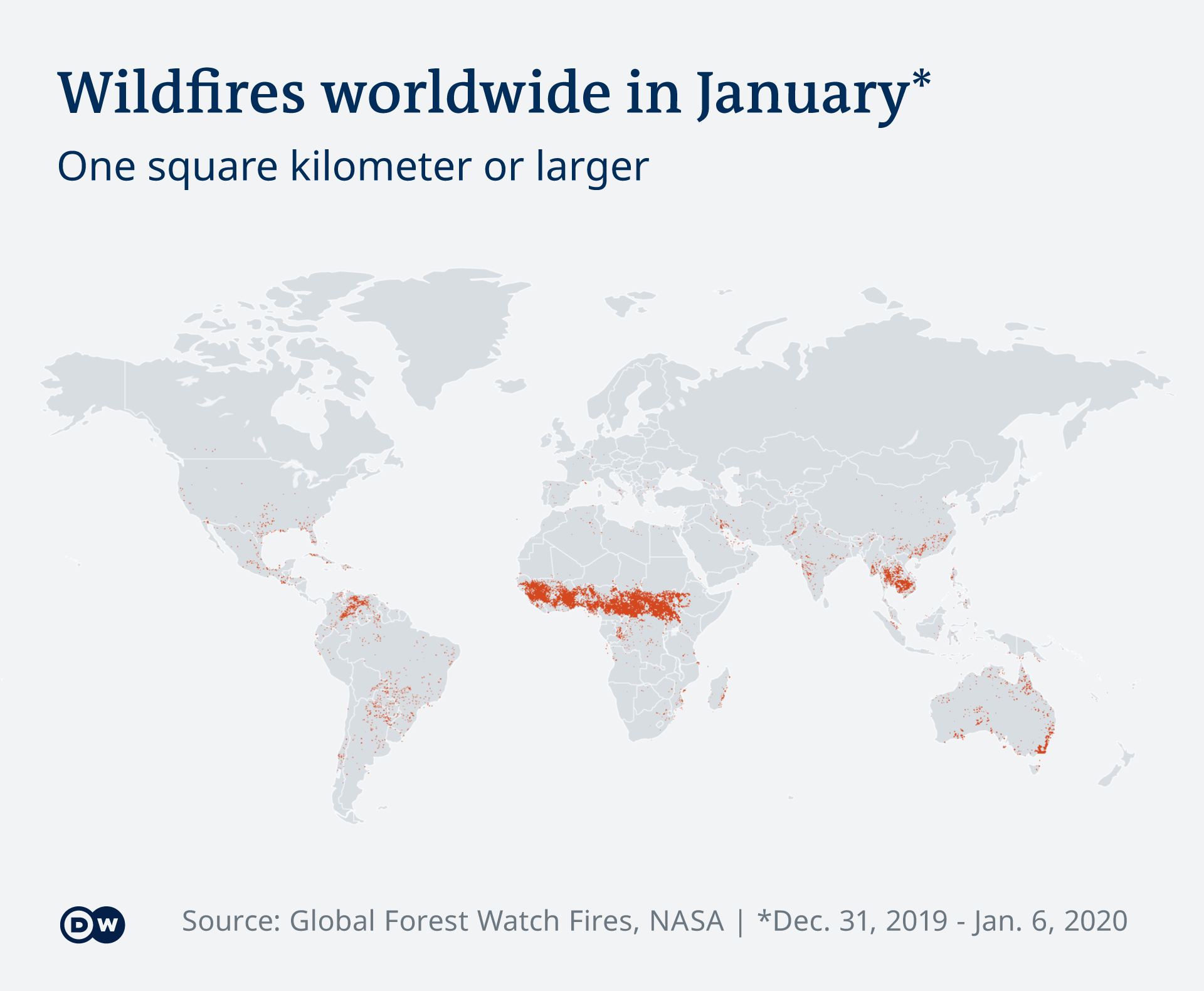 These days we tend to think only of two major regions that burn regularly: eastern and southern Australia, and California, where massive, uncontrollable blazes burn eucalypts and pine trees, respectively, with high-intensity, sometimes for months.

But there are fires in Europe, rainforests in Indonesia, and Africa, too.

Africa is "the number one hotspot"

Some Earth observation maps will suggest that Australia and the western USA don't burn half as often as parts of Africa, such as central Africa, Angola and the Democratic Republic of Congo.

"Africa is known as the 'fiery continent,'" says Scholes. "If you measure by area-burned, rather than by emissions, Africa has the largest area-burned in the world."

But almost all of those areas are savannas, where relatively low-intensity fires only burn the grass layer, without consuming any of the tree layers above. 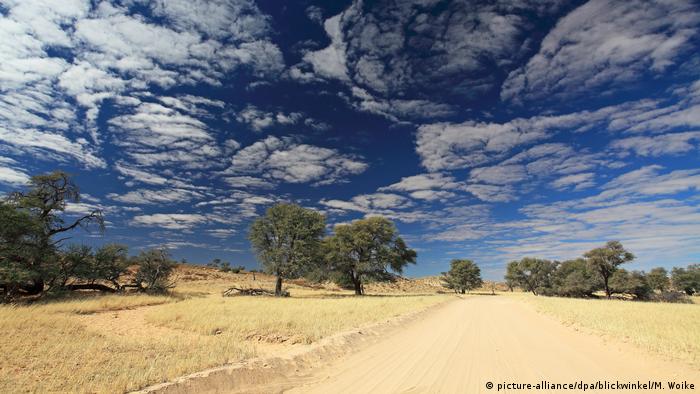 The savannas of central Africa burn frequently. The fires are usually not as severe as those in Australia or California

"There are specific ecosystems in Africa which have fire behaviors like those in Australia and California, but they are not extensive," says Scholes.

As a result, "no one really worries about [grassland fires] too much," adds Owen Price, director of the Centre for Environmental Risk Management of Bushfires at the University of Wollongong in Australia. But South Africa is "probably the number one hotspot," he says.

"The savannas are seasonally dry and some of those areas will burn every year," says Price. "We have the same in northern Australia. They burn frequently, but they are not so intense because they are only burning the grass."

Trees that burn and survive 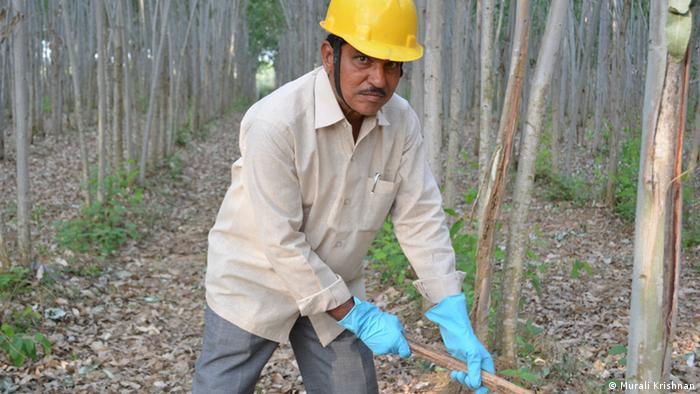 Eucalyptus are native to Australia but are often considered a "cash crop" in other countries, such as here in India

The fuel layer is on the ground, where there's dry grass, as in the savannas of Africa, but also leaves and fallen, frayed bark or branches. Occasionally, forests need a fire to burn away that dead material. It's only when the flames climb up from the fuel layer and ignite hanging leaves that the trees come closer to danger.

Eucalypts, such as those native to Australia, burn fast because their leaves are very oily. In the western United States, it tends to be pine trees that burn. Both have evolved in their respective fire environments and can survive.

"If you have a mild fire, some eucalypts will just put the leaves back on. If you have a more intense fire, they can start to put out leaves from the trunk. And if the fire is really severe, the entire top of the tree dies but it's still alive underground, so they just send up a new trunk," says Price.

Other eucalypts are killed by fire, but they tend to have prolific seeding events right after the fire. 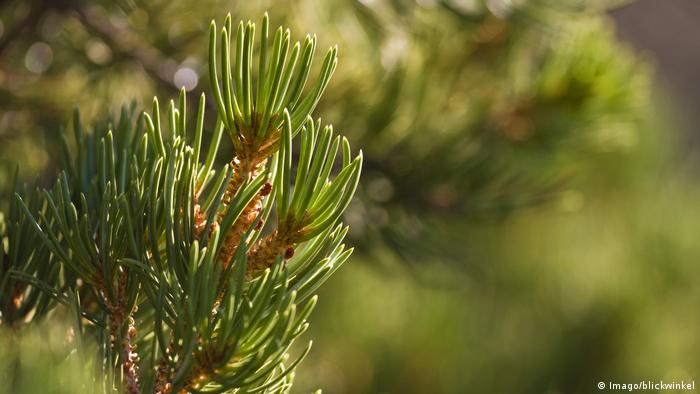 "A whole bunch of plant species hold seeds in a very hard, nut type thing, and they will sit there for years on the tree, and it's only when there's a fire that they will suddenly open and drop the seeds," says Price.

Jack pines in the US, for instance, will enclose their seeds in a hard cone and glue it shut with a resin that melts and releases the seeds when a fire comes through.

Other pines have developed a thick bark that doesn't catch fire as fast as thinner bark or burn quite as well. Thick bark will also protect the inner life of a tree.

"Some pine trees in North Carolina only throw out about 10 or 20 leaves, they just sit there on the ground, and for about six years they build up storage underground and then suddenly they will shoot up, two or three meters just in one year, and that's just to get themselves the height to escape those fires," says Price. 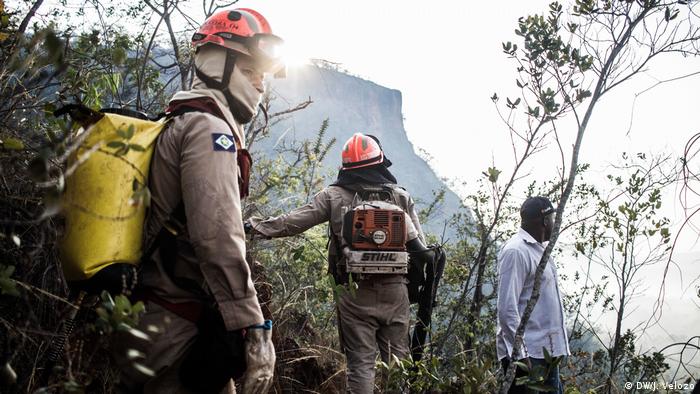 Eucalypts are native to Australia, but they have been introduced to many other countries as fast-growing trees. In some countries, they are seen as a "cash-crop" for paper, for instance.

You will find them in the Americas — they may have even originated in Patagonia. And in Portugal they are considered a "curse," says Price, because they seem to be "more flammable than the native vegetation."

Scholes says the French introduced eucalypts to Madagascar, which until the French colonial years, had been managing its grasslands just fine. Monoculture, eucalypt plantations are also found in South Africa.

But perhaps the biggest threat for high-intensity fires in South Africa is the fynbos.

The Fynbos: A "recipe for disaster"

There is a tiny area around Cape Town that is home to nearly 8,000 species of vegetation, many of which are unique to that part of the world. That's the fynbos. 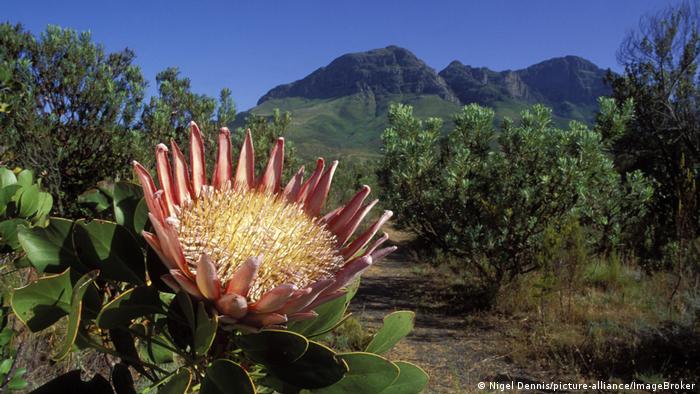 It's colorful and beautiful — and it's also home to a growing number of people who love to live in that environment.

But the fynbos burns. It burns frequently and at high-intensity "and that is a recipe for disaster," says Scholes. "Some of the problems that come up are because people have become quite disconnected from the realities of how nature works."

"We do preemptive burning in the fynbos or in the forest areas, where people are encroaching, to take out the highly-combustible fuel load," says Scholes. "And people that have grown up in urban areas just don't understand that at all. They say, 'No, no, you can't burn, you mustn't burn, we don't like it, it disturbs the animals, it messes up the washing on the lines, etcetera…,' And as a result you build up a potential fire bomb."

As in Australia, America and elsewhere, indigenous Africans, says Scholes, have always been accepting of fire. "It stimulates the production of various things they need out of those landscapes, and you can argue that those landscapes have been formed by the human-fire interaction." 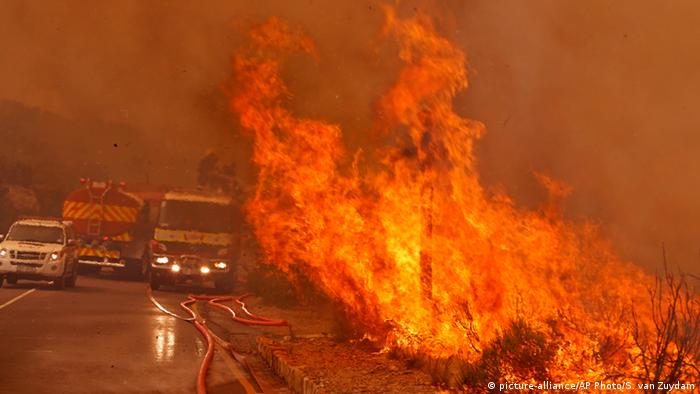 And occasionally the fynbos near Cape Town burns. Here, fire fighters battle a fire near the town of Hout Bay, South Africa

But humans keep reshaping their environments, turning them into fully urban areas or making the bush (at least partly) residential.

Fortunately, the fynbos, as well as burning, offers protection against wildfires, too.

The fynbos has, what Scholes calls, a "complement of things" that hardly burn. He says they can be used horticulturally to protect people's houses.

"For instance, we have a large family of succulents called Aizoaceae. They are pretty little flowering things with a fleshy leaf, and they wouldn't burn if you put a blowtorch on them," says Scholes. 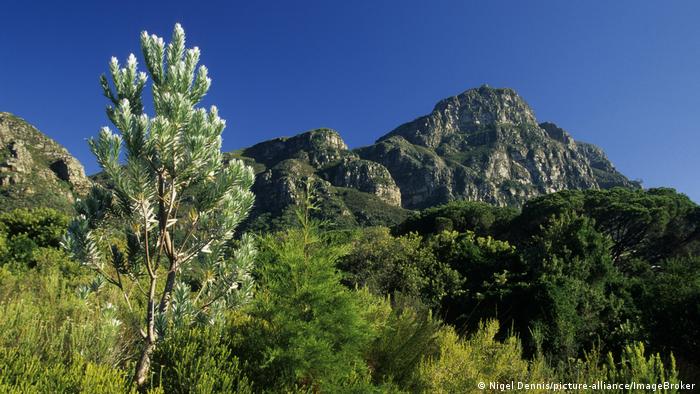 A growing number of people are building homes in the fynbos, a protected area in South Africa

Another common way to protect people and their houses in the bush is by surrounding them with lawn areas.

"Local governments and councils in Australia will give you a list of recommended trees and plant species, and those tend to be moist ones with thick leaves," says Price. "They will still burn, though. So, the best thing you can probably do is have a large expanse wet grass — mown, wet, green grass. A golf course on the outskirts of your suburb is ideal for fire defense."

Theoretically, a few redwoods around your house might be good, but you couldn't just plant a few — we're talking hundreds of years of growth. And the two main reasons they survive fires more often than younger trees, like eucalypts, is their thick trunks and bark and that they are so tall that the fires rarely have a chance of reaching a redwood's crown.

Ultimately, perhaps the best advice is that we develop a better relationship with the land and accept that wildfires are a reality. 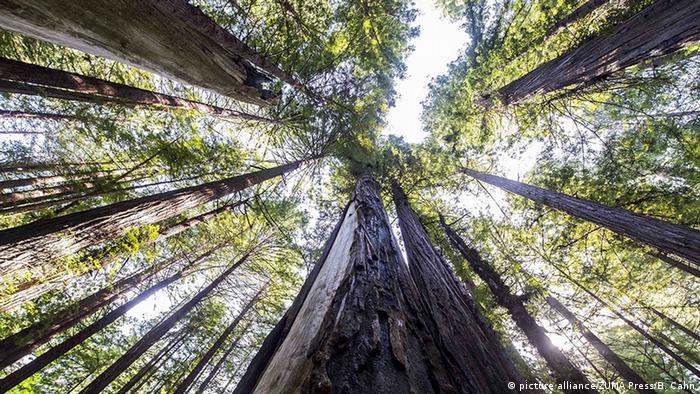 Redwoods in the western USA can survive wildfires, largely because they are too tall for the flames to ignite the trees' crown

"We seem to have this attitude that we are superior to nature, that we can dominate nature, and it plays out in this sphere," says Price. "No one would pretend you could prevent the next earthquake. But people and authorities seem to think that they can prevent the next bushfire from occurring."

There is a movement now, says Price, that's trying to reframe the debate as one of "co-existence" with fire, same as indigenous Australians have co-existed with fire for thousands of years, "reading the landscape."

"As far as society is concerned, it's not necessarily a problem with people putting their houses in the bush, but we do need to understand what the risks are," he says, "and they are that every once in a while those houses will burn down, because there is not very much we can do to stop bush fires."