As wildfires rage, California's governor has issued an executive order banning the sale of new cars powered by fossil fuels within 15 years. But the White House wants to stop the move before a trend is set. 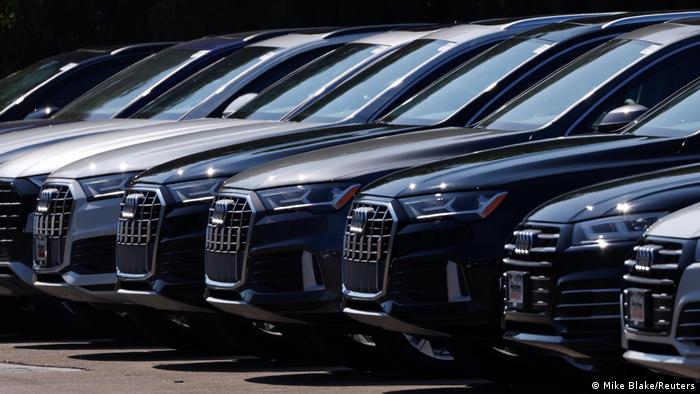 In the fight against climate change and air pollution, California says it will ban the sale of new gas-powered cars by the year 2035, and is encouraging other states to follow suit, despite pushback from carmakers and the Trump administration.

Californian Governor Gavin Newsom on Wednesday announced the executive order that will require all new passenger vehicles sold in the state — with 39.5 million residents, America's most populous — to be zero-emission within 15 years. The governor signed the order on the hood of a prototype red electric Ford Mustang Mach-E at a press conference in the state capital Sacramento. 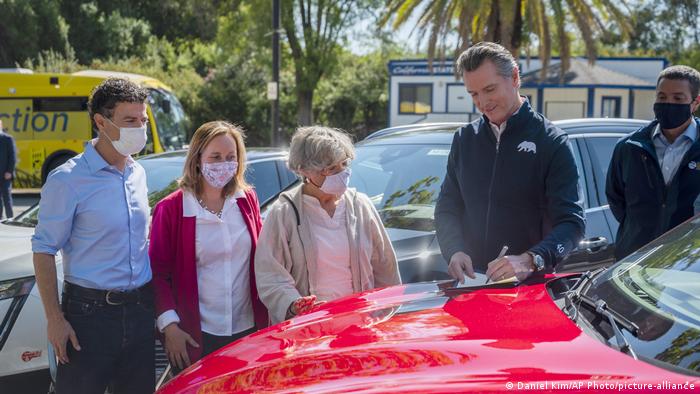 The order is most ambitious move to date made by California or any other US state towards ending the dominance of the internal combustion engine. The move adds California to the ranks of at least 15 countries, including Germany and the UK, that have committed to phasing out the sale of gas-powered vehicles.

"For too many decades, we have allowed cars to pollute the air that our children and families breathe," Governor Newsom said in a press release.

Five of the largest wildfires in the state's history are currently burning in California, part of a record wildfire season that has ravaged an unprecedented 3.6 million acres. California cities like Los Angeles and San Francisco and other West Coast cities in Oregon and Washington state have recorded some of the worst air quality in the world due to the smoke from the fires.

The governor's office said transportation is responsible for over half of the carbon pollution in the state, and that parts of California are currently breathing some of the most toxic air in the country.

The new regulations are also to include a mandate for all medium- and heavy-duty trucks by 2045 "where feasible."

Californians will still be permitted to own and sell vehicles that run on fossil fuels, the governor's office said.

The latest order fits into California's broader goal of cutting greenhouse gas emissions in the state to 80% of 1990 levels by 2050.

Transportation sector emissions in the state have, however, increased in the recent years.

The move flies in the face of the pro-fossil fuel stance taken by US President Donald Trump, who has attempted to block California from requiring the sale of electric vehicles.

"I don't think we should be taking any steps to get rid of fossil fuels," White House economic advisor Larry Kudlow said in a press briefing. "There should be consumer choice for all automobiles,” he said.

Presidential candidate Joe Biden "thinks of it in terms of incentives and investments, not bans," said spokesman for the Democratic nominee Matt Hill.

Electric vehicles should "create a million good-paying union jobs, dominate a fast-growing market worldwide, and meet the demands of the climate crisis," he said in a statement.

"Neither mandates nor bans build successful markets," said John Bozzella, the CEO of an

Electrified vehicles account for less than 10% of new vehicle sales in California, the group said, though this is still higher than any other US state.

The order also calls for the development of California's rail and transit system and greater infrastructure for bicycles and pedestrians. Newsom also called on legislators to ban the oil extraction method known as fracking, but stopped short of issuing an executive order.

To implement the order, California's Air Resource Board (CARB) will now have to create regulation that will turn the governor's mandate into a legally binding requirement.

But the order could still be blocked by the Trump administration, which has sought to override California's authority to set its own car emission rules.

Nearly a dozen states have joined California in a lawsuit against the Trump administration over its attempts to undo vehicle emissions standards set in the state under the Obama administration.

Read more: How divestment stacks up against fossil fuels

If courts uphold the Trump order, which seeks to ban California from setting quotas for electric vehicles, legal experts have the 2035 mandate would not hold.

Accounting for 11% of all US vehicle sales, California's environmental mandates are often taken up by other states.

Newsom's order also calls for cooperation from private businesses, who are to speed up implementing charging networks for electric cars and fueling stations for nonpolluting fuels like hydrogen.

According to the governor's office, zero-emission vehicles will be as cheap or cheaper than traditional, combustion engine cars by the time the order goes into effect.

Presciently, California-based carmaker Tesla on Tuesday announced it would be able to halve the price of its car batteries and that a $25,000 (€21,500) self-driving car would be available within around three years.

By then, experts have said, other carmakers will have similarly competitive offers.