End of an era: Ireland says goodbye to peat to restore its biodiverse bogs

Ireland's letting go of peat as an energy source and restoring many of its CO2-storing bogland ecosystems. That's good news for the climate and, against the backdrop of the UN biodiversity conference, for wildlife. 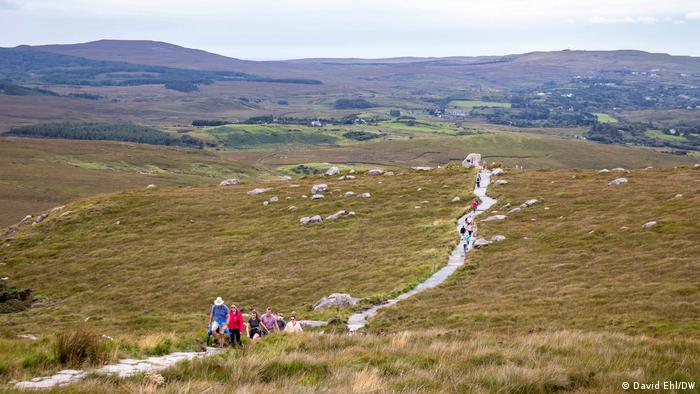 Ireland's peatlands: Where turf was once harvested, are now protected areas and recreational sites

The moss-covered ground yields with each step. It's springy — almost like a trampoline. Evelyn Slevin, who works for the state-run project "The Living Bog," demonstrates why: As she walks ahead, water squirts from the soil underneath her hiking boots. The bog is a wetland that fills up like a sponge with each downpour.

The Carrownagappul Bog in County Galway, on Ireland's west coast, is one of around 900 wetlands on the island regarded as particularly worthy of protection. It's a "raised bog," so called because since the last Ice Age around 10,000 years ago, it has grown into a dome-like structure and is higher than the surrounding land.

Paul Connaughton still remembers when Carrownagappul Bog obscured the view of the woods and farmland beyond. But over the years, the dome has gotten smaller. Those working the bog dug ditches to allow rainwater to drain more quickly and cut layer upon layer of turf to burn in fireplaces and stoves.

Connaughton, now 77, has been cutting turf every year since he was seven. "I saw 20 people standing here, all men, one after the other, cutting turf there now. And you think to look at it now, there was no one in it for 100 years," said Connaughton, as he regarded the expanse. 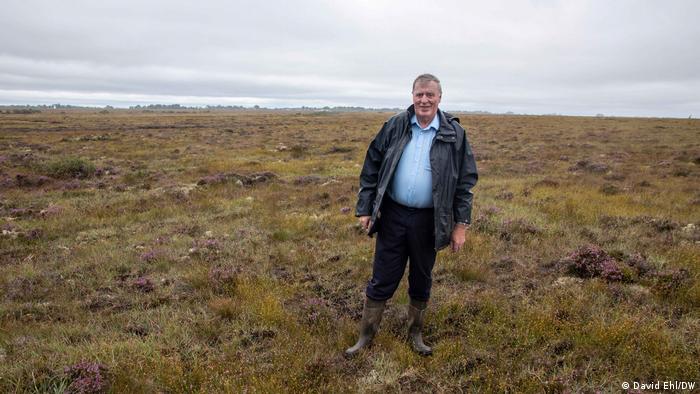 That's thanks to a scheme to restore Carrownagappul to its natural state. Part of the efforts included placing lots of small piles of peaty soil into drainage ditches dotted around the bog.

"It has stopped the water from flowing down," explained Connaughton, a former politician with the conservative Fine Gael party. "And if you keep blocking it miles and miles up that way it will mean that, as time goes by, the bog generally starts growing up."

Some 45 kilometers (28 miles) of drainage canals have been completely or partially plugged. Those working on the restoration placed plastic or metal barriers on the edges of the bogland, where there's more water run-off. Depending on the volume of water they hold, peatlands can be a positive or negative for the climate.

The world's peatlands store twice as much CO2 as all the world's forests, although they cover just 3% of the Earth's land. When the weight of the upper layers of a bog pushes down moss and other plants, they turn into peat instead of rotting thanks in part to the acidic environment. This traps the plants' carbon.

To get to the peat or turf, as it is also known, the water table must be lowered. That triggers a natural composting process that releases part of the CO2 trapped in the turf into the atmosphere. 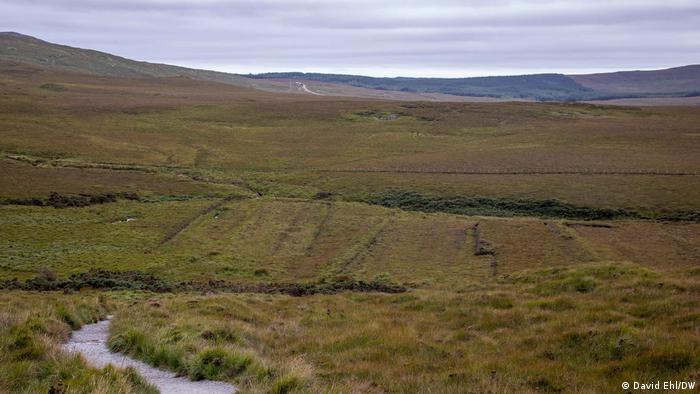 Draining peatlands is estimated to release around 1.3 gigatons of CO2 into the atmosphere a year, which means it's behind around 6% of global human-made carbon emissions or 1.5 times the amount produced by air travel. And that's the biggest argument for restoring Irish bogs, said Florence Renou-Wilson, a peatland scientist at University College Dublin.

"This is all about carbon," said Renou-Wilson. "I could talk a lot about the rare species, but it trumps the fundamental issue: Every day a drained bog is emitting carbon to the atmosphere."

If Ireland were to "put a lid" on those CO2 emissions, it would be a lot closer to its climate targets and "then the biodiversity would come back anyway," added Renou-Wilson.

For centuries, turf has been one of Ireland's central fuel sources, making the otherwise energy poor country less dependent on imports. Today around 20 to 25% of private households heat using turf or peat briquettes. Even though turf is inefficient and its fuel value is much lower than coal's, it's burned in power plants to create electricity. 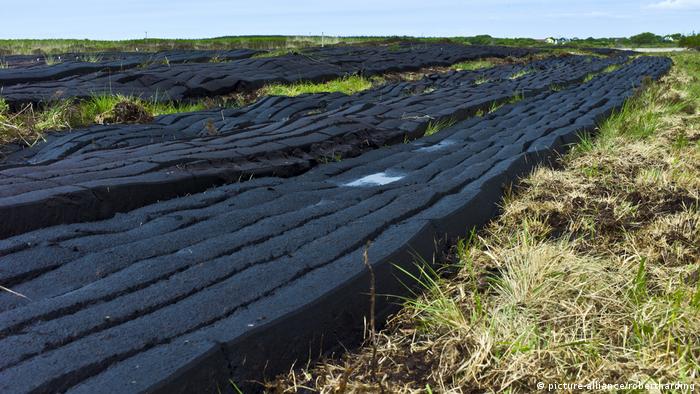 Still, the Irish government is phasing out peat for electricity and in 2020 the last power plant to exclusively use it went offline. Another plant is to switch to biomass by 2023. Ireland's semi-state peat authority, Bord na Mona, which harvests peat on an industrial scale, announced in January that it would cease the practice.

Using funds from the European Union's pandemic recovery scheme, the company is set to rehabilitate some 33,000 hectares of bog that had been transformed into a lunar landscape by heavy machinery.

Heralding the end of turf-cutting

Private turf harvesting is gradually being regulated too. Prior to 2020, there were no government directives on how much turf could be removed, said Renou-Wilson: "The law behind the peatland is terrible. It's [the] Wild West."

But that's all changing.

Turf-cutting was officially stopped in Carrownagappul on May 7, 2011. At the time, tensions were high, remembers Connaughton. Some turf-cutters would rather have gone to prison than put town their "slean," a special spade with a rectangular blade used to cut the peat into blocks. 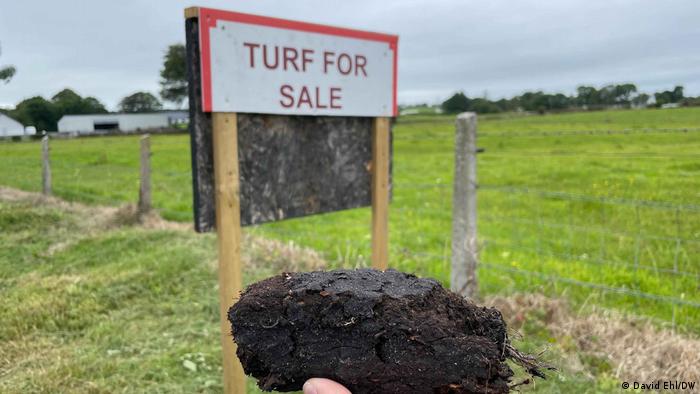 Small-scale turf-cutting is the subject of debate in Ireland

Connaughton, who wears pin-striped suit pants tucked into his wellington boots and a light-blue shirt, vehemently defended the turf-cutters against environmental regulations in his 30 years in the Dail, the Irish parliament. When Carrownagappul was designated a protected area against Connaughton's vote, he found himself at the negotiation table.

Most turf-cutters accepted the government's offer of a €1,500 ($1,735) a year payment for 15 years. Connaughton and around 30 others opted to be a given a patch of bog elsewhere, where they could continue to harvest the turf.

Recreation on the bog

The former politician's sons and daughters all have central heating in their homes now. Still every so often, they like to throw a few turf briquettes from their father's stash on the fire. For many Irish people, turf evokes happy memories, but it's place as a fuel is disappearing in modern Ireland.

Instead, people are enjoying the bog in a different way. During the COVID-19 pandemic, many locals living around the country's peatlands began to rediscover them as recreational areas. Joggers and walkers out with their dogs are a common sight now. It's important to get the local community on board with the restoration project, says Living Bog public awareness manager, Evelyn Slevin. "And it appears to have worked."

Over the next few months, walkways will be laid out in Carrownagappul Bog and once the pandemic restrictions ease further, the plan is to have school children visit to learn more about the area and its flora and fauna.

"I think we're on an even keel now," said Connaughton. "It would be too bad if the public couldn't enjoy the benefits of the bog."

Living Planet: Rich in tradition, but harmful to the climate — Ireland's move away from peat