Federal and state leaders met to discuss how Germany will weather the latest COVID surge. The latest plans include prioritizing PCR tests amid shortages, scaling back contact tracing and a new vaccine ad campaign. 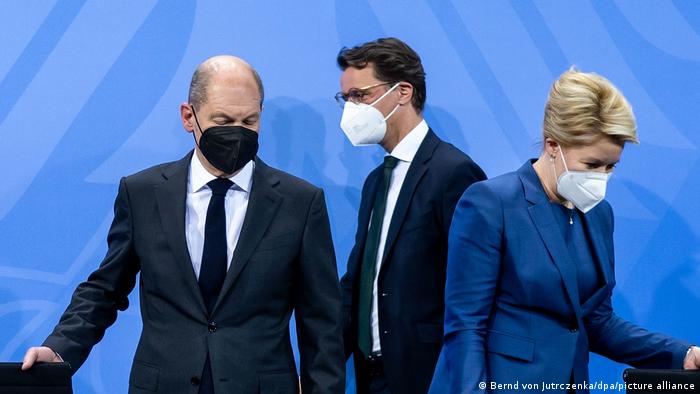 Chancellor Olaf Scholz and state premiers from across Germany held talks on Monday to work out a strategy to deal with soaring coronavirus case numbers.

After the consultations, state and federal leaders said they decided to maintain the country's current course of action in combating the coronavirus pandemic, announcing that no changes to Germany's already strict coronavirus rules were to be expected.

Going into Monday's meeting, Scholz had told Germany's Süddeutsche Zeitung newspaper, "we don't need a change of course," adding, "in any case it's certainly not appropriate to loosen the rules broadly in the middle of the omicron wave.'' State leaders agreed.

What did German leaders decide to do?

One decision made at Monday's meeting pertained to the shortage of available PCR testing capacities. States agreed that rationing them was necessary, ensuring that those with the greatest need — for instance people in hospitals, care facilities or integration offices — should be given first access to them. So far, Germany had been trying to confirm any and all positive rapid tests with a follow-up PCR test, provided for free by the state.

Politicians also called for the prioritization of vulnerable groups when it comes to contact tracing, with Berlin Mayor Franziska Giffey arguing sky-high omicron infection rates have been impossible to keep up with and noting that state leaders had asked health ministers to quickly come up with rules regulating what is in fact "doable" when it comes to comprehensive tracing.

Furthermore, politicians decided to embark on a new public awareness campaign pitching immunization and boosters. Ads on billboards, radio and social media will be aimed at those in Germany who have failed, or refused to get vaccinated against COVID-19, telling them: "Vaccination helps. Even your loved ones."

Hendrik Wüst, premier of North Rhine-Westphalia, Germany's most populous state, reiterated state leaders' calls for a federal vaccine mandate on Monday, saying it was the only way to break the cycle of easing and tightening lockdown rules.

Vaccine mandates fall under the purview of the Bundestag, Germany's federal parliament, which will meet for preliminary discussions on the topic this Wednesday. On Monday, Wüst told reporters that another meeting of state premiers would take place by February 16, at the latest, or perhaps sooner if needed.

Germany has reported a string of new case number records in the past two weeks as the omicron strain takes hold.

The country's Robert Koch Institute for disease control on Monday said there had been 840.3 new cases per 100,000 population in the past week, with 63,393 cases over the past 24 hours.

Health Minister Karl Lauterbach — a trained epidemiologist —  has said he expects numbers to peak in mid-February, potentially with as many as 600,000 new infections per day.

Three shots of the BioNTech-Pfizer and Moderna vaccines were the best protection against severe illness, the CDC found. Meanwhile, Germany reported another record high in daily infection rates. DW has the latest.