President Frank-Walter Steinmeier has called for a thorough debate on compulsory coronavirus vaccinations. Legislation to widen a mandate for certain sectors out to the general public could be voted upon in March. 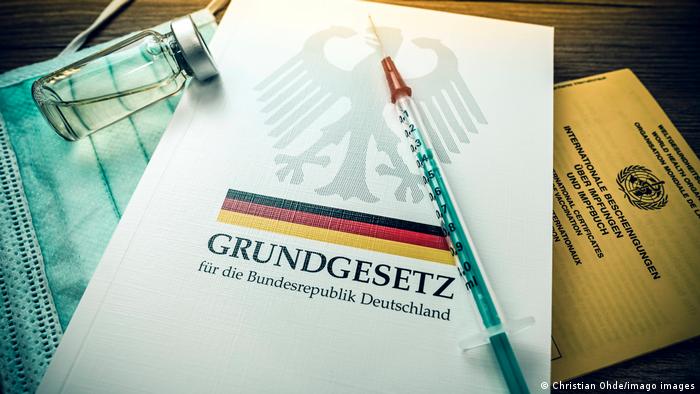 The president said any mandate would also require thorough debate

German President Frank-Walter Steinmeier on Wednesday said a full debate was needed before any general mandate to make COVID-19 compulsory.

While polls show that most people in Germany back compulsory vaccination against COVID-19, a vocal minority is opposed the idea.

What did Steinmeier say?

"The exceptional situation of a pandemic increases the pressure for the state to act, but it doesn't replace the requirement to weigh up arguments and balance interests,'' the German president said ahead of a round table debate on the subject with citizens.

While Steinmeier said he would stay out of the debate, he stressed that different sides must maintain respect for other positions. However, he also said "respect for facts and reason that must be and remain our common currency."

The German president dismissed as "complete nonsense claims that the coronavirus pandemic has turned Germany into a dictatorship."

He said such allegations showed a contempt for Germany's democratic institutions and the rule of law. Steinmeier speaking at the round table event with citizens

What is the situation at present?

Germany's Chancellor Olaf Scholz has said he supports calls for a vaccine mandate, and it is expected that lawmakers will start the debate on legislation later this month.

Speaking in parliament on Wednesday, Scholz said the choice of whether to be vaccinated was "not a decision you make just for yourself, and that's why mandatory vaccination is the right thing to do."

A law was already passed in December that made vaccinations mandatory for certain health and care workers from mid-March onward.

Germany's ruling Social Democrats (SPD) — of which Steinmeier is a member — expect a bill on making COVID-19 vaccination mandatory in Germany to be voted on by parliament in March.

The SPD's Rolf Mützenich said the party was planning an expanded vaccine mandate proposal to be ready after a parliamentary debate at the end of January. He said the lower house would vote on a draft law in March.

"I am very confident that the majority of the SPD parliamentary group will vote in favor," Mützenich said.

Germany's opposition conservative CDU-CSU bloc has said it is open to discussing a general vaccination mandate.

"We are ready for it," said Ralph Brinkhaus, adding that a mandate would not stop the current wave of infection. The conservative bloc has said it will not put forward a proposal of its own on compulsory vaccination.

A question of enforcement

Germany's ethics commission has given its backing in principle to a vaccine mandate. However, the commission rejected any notion that individuals should be physically forced to have the vaccine.

Austria's health minister announced last month the government there would impose fines of up to €3,600 ($4,000) on people who flout a mandate that Vienna aims to introduce in February.

Germany faces a fourth wave of the virus with the rapid spread of omicron and the country's rates of vaccination are relatively low compared with western European neighbors.

Germany registered more than 80,000 new daily coronavirus infections for the first time during the pandemic, according to figures released on Wednesday by the country's Robert Koch Institute for disease control.