Germany's new government wants to make vaccinations compulsory, a move that nearly two-thirds of the public supports. Meanwhile, India's death rate from COVID is at its highest since July. Follow DW for the latest. 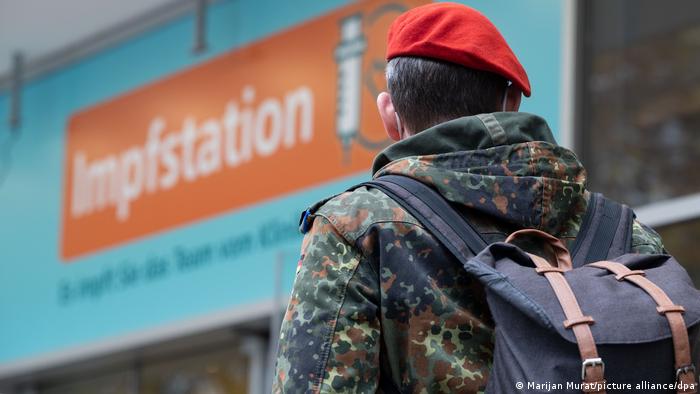 Almost two-thirds of residents in Germany would back a mandate for COVID-19 vaccines, a poll released on Sunday found.

The results showed 63% of respondents supported plans to make immunization obligatory. Less than a third were opposed and 7% gave no answer.

The poll comes days after the government announced its plan to make vaccinations against COVID mandatory in the coming months.

On Saturday, incoming Chancellor Olaf Scholz promised a "completely new campaign" so that millions of people could be vaccinated "in this month of December."

"Winter 2021 is going to be more dramatic than the winter of 2020. We can't stop taking corona seriously," he told the Bild am Sonntag newspaper as he urged Germans to reduce their number of contacts to the absolute minimum.

Austria has seen the third weekend of protests against the government's curbs to stem the winter COVID wave.

Tens of thousands of people turned out in the capital Vienna on Saturday in opposition to the new lockdown and plans to become the first EU country to make COVID vaccinations mandatory.

Around 1,500 people took part in a counter-demonstration, according to police. Several arrests were made for civil disorder offenses.

Austria is in a partial lockdown — scheduled to end on December 11.

Since the lockdown came into effect, infection numbers in the country of 8.9 million have fallen from highs of 13,000 a day to under 10,000.

In Germany, five journalists were attacked during a protest in Berlin on Saturday by the conspiracy theorist group Querdenker (Lateral Thinkers) against the latest COVID-19 restrictions, according to the ver.di union.

Tagesspiegel newspaper reported that three of the reporters were slightly injured and one of its own journalists was among them.

"We are very worried that violence against journalists will increase in the coming months," Jörg Reichel, the Berlin chief of ver.di's journalism branch told the paper.

The protest, involving some 500 people, went ahead despite a ban by Berlin authorities. Most protesters were not wearing masks or socially distancing, according to reports.

Poland and Switzerland have been added to Germany's list of high-risk coronavirus regions, joining
about 60 other countries.

People who return from such regions and are neither vaccinated nor recovered from a coronavirus
infection face 10 days of quarantine.

In the United Kingdom, the travel industry has reacted angrily to plans to reintroduce pre-departure COVID tests for arrivals into the country.

From 0400 UTC on Tuesday, evidence of a negative lateral flow or PCR test taken within the last 48 hours will be required before boarding flights. This is in addition to the required PCR test within two days of arrival.

The Business Travel Association said that the measure would be a "hammer blow", while the Airport Operators Association said, "pre-departure tests are a devastating blow, as they deter people from traveling." 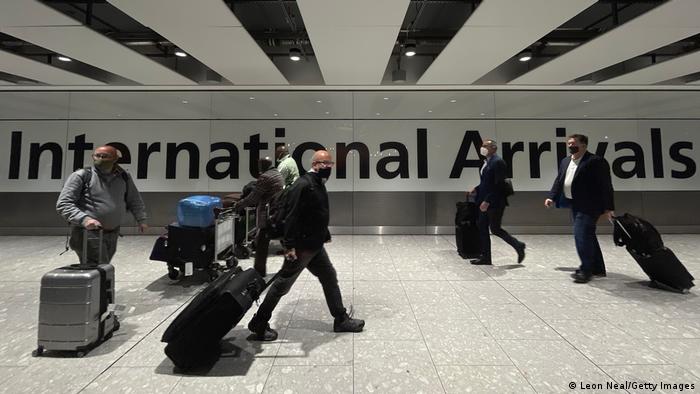 From Tuesday, a pre-departure COVID test from the previous 48 hours is required to enter the UK

New York has announced three more cases of the omicron variant, bringing the number of state cases to eight.

The number of states finding the variant is growing as well, with Massachusetts, Connecticut and Washington state announcing their first cases Saturday, a day after New Jersey, Georgia, Pennsylvania and Maryland reported their first confirmed cases.

The arrival of omicron comes as hospitals statewide continue to strain under a surge in virus cases, most traced to the delta variant, along with staffing shortages.

Ten people aboard a Norwegian Cruise Line ship approaching the US city of New Orleans have tested positive for the virus.

Over the past week, the Norwegian Breakway made stops in Belize, Honduras and Mexico with 3,200 people on board. It is due to return to the US this weekend.

Prior to disembarking, each person on board will be tested, and if found positive, told to self-isolate in accommodation provided by the cruise line, officials said.

Cruise ships were an early source of outbreaks at the start of the pandemic and some ships were rejected at ports. Some passengers died at sea while others fell so ill they had to be carried off the ships on stretchers.

India has reported its highest single-day deaths from COVID since July after two states revised their death tolls.

The eastern state of Bihar added 2,426 unrecorded deaths while the southern state of Kerala added 263 deaths to their tallies on Sunday, a federal health ministry spokesperson told Reuters.

The revised figures took single-day deaths to 2,796, the highest since July 21.

A devastating second wave in March and April this year saw thousands of deaths, and some medical experts think the number of fatalities is far higher than the reported number of 473,326.

Precursors of the recently discovered Omicron variant are likely to have existed for a very long time,
according to their South Africa-based co-discoverer.

"According to current knowledge, an early form of Omicron evolved as a separate virus type even before Alpha and Delta emerged," Wolfgang Preiser of Stellenbosch University near Cape Town told the DPA news agency.

Preiser is a member of the research consortium that discovered the variant in southern Africa last month.

This type of virus then probably evolved over many months without attracting attention, he added.

"The question is: Why did Omicron remain hidden for so long and only now get going? Was one or two
mutations still missing to be able to spread quickly?"

A first case of the Omicron variant has been reported in Senegal, in a visitor who was leaving the country after an international meeting in the capital, Dakar.

Local health authoritiies said late Saturday that the 58-year-old patient arrived in Senegal by air from another West African country on November 22.

He had been vaccinated earlier this year and had no symptoms.

Saudi Arabia has granted approval for people vaccinated with Russia's Sputnik jab to enter the country.

The move will enable Muslims to take part in religious pilgrimages like the Hajj and the Umrah pilgrimages to Islam's holiest sites in the cities of Mecca and Medina, the vaccine's developers said Sunday.

Foreign tourists vaccinated with Sputnik will still be required to quarantine for 48 hours and take a PCR test.

A court in Jordan has sentenced the director of a state hospital to three years in jail over the deaths of 10 patients.

Abdel Razak al-Khashman and four aides were convicted of "causing the deaths" at the Salt state hospital where the patients died after it ran out of oxygen.

The deaths in March sparked public anger in Jordan and led to the resignation of health minister Nazir Obeidat.

Australia on Sunday cleared the first COVID vaccine for children aged five to 11. Health Minister Greg Hunt said provisional approval has been granted for the BioNTech-Pfizer vaccine to be administered to younger children for the first time.

He said the vaccination of 2.3 million Australian children in the cohort will start on January 10, subject to approval from the nation's immunization advisory body.

Countries in the Middle East are bracing for the omicron variant of the coronavirus by restricting travel, announcing lockdowns and closing airports. Meanwhile, international vaccine diplomacy is gaining momentum.