COVID: Is Germany set to introduce compulsory vaccination? | Germany | News and in-depth reporting from Berlin and beyond | DW | 22.11.2021 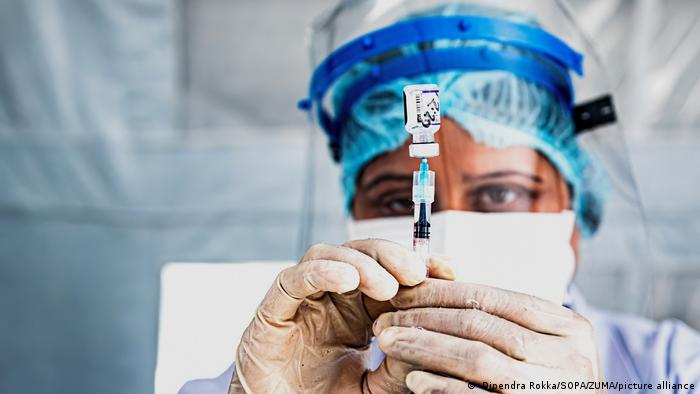 With the coldest, darkest days still to come in Germany, cases of COVID-19 are already soaring and alarm bells are going off at hospitals around the country. The vaccination rate — 68% of the population has at least two shots — is just not high enough to fend off the fourth wave of infections and tame the pandemic.

Germany's voluntary stance on vaccination differs from that of countries such as France and Italy, which have vaccine mandates in place for certain sectors of the workforce and overall have higher rates of vaccination. Austria is set to become the first European country to impose an across-the-board mandate. Even in the United States, famous for its "don't tread on me" attitude toward government, President Joe Biden is pushing the legal envelope to compel people to get their shots.

Despite a tightening of the rules to make unvaccinated life more difficult, the road toward any sort of mandate is long and winding, and its destination uncertain. Both the outgoing government under caretaker Chancellor Angela Merkel and the likely incoming coalition led by Olaf Scholz, of the center-left Social Democrats (SPD), oppose compulsory vaccination.

What does the law say?

Though recent opinion polls suggest that there is broad public support for a vaccine mandate, Germany also has a centuries long history of anti-vax and anti-science sentiment.

There is precedent for a vaccine mandate, however. Imperial Germany had one against smallpox; former East Germany did so against diphtheria and tuberculosis; and the modern German republic implemented a measles vaccine mandate for children and other affected groups early last year, though rulings on legal challenges remain.

Germany's Infektionsschutzgesetz (infection protection law) provides the parliament with the legal wiggle room to mandate vaccination for "at-risk parts of the population" against a "contagious disease that presents clinically severe outcomes and when its epidemical spread is expected."

Such a mandate could happen at the federal or state level.

The issue, however, brings contradictory legal aspects into conflict. Germany's Basic Law obligates the government to protect people's health and safety. At the same time, it forbids it from meddling in personal choices about one's body.

Any mandate would therefore have to be carefully worded to thread that needle — and survive challenges in court. The state would likely also have to demonstrate that it exhausted other, less intrusive means of protecting the population.

What do politicians say?

Not long ago, requiring even a test to ride public transport was a political hot potato in Germany. Now it's becoming the rule. Any discussion of requiring vaccination was met with even more pushback, but the debate is heating up — across parties and coalitions.

A vaccination requirement would come too late to stop the current fourth wave of infections. "But we certainly cannot rule out such a mandatory vaccination for the future, and we must discuss it very seriously," said Andreas Bovenschulte, the SPD premier of the city-state of Bremen, which has Germany's highest vaccination rate of over 90%.

On the federal level, the SPD is set to head a coalition with the neoliberal Free Democrats (FDP) and the Green Party.

"Threatening to impose a general vaccine mandate helps no one," Christine Aschenberg-Dugnus, a health policy spokesperson for the FDP, told the mass-circulation newspaper Bild. Her party is fundamentally skeptical of state intervention and curbing individuals' freedom.

Health policies are the remit of Germany's 16 federal states. Many of them are governed by the center-right CDU/CSU. Bavaria's Premier Markus Söder from the Christian Social Union has seen infection numbers in his state soar dramatically, prompting him to come out in favor of mandatory vaccination.

His counterpart from the western state of Saarland, Tobias Hans, took the opposite position on the political talk show "Anne Will" on public broadcaster ZDF at the weekend.

"The vaccine mandate is not the debate we need right now," he said, fearing that it would drive more people to take to the streets in protest. The rising numbers and stricter rules are enough to convince holdouts "because they're noticing that they're losing their freedoms."

Last week, Merkel met with the 16 state premiers decided on a wide range of measures to curb the spread of the coronavirus. A proposal for mandatory vaccination in the care sector was among them.

They echoed a proposal put forward by Green parliamentary leader Katrin Göring-Eckardt earlier in the week. "We will need mandatory vaccination for institutions, for nursing homes, for day care centers and such places," she said.

What do the experts say?

"Really no one wants a vaccine mandate," Lothar Wieler, the president of the Robert Koch Institute for public health (RKI), told ZDF. "But, when you've tried everything else, the WHO says: You also have to consider a vaccine mandate."

Earlier this month, the German Ethics Council voted that the "option of a job-related mandatory vaccination policy in areas where particularly vulnerable people are being cared for should be seriously and rapidly looked into."

"For places which cater to those in need of care, the sick, the disabled or small children — I am in favor of compulsory vaccination," councilmember Petra Bahr told the public broadcaster NDR on Friday. "However, we have to be careful not to demand it for individual professions, but for workplaces. After all, such a mandate would also have to apply to someone who helps in the kitchen of a large nursing facility."

There are no comprehensive figures on vaccination rates among employees in Germany's health care system. Employees may not be asked to disclose their vaccination status, and so there's no legal basis for a nationwide survey.

In October, the RKI put the vaccination rate for medical staff in hospitals at over 90%. No data is available on employees in nursing homes for the elderly and in outpatient care for the elderly.

The nursing council estimates the vaccination rate among registered nurses to be higher than the country's overall rate. But media reports have suggested otherwise. In early November, a retirement home in the eastern state of Brandenburg saw an outbreak that made headlines across Germany: Several residents died, and the vaccination rate among staff turned out to be only 50%.

Germans will be 'vaccinated, recovered or dead'

"We are against a vaccine mandate for specific groups," Gernot Marx, president of the German Interdisciplinary Association for Intensive Care and Emergency Medicine (DIVI), told reporters on Monday. However, he said, doctors and care workers are bound by a "moral-ethical obligation" to get vaccinated.

Many care workers are skeptical of compulsory vaccination.

The president of the nursing council, Christine Vogler, spoke out against such a step. "Forced vaccination would only trigger resistance," she told the Ärzte Zeitung in early November.

Should the mounting pressure for some kind of mandate translate into passing one into law, the question then would become how to enforce it. There have been so many reports of people using fake vaccination certificates, that the national parliament approved tougher penalties for such forgery.

If it were compulsory, workers who refuse vaccination could face fines — the one for measles threatens penalties of up to €2,500 ($2,800) — or risk suspension or outright termination.

Germany's hospitals are already short-staffed. With a mandate, some officials are concerned that they could lose even more personnel at a critical time.

Opinion: Get vaccinated — and do it now

Germany is headed right into the fourth COVID-19 wave because, in particular, many Germans still don't want to be vaccinated. DW's Oliver Pieper is fed up.

Coronavirus: Will booster shots be the new normal?

Antibodies tend to decrease about six months after the second shot of a vaccine. Many doctors think that booster shots are the solution, but some researchers are also looking into whether T-cells can help.