Lawmakers have so far only passed a mandate for certain health care workers. Now, a narrow majority of experts on Germany's leading ethical body has said it should be expanded to all adults, under certain conditions. 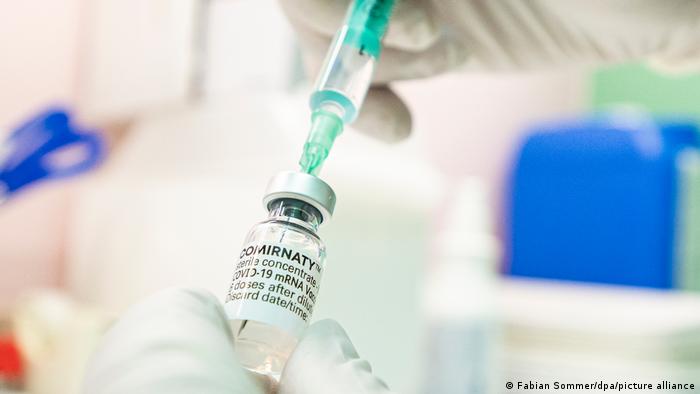 Germany's Ethics Council on Wednesday said it was in favor of mandatory vaccinations for all adults over the age of 18.

National and state leaders asked the body for its assessment earlier this month, with Germany battling a fourth wave of the COVID-19 pandemic.

What was the Ethics Council's decision?

However, the body said it rejected the use of physical force.

It emphasized that high vaccination rates are crucial to moving to a controlled endemic situation with the COVID-19 virus and that the situation seemed particularly pressing at present.

"Currently, the German health care system is reaching its limits in many places. Viral variants such as omicron and expected further variants of the virus are forcing experts to constantly reassess their estimates of the future course of the pandemic."

'Not a panacea for the pandemic'

However, the body said the widening of vaccine mandates was only a part of both curbing the pandemic in the short term and, in the long run, ending it.

"Its extension can therefore only be justified if it is able to mitigate or prevent serious negative consequences of possible future pandemic waves, such as high mortality, long-term adverse health effects on significant parts of the population, or an imminent collapse of the health care system," the group said.

The Ethics Council said the expansion of mandatory vaccination must be flanked by a range of measures that would also improve vaccine takeup.

The body said there should be direct invitations to those obliged to vaccinate, as well as a data-secure national vaccination register, and recommended continuous evaluation and accompanying research.

The body also said mandatory vaccination must be combined with target-group-specific, culturally sensitive, multilingual and easy-to-understand information, including via social media.

"In implementing compulsory vaccination, political actors and state authorities should consciously work to avoid fronts between vaccinated and non-vaccinated people."

What is the German Ethics Council?

The Ethics Council comprises 26 experts from various fields. That includes Protestant and Catholic theologians, members of the Central Council of Jews in Germany, doctors, biologists and lawyers.

Its members are appointed by the German president to advise policymakers and create public awareness of complex and controversial issues.

The council's proposals are not binding.