Germany will cap private events regardless of vaccination status, and bar spectators from large public events. Due to the omicron variant, Chancellor Scholz said the pandemic "won't be over as soon as we'd hoped." 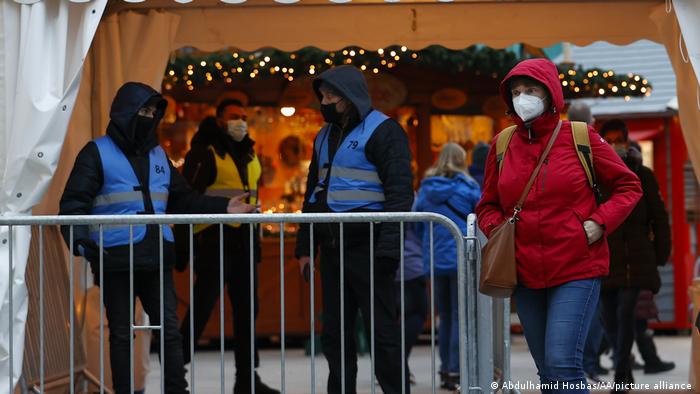 Despite calls from experts for immediate 'maximum contact controls,' the new curbs won't apply until after Christmas

Germany's federal and state leaders on Tuesday agreed to impose contact restrictions — including for vaccinated and recovered individuals — starting next week.

The regulations — which come into effect "at the latest" on December 28 — are aimed to dissuade people from holding and attending large New Year's Eve celebrations amid concerns over the omicron variant.

"Now is not the time for parties in large groups," said Chancellor Olaf Scholz.

Under the new measures, a maximum of 10 people who have been vaccinated or recovered from COVID-19 would be allowed to attend a private gathering.

In cases when an unvaccinated person is present, only one other household would be able to attend. The new capacity limits will apply to both indoor and outdoor celebrations.

Access to restaurants remains limited to people who could provide proof of vaccination or recovery.

One of the significant changes includes stricter rules on large events.

Starting December 28, spectators will be banned from sporting events, cultural shows, concerts and other large public events. An earlier draft had suggested allowing a smaller number of attendees.

Fireworks will also be banned for New Year's Eve celebrations, and night clubs will also be required to close across the country.

Meanwhile, financial support will still be extended to companies and organizations affected by pandemic-related measures.

The German government continued to urge increased vaccinations, not only for those who need a booster but also for people who haven't received their first shot.

Vaccination centers will remain open throughout December and early January, despite the holidays. Scholz's government has also set a new vaccination goal of 80%, and hopes to administer 30 million booster shots by the end of January.

Why do the curbs take effect after Christmas?

Chancellor Scholz said he and the country's 16 state leaders "deliberately decided" to implement the stricter curbs after the Christmas holidays.

"Experience over the past two years has shown that Christmas and Easter haven't been great drivers of infections," Scholz told reporters at a press conference.

He added that families have so far been "cautious and responsible" when it comes to gathering over the holidays.

With the omicron variant becoming more dominant in countries around the world, the coronavirus pandemic "won't be over as soon as we had hoped," Scholz said.

'We expect the number of infections to rise significantly'

While the new curbs fall short of a lockdown, the German government is also preparing for the event that more drastic measures could be necessary next year, lawmaker Johannes Wagner told DW.

"We will do everything which is needed, and on the other side, we do have to prepare a general lockdown, so in case we need one next year, this can be implemented very fast," said Wagner, who is a pediatrician and member of the co-governing Green Party.

German lawmakers in the Bundestag will also debate whether to make COVID vaccines mandatory for the general public — and how they will implement it.

"In my opinion, yes — we need mandatory vaccination next year," Wagner said, adding that it will help "close the gap of people who are not yet vaccinated."

DW political correspondent Simon Young said many in the German government, however, are keen to avoid a return to the more strict curbs seen in 2020.

"I think [the German lawmakers] are guided by all the science, but they are also guided by the desire to avoid large-scale lockdowns," Young said. "It's a balancing act."

Germany's Robert Koch Institute (RKI) for disease control on Monday said that, with the spread of the omicron variant, people who have recovered or had a full first round of vaccine now face a "high" risk of infection.

It said the risk was "moderate" for those who have received a booster and "very high" for the unvaccinated.

The RKI subsequently recommended "maximum contact restrictions" that should "start immediately" and continue until mid-January. It also urged the reduction of travel to the "absolutely necessary."

There were 462 fatalities linked to the virus on Tuesday, bringing the total to 108,814.

Over the weekend, Health Minister Karl Lauterbach ruled out the idea of a lockdown for Germany ahead of Christmas. At the same time, he has warned that the country would face a "massive wave" due to the omicron variant of the virus.

Thirteen police officers were injured in southern Germany on Monday night after authorities tried to end an unauthorized march against coronavirus restrictions.