Demonstrators in the southern city of Mannheim ignored a ban on gatherings and resisted attempts to break up the protests. Meanwhile, more than 17,000 people took to the streets across Mecklenburg-Western Pomerania. 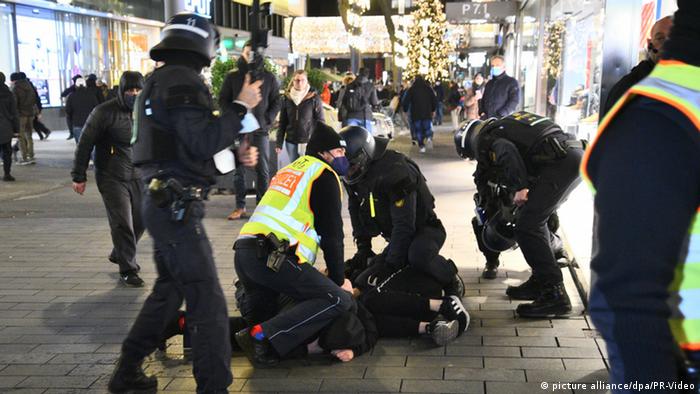 Thirteen police officers were injured in southern Germany on Monday night as protesters reacted angrily to authorities attempting to end an unauthorized march against coronavirus restrictions.

One officer was hospitalized after protesters, who had gathered without the necessary approval from the relevant authorities, resisted efforts by police to end their march through the city of Mannheim. 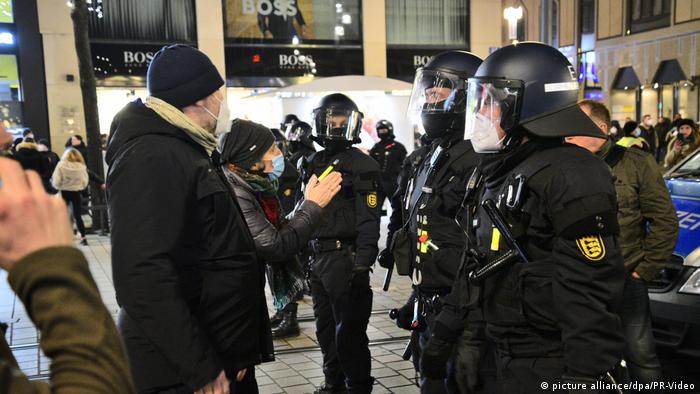 Police said in a statement they had made 13 arrests.

They said they "urged participants to go home peacefully" on Twitter, before later announcing that "the situation in Mannheim has calmed down."

The clashes came at the end of a day when thousands of people gathered across several cities in northern Germany to protest against restrictions.

More than 17,000 people in 20 cities in the state of Mecklenburg-Western Pomerania took part in demonstrations, according to German police.

This was more than double the number of people who took part in similar protests a week earlier in the same state.

In the city of Rostock alone, 10,000 people came to together on Monday evening. Police used loudspeakers in an effort to disperse the crowd, as the event was not authorized.

Minor scuffles broke out between demonstrators and police officers, as protesters brandished placards with phrases such as "We are not interested in compulsory vaccination" and "Corona terror." Among the Rostock signs: 'Corona terror. First the muzzle. Then the deprivation of liberty. Now compulsory vaccination?'

In the state capital of Schwerin, some 2,500 people took to the streets to vent their frustrations, many of whom were not wearing masks.

The situation was similar in the city of Greifswald, located on Germany's northern coast, where several hundred people gathered.

Intensive care beds for coronavirus patients in Mecklenburg-Western Pomerania are at a premium, according to the state's medical authorities.