Thousands of people have demonstrated against coronavirus rules in several major German cities, including Hamburg and Düsseldorf. Pandemic deniers have become increasingly displeased with virus-related regulations. 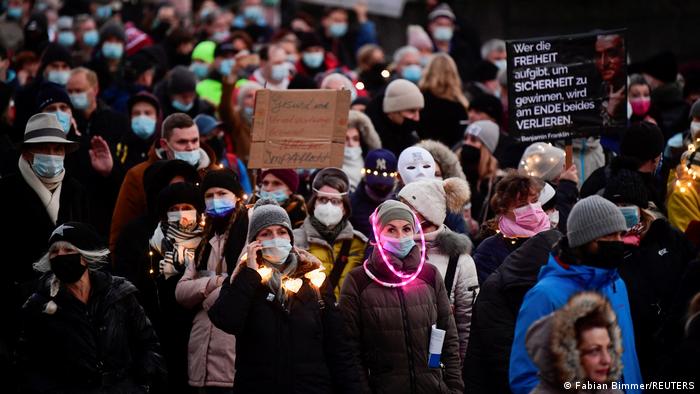 Opponents of vaccinations and the German government's coronavirus policies demonstrated in several German cities on Saturday.

Several thousand people took to the streets in the northern port city of Hamburg, then marched in several blocks through the city center, police said. About 8,000 attendees were registered.

"No to compulsory vaccination!" was written on self-made placards, as well as "Hands off our children." 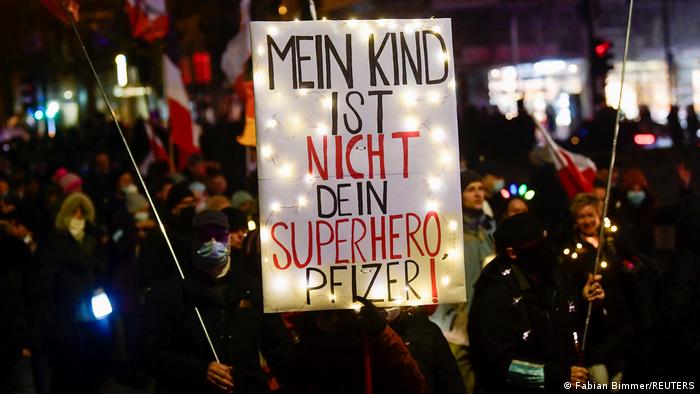 A protester in Hamburg holds a placard with the words: 'My child is not your superhero, Pfizer!'

In the western city of Düsseldorf, police said an estimated 4,000 protesters marched through the city center. Around 1,000 people were registered.

The alliance "Dusseldorf Takes a Stand" had registered a counterprotest with about 200 participants.

Vaccinations for children are beginning in Germany, following recommendations made by the country's top vaccine body. However, many parents are divided on the issue.

Those who are against vaccinations are also up in arms over the possible introduction of compulsory vaccinations in the upcoming year.

Demonstrations also took place in the financial hub of Frankfurt am Main, as well as the southwestern cities of Karlsruhe and Freiburg.

Police said around 3,500 people marched through the center of Freiburg, adding that they sporadically split up groups because some attendees were not wearing obligatory face masks.

Around 900 people took to the streets in Karlsruhe to protest mandatory vaccinations, particularly for health care workers such as nurses.

In Osnabrück, Lower Saxony, nearly 2,000 people demonstrated under the slogan "Basic rights are not negotiable," according to police.

Around 1,900 people attended a protest against restrictions in Schwerin, the capital of the northern state of Mecklenburg-Western Pomerania, police said. The protesters reportedly marched peacefully through the city center.

Institutions in the town of Greiz in the central state of Thuringia issued joint calls for social cohesion and respect in the face of the ongoing protests. Last Saturday evening, 14 police officers were injured during coronavirus protests in the town.

Meanwhile, officials in Berlin banned a demonstration that had 2,000 registered protesters, citing the expectation that demonstrators would violate coronavirus rules such as the obligation to wear a mask and maintain social distance. However, protesters have gathered on many occasions despite police bans.

Police in the eastern German state of Saxony shut down gatherings organized by the Querdenker, or "lateral thinkers" group. People demonstrated in several parts of Dresden, which is one of the cities where the Querdenker movement is most popular.

Meanwhile, in Rathenow in the state of Brandenburg, 360 police officers stopped a protest on Friday evening, citing a lack of people complying with mask requirements.

Germany has a relatively low vaccination rate, with just 70% of the total population inoculated against the virus. Over 6.76 million cases and 108,000 deaths have been reported since the start of the pandemic.

Germany's Health Minister Karl Lauterbach warned of a "massive fifth wave" due to the omicron variant. Follow DW for the latest.