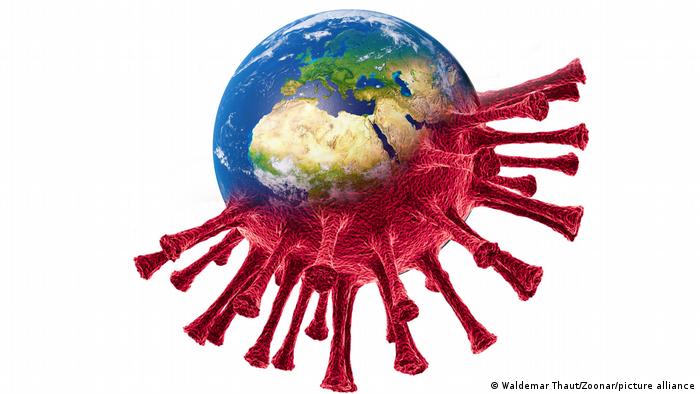 So, that's that: It won't be a Merry Christmas after all.

It's only a matter of time before we're hit by the full force of omicron infections — a case of, "not if, but when." And that when won't take long. That's what three of Germany's top researchers said during a virtual nationwide press briefing Wednesday (15.12.2021).

Christoph Neumann-Haefelin, an immunologist at the University Medical Center Freiburg, said omicron will likely become the dominant variant of the coronavirus, SARS-CoV-2, by mid-January — superseding the delta variant, which until now has been one of the most infectious variants since the COVID-19 pandemic began.

Neumann-Haefelin predicts that infection rates will shoot up dramatically — possibly to hundreds of thousands per day.

That dark prognosis is based on international data that German researchers have been studying. Take for instance the United Kingdom, where omicron infection rates are doubling every two to three days.

Dirk Brockmann, a physicist at Humboldt University of Berlin, says that's a factor of three-to-four-times higher than infection rates with previous variants.

They think it's possible that 20-34 million people could become infected with omicron between now (December 2021) and April 2022 — that's about half of the UK population — despite reinforced rules on social distancing, medical masks, school closures and more.

"I'd be surprised if we didn't see a similar situation here in Germany," said Brockmann.

Brockmann says politicians have to act immediately, setting up emergency plans for a range of scenarios and then putting them into action.

"We have to slow the spread of the virus to limit the damage," according to Brockmann. But, he admits, it will be impossible to stop it outright.

Germany's experts say communities will have to reduce social contacts and people's movements drastically, similar to what they did in the very first lockdowns.

"But we'll have to do a whole lot more given the speed with which this variant is spreading," Brockmann said.

At risk even if you're boosted

Omicron is not only more infectious than other variants of the coronavirus, it can also evade our human immune responses — what experts call "immune escape."

That means people who are double jabbed and even those who have had booster shots, can still get infected.

A booster jab will pump up your protection to 70-75% and it will also reduce your risk of a severe infection but that could also lend you a false sense of security, said Sandra Ciesek, director of the Institute of Medical Virology at the University Hospital Frankfurt.

Ciesek said while it was important to get the unvaccinated vaccinated, first jabs would not be enough to fight off omicron.

"It takes many weeks for the immune system to develop a defense," she said. "The virus moves faster than that."

Ciesek went on to say that omicron was likely to be just as dangerous as other variants of the virus — despite some reports suggesting it may only cause mild infections.

Initial data from the UK and Denmark show that hospitalization rates for people infected with omicron are not much different from those infected with the delta variant.

At the start of the omicron wave, reports from South Africa gave hope that the variant was less dangerous than delta, as many people there experienced only mild infections.

But since then, an increasing number of people infected with omicron have had to be hospitalized. The UK was the first country to report a death with omicron.

Ciesek said it was hard to compare the European situation with that in South Africa, where the population is on average younger, and where many people have had a previous coronavirus infection.

Take, for example, the UK again: Estimated hospitalizations of between 3-5,000 people would put a strain on the "entire machinery," said Brockmann.

Many hospitals are struggling as it is and they won't be able to accept many more patients, especially as more patients mean higher risk of medical personnel getting infected as well.

Brockmann said we could see a cascade of effects, not all of them predictable. So researchers are calling on politicians to act decisively — "Time is running out," said Brockmann.

Ciesek, too, said she felt that Germany was ill-prepared, adding that she was very concerned about the situation.

Granted, these are worst-case scenarios but the three experts agreed it won't be enough to just hope omicron shows itself to be less dangerous than other variants.

Neumann-Haefelin said such wishful thinking would be akin to "walking into a catastrophe with open eyes."

This article was translated from German by Zulfikar Abbany