Researchers in South Africa say there appears to be evidence that the omicron strain of coronavirus is less virulent than delta. In the US, New York state is to reintroduce its mask mandate. Follow DW for more. 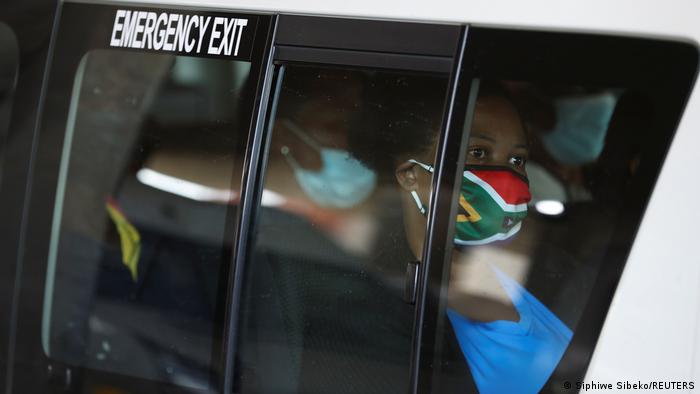 In South Africa's worst-hit region, tests showed that the omicron variant was behind about 70% of the cases

Scientists in South Africa say they see no sign that the omicron variant of the coronavirus is causing more severe illness.

"Preliminary data does suggest that while there is an increasing rate of hospitalization ... it looks like it is purely because of the numbers rather than as a result of any severity of the variant itself, this omicron," Health Minister Joe Phaahla said on Friday.

In fact, early hospital data from the country shows less than a third of patients admitted to hospital during the latest wave linked to the omicron variant are suffering severe illness, compared with two-thirds in the last two waves.

In the past few days, a nationwide outbreak linked to omicron has been infecting around 20,000 people a day.

In the country's worst-hit region — Gauteng province, which includes Johannesburg and Pretoria — the number of cases rose by 400% week-on-week.

Tests showed that the omicron variant was behind about 70% of the cases.

A small study from a South African research institute this week suggested that omicron could partially evade protection from two doses of the BioNTech-Pfizer vaccine.

But the two companies say a three-shot course of their vaccine can neutralize omicron in the laboratory.

A similar UK study found that a third booster shot reduces by up to 75% the chance of experiencing mild COVID symptoms. Israeli researchers also said Saturday they found that a three-shot course of the BioNTech-Pfizer jab provided significant protection against the new omicron variant.

COVID-19 Special: Where did omicron come from?

Dutch authorities arrested a man who allegedly offered to supply coronaviruses for self-infection on the internet, the anti-fraud unit of the Ministry of Finance (FIOD) has reported.

Dutch newspaper De Telegraaf reported that a so-called corona kit was offered to be sent by post for €33.50 ($37.91), and that it allegedly contained a tube with a virus liquid and a self-test.

The suppliers said the viruses were not older than three months and that buyers could be "sure that the latest mutations and variants are included."

The website has been shut down as authorities investigate the case.

Amid concerns that the omicron variant could soon be the most dominant, experts in Germany are calling for shorter vaccination intervals, with a fourth COVID shot.

Meanwhile, Germany's logistics sector has warned against a hasty introduction of compulsory vaccinations.

Frank Huster, managing director of the German Association of Freight Forwarders and Logistics (DSLV), said many foreign drivers have received vaccines such as Russia's Sputnik V, which is not approved for use in the European Union.

Huster said a vaccine obligation could lead to thousands of drivers being refused entry to Germany.

He said the freight sector is already experiencing an acute shortage of drivers.

Germany's new government plans to make vaccinations mandatory from early next year. It has already passed a law to force medical and care workers to get fully immunized.

Around 10,000 people joined a protest against coronavirus restrictions in Hamburg, according to the German dpa news agency.

In Austria, tens of thousands of demonstrators took to the streets to protest COVID restrictions, including mandatory vaccinations and home confinement orders for the unvaccinated.  Police said an estimated 44,000 people attended the rallies.

Three people were arrested for offenses including the use of fireworks and disregarding the requirement to wear masks, police said. Journalists covering the event were attacked with snow balls and ice, authorities said. In the UK, the omicron variant is responsible for 30% of new COVID infections in London, Communities Secretary Michael Gove said Friday.

After chairing a meeting of ministers and scientists, Gove said London and Scotland were hotspots for omicron and the situation was "deeply concerning."

New data suggests that omicron will now become dominant by as early as next week, he added.

Gove said the UK government is now considering tougher restrictions after Prime Minister Boris Johnson introduced his Plan B on Wednesday, which includes a mask mandate and working from home, wherever possible.

Brazilian Supreme Court Justice Luis Roberto Barroso has ruled that all travelers arriving in Brazil must present a vaccine passport proving that they have been vaccinated against COVID-19.

Barroso said the requirement for proof of vaccination can be waived only when the traveler comes from a country where no vaccines are available or the individual was prevented from vaccination due to health reasons.

Barroso's ruling must be reviewed by all 11 judges of the Supreme Court next week.

In the United States, a Navy commander has been fired from his job as the executive officer of a warship because he refused to get a COVID vaccine or be tested for the virus,

Cmdr. Lucian Kins was relieved of his duties Friday as second-in-command of the USS Winston Churchill, a destroyer.

Officials said Kins was the first naval officer to be fired as a result of a vaccine refusal.

The Pentagon has made the vaccine mandatory for all service members, and Navy personnel were given until late November to get their shots or request exemptions.

Thousands of service members have asked for religious exemptions, but so far none of the military services have approved one.

Meanwhile, US rail operator Amtrak says it will need to reduce service in January unless more of its staff get vaccinated.

He warned that any service cuts would last until March "or as soon as we have qualified employees available.''

New York state is to reintroduce its mask mandate due to a cold-weather surge in virus infections.

From Monday, masks will be required in all indoor public places unless the businesses or venues implement a vaccine requirement.

Across the US, the seven-day average of COVID-19 cases was up 37% and average deaths per day climbed 28%, Centers for Disease Control and Prevention Director Rochelle Walensky said on Friday.

In India, the largest syringe and needle manufacturer has urged Prime Minister Narendra Modi to revoke an order to suspend the production of its products.

The decision triggered concerns of an acute shortage of materials for the country's COVID vaccination program.

The production ban is part of a drive to combat pollution and improve air quality.

Taiwan has confirmed its first three cases of the new omicron variant.

The three infected people were all inbound travelers — two Taiwanese nationals and an American, who entered the island this week.

One of the Taiwanese nationals had returned from the southern African country of Eswatini (formerly Swaziland).

A New Zealand man has been labeled "unbelievably selfish" after he received up to 10 COVID-19 vaccines in one day.

The news website Stuff said the man, who has not been named and is now under investigation, visited several vaccination centers.

Local media reported that he was paid to take the shots on behalf of other people, pretending to be the individuals who had allegedly hired him.