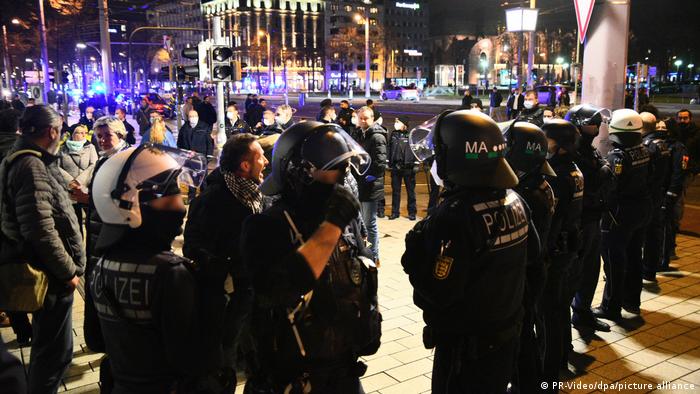 Protests against coronavirus restrictions took place in several cities around Germany, with officers injured in Mannheim and Thuringia

The rally, which had been organized since last week on the encrypted Telegram chat app, surprised police in its size.

Police told local media the "Querdenker" movement, which roughly translates as "lateral thinkers," was behind the protest action. 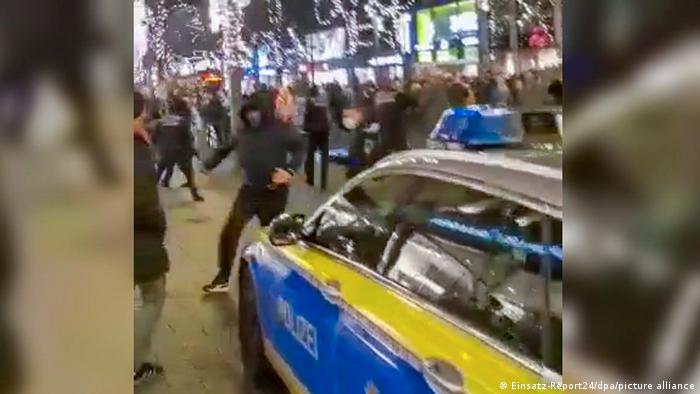 What happened in Mannheim?

The event was not registered with city authorities, who moved to ban it by 6:30 p.m. local time (1730 GMT). The protesters who had already gathered were informed of the ban on their march and told they were barred from the center of Mannheim for the rest of the evening.

Protesters reacted by ignoring police, as their numbers grew. They subsequently formed a procession in the direction of Paradeplatz in the city, according to police, who tried to stop the marchers as they splintered off into smaller groups.

Three officers were injured when protesters attempted to break through a police barrier, with three more on duty injured elsewhere in the city that night.

For a brief period, 10 counter-demonstrators gathered in the center. Police said they prevented a clash between the two groups.

Only when police amassed in significant numbers did the protest break up.

About 120 people who refused to comply with police orders were arrested, and a total of 121 were charged with violations of the law of assembly. Three individuals are facing criminal proceedings for various offenses.

The last traffic closures caused by the demonstration were lifted at 10:15 p.m. on Monday night, police said.

Elsewhere in Germany, approximately 3,500 protested in Magdeburg and 2,900 gathered in Rostock in the state of Mecklenburg-Western Pomerania, both cities of former East Germany.

In the eastern state of Thuringia, police said 6,000 people protested at a total of 26 banned demonstrations, which left seven officers injured.

Smaller protests also took place in Gummersbach in the western state of North Rhine-Westphalia, where 500 gathered.

In Saxony, police cordoned off 100 people protesting in a supermarket parking lot, but let their march continue in the end, because it became impossible to distinguish between demonstrators and supermarket customers.

In Dresden, police said just over 100 gathered in the city center to register their voices of dissent against current COVID-19 protocol in the country.