New Chancellor Olaf Scholz has told a newspaper that he is "also the chancellor of the unvaccinated." He insisted the country is not split over the urgent need to get the population fully protected against COVID-19. 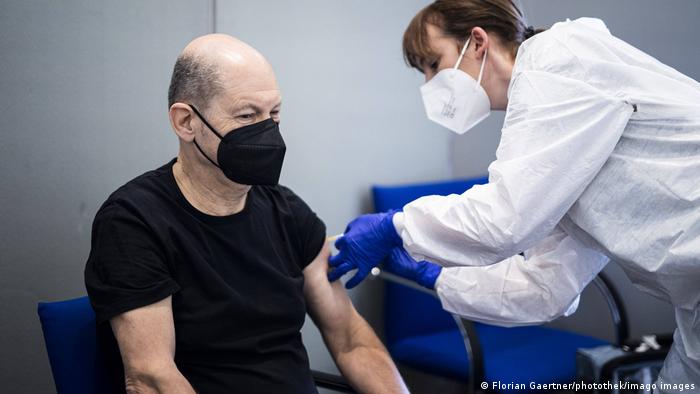 Germany's new Chancellor Olaf Scholz on Sunday denied that the COVID-19 pandemic has split the nation between the vaccinated and unvaccinated.

"Germany is not divided!" Scholz said in his first interview as leader, with Europe's best-selling newspaper Bild am Sonntag.

Scholz was sworn in as chancellor on Wednesday and his center-left Social Democrats (SPD) are in coalition with the environmentalist Green Party and the business-focused FDP.

The new German leader said that, while the vast majority of residents have been vaccinated, many others still want to but must first overcome their reservations.

"Having different opinions does not equal division. We are also allowed to argue," he told Bild am Sonntag.

'We need to do better to get these numbers down'

'Chancellor of the unvaccinated'

Scholz claimed that he is "also the chancellor of the unvaccinated," adding that he "would still like to convince them that vaccinations make sense."

His comments come despite his new administration backing Angela Merkel's lockdown for unvaccinated people and Scholz's plans for mandatory vaccinations.

In her last major policy announcement in office, Merkel restricted the movements of unvaccinated people to essential service providers, like grocery stores and medical establishments.

Ahead of his appointment, Scholz announced that he would ask parliament to vote on a new law that makes COVID vaccinations mandatory.

Last week, both chambers of Germany's parliament approved a vaccination mandate for medical and care staff from the spring.

Vaccine obligations are widely supported by the German public, according to a recent poll. However, the World Health Organization has said the measure should be a "last resort."

Scholz told the newspaper that MPs should be able to vote on the issue "according to his conscience" without being forced to support their parliamentary group.

"I myself will vote for compulsory vaccination because it is legally permissible and morally right."

Last week, both chambers of parliament approved a vaccination mandate for medical and care staff from the spring.

During the interview, Scholz also referred to the angry torchlit protest — reminiscent of those by the Ku Klux Klan white supremacist movement — outside the home of Saxony's health minister last weekend.

"I am convinced that the vast majority of unvaccinated people find these torchlit rallies as repugnant as I do," he said.

Scholz added that Germany was a country "where most people keep to the law, not because the police control us, but because it is part of our nature to obey such rules."

Public feedback will be sought

Scholz also used the interview to set out how his administration plans to receive regular feedback from the public.

"We plan regular encounters, face-to-face or in digital formats," he told Bild am Sonntag, adding that he would benefit from the two-way conversation "because it grounds me and I gain a lot of additional insights."

Scholz said he hoped that people would start to feel more positive about the future.

"Unfortunately, many citizens have not been sure for a long time whether their future will be better. That is not good, it endangers cohesion in our society. We need more confidence again."

The new chancellor also vowed to take people's fear of inflation seriously, saying that his government "won't be idle" if inflation doesn't ease next year.