Three shots of the BioNTech-Pfizer and Moderna vaccines were the best protection against severe illness, the CDC found. Meanwhile, Germany reported another record high in daily infection rates. DW has the latest. 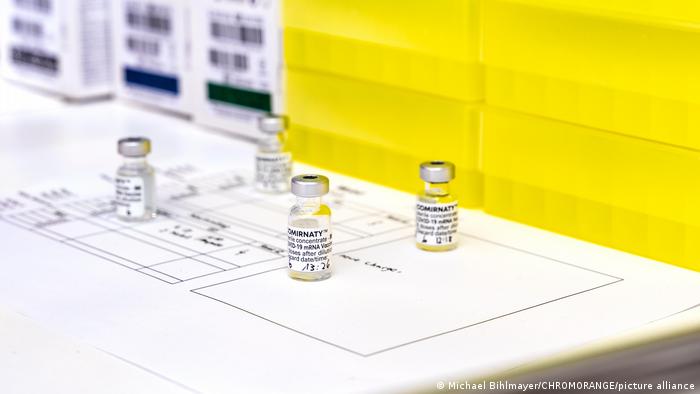 The US Centers for Disease Control and Prevention (CDC) said on Friday that a third shot of the BioNTech-Pfizer and Moderna COVID-19 vaccines was the most effective way to protect from the latest variants, according to three studies the agency conducted.

Boosters of the BioNTech-Pfizer and Moderna vaccines were about 67% effective against omicron-related symptomatic disease compared with unvaccinated people, researchers found.

"It really shows the importance of getting a booster dose,'' said the CDC's Emma Accorsi, one of the study's authors.

The CDC studies found that just two doses offered no significant protection against omicron. Omicron has become the variant responsible for the most new coronavirus infections in Europe and the United States.

The three studies evaluated data from COVID-related emergency room visits, urgent care clinic visits, hospitalizations and deaths across several states from last year and into January 2022. The studies evaluated only the BioNTech-Pfizer and Moderna vaccines since they are the two options the CDC prefers as booster shots.

EU health ministers were told to prepare to deploy a fourth dose of COVID-19 vaccines as soon as data showed it was needed.

The EU drugs regulator said it would be reasonable to give a fourth dose to people with severely weakened immune systems, but added that more evidence was needed.

"If we see data which is conclusive on whether a fourth dose is needed, we need to be ready to act," European Health Commissioner Stella Kyriakides told EU ministers in a video conference.

Omicron is now the dominant coronavirus variant circulating in the European Union, the bloc's health agency said on Friday. The Stockholm-based European Centre for Disease Prevention and Control (ECDC) said omicron was now dominant in Europe with a "78% pooled prevalence."

The German Hospital Federation (DKG) has warned about a rising number of hospital staff falling sick with COVID-19 following a recent survey carried out by the German Hospital Institute. In more than half of the country's hospitals, there was an increase between 5% and 20% in staff calling sick. Most of them were nurses.

The staff shortages are "currently a much bigger problem than in normal years," said the chairman of the DKG, Gerald Gaß.

France's Constitutional Council approved the government's planned vaccine pass. The pass will require people over 16 to have a certificate of vaccination to enter public places like restaurants or cinemas.

But the court tacked on one condition — that the pass should not be required to attend political meetings — and added that the rule should end as soon as it is no longer necessary.

Ireland will scrap almost all its pandemic restrictions, including those on hospitality, sporting events and the requirement for proof of vaccination at indoor venues, a senior minister said.

The government will still require people to wear masks on public transport and in shops until the end of February, as well as continue some measures in schools, Justice Minister Helen McEntee said in a video posted on Instagram following a government meeting.

The Russian capital, Moscow, has reported a record number of new coronavirus infections over 24 hours, according to a government tally.

The figures come as Russia — one of the worst-hit countries — prepares for a fresh wave of cases thanks to the omicron variant.

Russia as a whole recorded 38,850 new cases Thursday, a figure edging toward the record set in November.

Austria's Parliament passed a mandate that will require all adults in the country to get vaccinated against COVID-19 beginning in February. The move makes Austria the first EU country to pass a vaccine mandate, despite tens of thousands of angry citizens continuing to protest such measures in Austria and across Europe.

The law enjoyed broad support in Parliament, with only far-right legislators voting against it in a 137-33 tally. After an "introductory phase" ending mid-March, those who refuse to get the shot will face fines of up to €3,600 ($4,084). The mandate only applies to adults and makes exemptions for pregnant women and people with medical conditions that prevent them from getting the jab.

Africa's top public health bodies called for donated COVID-19 vaccines to come with a shelf life of three to six months so countries could plan their distribution.

The director of the Africa Centres for Disease Control and Prevention, John Nkengasong, said 2.8 million vaccine doses had expired on the continent.

He added that most expired doses were donated through the global vaccine-sharing scheme COVAX and arrived with "very short notice."

"Many countries indicate that they would like vaccines to be donated with at least three months of shelf life, if not more," the World Health Organisation Regional Director for Africa, Matshidiso Moeti, said.

New Zealand has ruled out lockdowns but will tighten pandemic measures across the country if there is a domestic transmission of the omicron variant, Prime Minister Jacinda Arden told reporters.

The nation will impose a "red" traffic light protocol within 24 to 48 hours of an omicron diagnosis in the community, Ardern said. The measure would make masks mandatory and put caps on public gatherings.

In Taiwan, people will have to prove that they are fully vaccinated to get into entertainment venues from Friday.

More than 70% of people in Taiwan have received two vaccine doses, but only about 10% have had their third shot so far.

Thailand will allow quarantine-free travel for fully vaccinated tourists beginning February 1. The country's Coronavirus Task Force made the announcement Thursday, saying the "Test & Go" plan that began in November but was suspended last month due to questions over the highly transmissible omicron variant, would begin again as hospitalizations and deaths had not gone up over the past month.

According to the plan, fully vaccinated tourists must undergo testing for COVID-19 upon arrival, then isolate in a hotel until they receive a negative test. Moreover, visitors must undergo another follow-up test after five days as well as download a government tracing app. The plan was originally introduced as an alternative to a previous two-week mandatory quarantine.

Thailand has suffered tremendous financial loss as a result of the pandemic, which has crushed the country's tourism industry. The country expects to welcome only five million tourists this as compared to nearly 40 million each year before the advent of the virus.

In the United States, a federal judge in Texas ruled against President Joe Biden's requirement that federal employees be vaccinated against COVID-19.

Biden had issued the order for roughly 3.5 million federal workers to get vaccinated by November 22 or seek a religious or medical accommodation to avoid facing discipline or firing. US District Judge Jeffrey Brown said in the question was if Biden could "require millions of federal employees to undergo a medical procedure as a condition of their employment," saying that it was a "bridge too far" under the current state of the law, citing a Supreme Court decision that blocked vaccine requirements from the US government on private businesses.

The World Health Organization said bans on international travel have proved ineffective. Meanwhile, the English will lower their masks. Follow DW for the latest coronavirus news.

Germany's weekly incidence rate has also risen. It now stands at 584.4 new infections per 100,000 people over seven days. Case numbers have been rising consistently as the omicron variant starts to assert itself.