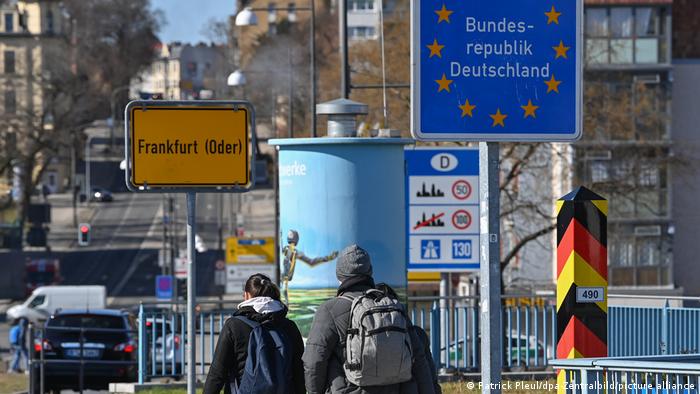 The German government on Sunday added Austria to its list of high-risk travel destinations, meaning all nine of Germany's neighbors now have the designation.

Anyone crossing the borders who has not been vaccinated or recently infected must go into quarantine for 10 days. The isolation period can be shortened if they provide a negative test.

The Netherlands, Belgium, Luxembourg, France, Switzerland, the Czech Republic, Poland and Denmark were already on the list. Austria was taken off the list in December.

EU countries have been reporting record infections as the omicron variant spreads.

Almost 140 out of about 200 countries in the world are designated high-risk by Germany.

Germany itself has recorded a new high in its seven-day incidence of new cases, the Robert Koch Institute (RKI) for disease control said on Sunday.

There were 515.7 new infections per 100,000 people per week on Sunday, marking the first time the measure has exceeded 500 in the country.

German health authorities recorded 52,504 infections in the last 24-hour period, with 47 deaths. A week earlier, with a daily count 36,552 was recorded.

Omicron accounts for over 70% of new cases across Germany

The United Kingdom is drawing up plans under which people will not be legally obliged to self-isolate after contracting the coronavirus, British newspaper The Telegraph reported on Sunday.

Prime Minister Boris Johnson wants to scrap emergency COVID laws as Britain's cases continue to fall, the report said, adding official guidance would stay in place but there would be no fines or legal punishment if flouted.

In Denmark, cultural and entertainment spots are being reopened after about a month, as — despite a high number of infections — the government relaxes rules.

Museums, zoos and amusement parks were all opened up again, along with cinemas, theaters and concert halls.

Capacity limits are still in place and, in most places, visitors must wear masks.

Nightlife venues will stay closed until the end the month.

With a population of just 6 million, Denmark has regularly recorded more than 20,000 case per day, with more than 25,000 cases on Saturday alone.

As numbers in Europe spiral upward, the World Health Organization has warned of a "closing window of opportunity'' for European countries to keep their health care systems from being overwhelmed by the omicron variant.

Germany's army, the Bundeswehr, is investigating 50 to 60 soldiers who have refused to be vaccinated against COVID-19, despite a vaccine mandate for all 180,000 soldiers, German magazine Der Spiegel reported on Sunday.

The refusal to get the vaccine has been classified as insubordination since the end of November. Soldiers who still refuse may face disciplinary action.

A far-right, anti-vaccine and anti-immigration protest marched through the Hungarian capital Budapest on Sunday.

Around 60% of the population is fully vaccinated and around a third have received a booster shot. But the spread of omicron has caused a surge of cases, facilitated by the lack of restrictions.

Thousands of protesters in the Netherlands marched through Amsterdam on Sunday to express opposition to the government's COVID-19 restrictions and vaccination campaign.

The Dutch government eased its almost monthlong lockdown earlier in the week under public pressure, despite rising infections. The country reported another record number of cases on Sunday, reaching over 36,000 in one day.

Malta saw one of its biggest protests against coronavirus restrictions on Sunday. Hundreds of people marched through the capital Valetta in opposition to new rules requiring people to show a COVID certificate to access most public venues.

The Mediterranean island nation has one of the highest vaccination rates in the EU with some 95% of people fully vaccinated and around three-quarters of adults having received the booster shot by Sunday.

The aim, he said, was to reduce the risk of losing dosses by them being thrown away unnecessarily.

Cevallos said the government had asked one of the laboratories that supply vaccines to issue them with an expiration of up to 6 months. The producer — which was not named on the grounds of confidentiality — refused, saying the dates were pre-set.

Peru has one of the highest per capita COVID-19 mortality rates in the world. It has contracts with China's Sinopharm, the US companies Moderna and Pfizer and UK-based AstraZeneca.

The country of some 33 million people, which is in the middle of a third wave of infection, on Saturday recorded almost 50,000 new infections.

Chile saw a new record of daily cases with 9,284 new infections and 21 deaths in 24 hours reported for Saturday.

Mexico also reported its highest figures since the start of the pandemic, with 47 daily infections in a country of 129 million.

Brazil: Fighting the pandemic with songs

As China prepares for the Winter Olympics next month, host city Beijing is demanding that travelers get a COVID-19 test within 72 hours of arrival there, after the city reported its first local infection with the highly transmissible omicron strain.

The case involved an individual who had visited a number of shopping areas and restaurants in the previous 14 days. The new rule is effective from January 22 to the end of March.

Elsewhere, a cargo train from North Korea pulled into a Chinese border town on Sunday, according to media reports, in what's thought to be the first such crossing since anti-coronavirus border lockdowns began.

The train crossed the Yalu River railway bridge to arrive in the Chinese town of Dandong on Sunday.

North Korea has sported no COVID-19 cases since the pandemic began and has introduced strict measures against the virus. These have included the border closures and domestic travel restrictions.

In India, some 60% of the adult population of 900 million has received two doses of the coronavirus vaccine, as the country marks a year since the start of its vaccination campaign.

The nation of some 1.3 billion people started its vaccination program with the aim of covering the adult population by the end of the year.

Although that target has been missed, the government said that, so far, at least one dose had been administered to 93% of the population.

Daily infections of coronavirus in Australia have dropped below 100,000 for the first time in 5 days, amid expectations that omicron has reached its peak in the worst-hit state New South Wales.

The player said he was "extremely disappointed with  a unanimous Federal Court decision not to block his deportation. The ruling was deliver over fears he could stoke anti-vaccine sentiment.