Thailand′s king living in luxury quarantine while his country suffers | Asia | An in-depth look at news from across the continent | DW | 01.05.2020 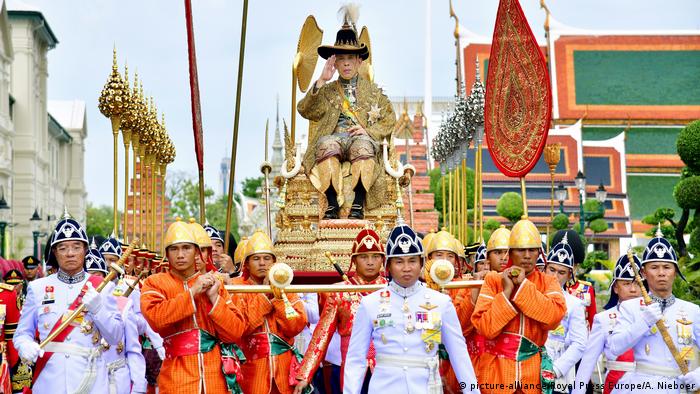 Life in Thailand has been brought to a standstill by the coronavirus pandemic. The normally bustling streets of Bangkok are deserted. Suvarnabhumi Airport, normally a hub of international tourism, is seeing a fraction of its usual traffic. Thailand's critical tourism industry, which made up 20% of the country's GDP in 2018, has ground to a halt.

During a crisis, people expect leaders to demonstrate solidarity and encouragement. But Thailand's king, Maha Vajiralongkorn, has largely been absent from his kingdom since the coronavirus pandemic began. He has been riding out the coronavirus at a luxury hotel in the Bavarian Alps.

Vajiralongkorn enjoys special permission to reside at Hotel Sonnenbichl in Garmisch-Partenkirchen. According to local authorities, the hotel is not open for normal accommodation. The king and his entourage have special permission because they are a "single, homogeneous group of people with no fluctuation."

The king is not living alone in isolation; his entourage of 100 includes a harem of at least 20 women. At the end of March, German media reported the king was jet-setting around Germany in a private Boeing 737, visiting Hanover, Leipzig and Dresden. Vajiralongkorn reportedly didn't even disembark and took off again directly after landing.

The king is known for his eccentric behavior. He officially succeeded his father to the throne in October 2016 and was crowned during a magnificent ceremony in May 2019. Rather than following in the footsteps of his father, who was revered by many Thais, Vajiralongkorn is often embroiled in scandal.

"The king's behavior during the coronavirus crisis has been a disaster for the reputation of the Thai monarchy," said journalist and activist Andrew MacGregor Marshall, adding that the king is a "troubled, sadistic and authoritarian monarch who should have no place in the 21st century."

Marshall, the author of the critical book "A Kingdom in Crisis," is allowed to say what he wants about King Vajiralongkorn. In Thailand, this kind of criticism would be severely punished under a draconian lese-majeste law, outlawing any disparaging statements or opinions about the king and the royal family.

Anyone violating the law faces up to 15 years in prison. There have been multiple cases in the past of Thais being thrown in jail for several years over posts on Facebook. Nevertheless, social media remains one of the only sources to understand how Thais, and especially the younger generation, feel about the monarchy.

Despite the risks, a tweet from exiled historian Somsak Jeamteerasakul circulated in Thai social media at the end of March, showing the king's flight path to Germany and asking in Thai: "What do we need a king for?" It was quickly shared thousands of times and was a trending topic for weeks.

And for a long time, several popular memes have circulated. A particularly biting example uses HBO's Game of Thrones: "We don't go serving some shit king who's only king because his father was."

Some users turned their criticism, which was mainly aimed at the current king, toward the institution of monarchy as a whole. A user on Facebook, for instance, wrote: "Seeing people questioning why we need a king on Twitter makes me happy but I want it to go beyond just insulting him on Twitter. I want people to read or listen to lectures about this topic and crystallize systematically why it had to exist, why it was regarded as very important and why, at the moment, it doesn't seem necessary."

Some users even went so far as to implicitly demand the abolition of the monarchy: "Honestly, I already want to have a president."

However, criticism of the king and the royal family mainly comes from the younger generation, said a Thai expert, who wishes to remain anonymous for security reasons. Thais aged over 30 still stick strongly to the monarchy even if they secretly disapprove of the present king, the expert told DW.

The Thai royal family has remained silent about controversy. But on March 22, Puttipong Punnakanta, minister for digital and social affairs, warned in a tweet that it's dangerous to post content online that endangers national security. The accompanying picture was unambiguous:

The military-backed government that took power in the aftermath of the 2014 coup protects the king, and the military and the monarchy are interdependent.

The unloved king needs the military and its government to secure his power. The military relies on the king, because it is easier to come to terms with a monarch ruling for life than with a constantly changing set of politicians and parties in a democratic system.

The unbroken power of the king

Thai expert Marshall does not believe that the growing displeasure with the king will lead to concrete steps against the monarchy because of the military's support for the king.

Vajiralongkorn has successfully pushed the kingdom towards absolute monarchy since taking office, although officially the country is still a constitutional monarchy, Marshall said.

For this purpose, the king has brought an elite unit of soldiers and policemen under his direct control. He took direct control of the assets of the royal family, formerly managed by the Crown Property Bureau (CPB). According to estimates, this amounted to $30 to $60 billion (€27.6 to €55.2 billion).

"It's clear that the king does not have the support of most Thais, but it will be very difficult to challenge his power because of his control over the military. An uprising against the monarchy would lead to mass bloodshed on the streets of Bangkok," Marshall said.

The leaders of the anti-military Future Forward party have been banned from participating in politics for 10 years after the Consitutional Court dissolved the party over a $6 million loan from the founder. (21.02.2020)

A judge has died in an apparent suicide in protest over Thailand's judicial system, which has long been criticized for alleged corruption and bias. He accused superiors of trying to interfere with verdicts. (07.03.2020)

The coronavirus has global tourism firmly in its grip. The situation is particularly dramatic in Asia. The European tourism industry is also becoming increasingly nervous. (03.03.2020)

Myanmar's COVID-19 border closure and the recent coup have driven workers to desperation. This investigation into Thailand's fishery industry was made possible by the Pulitzer Center and Democratic Voice of Burma.