Amnesty International has accused Thailand of using existing laws to target those who criticize the government for its handling of the coronavirus crisis. It said laws are used to censor "false" COVID-19 communications. 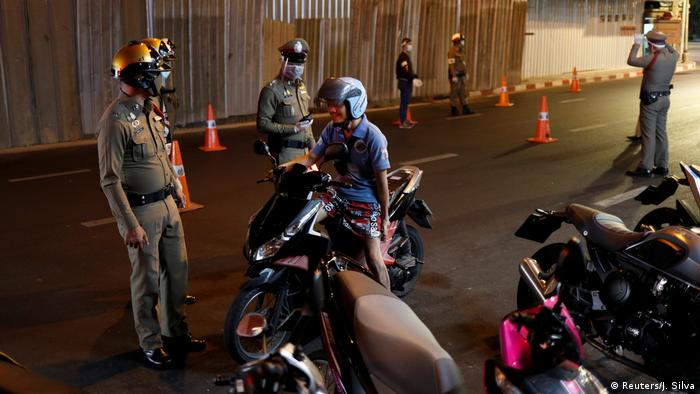 Thai authorities are prosecuting social media users who criticize the government and the monarchy "in a systematic campaign to crush dissent which is being exacerbated by new COVID-19 restrictions," Amnesty International announced on Thursday.

In a new report released on Thursday, the global human rights watch dog said Prime Minister Prayut Chan-O-Cha's administration has increased the use of "vague or overly broad laws" to criminally charge dozens of peaceful critics since being elected last year.

"Through harassment and prosecution of its online detractors, Thailand's government has created a climate of fear designed to silence those with dissenting views," said Amnesty's Senior Research Director Clare Algar.

"Repression is escalating, with authorities seemingly using the COVID-19 pandemic as a pretext to further quash criticism and unlawfully restrict human rights," she added.

Freedom of expression stifled amid lockdown

The report, titled They are always watching, included interviews with human rights defenders, activists, politicians, lawyers and academics who described how the government criminalizes the right to freedom of expression to oppress those perceived to be critical of Thai authorities.

Amnesty said that Prayut's declaration of a state emergency in March further increased the repression of freedom of expression and peaceful assembly in Thailand.

The report concluded that officials abused the coronavirus pandemic to "ramp up" targeting of 'fake news.'

Abusing COVID-19 to crack down on dissident

Prayut's administration launched a number of Anti-Fake News Centers in November last year to monitor online content that supposedly misleads citizens. However, the centers remain entirely state-run and they are yet to employ independent third parties to factcheck online content stamped as 'fake news.'

According to Amnesty's report, authorities have used existing laws to censor "false" communications related to the handling of the coronavirus outbreak and to "crack down on critical voices."

On 26 March, the government invoked the Emergency Decree on Public Administration in Emergency Situation, giving officials the power to censor or edit information they deem to be false or distorted,  with a possible penalty of up to two years in prison.

The Computer Crimes Act, which was amended in 2016, now gives authorities license to monitor and suppress online content and prosecute individuals for various broadly defined violations of the law. The wide-ranging Article 116 of the Thai Criminal Code,  provides for a penalty of up to seven years' imprisonment for acts of sedition while Articles 326 to 333 criminalize defamation, in effect empowering authorities to jail people deemed to have "impaired the reputation" of public officials.

"The Thai authorities must end the use of criminal laws against people who peacefully criticize them, and prevent further restrictions on the right to freedom of expression under the guise of responding to the COVID-19 pandemic," warned Algar.