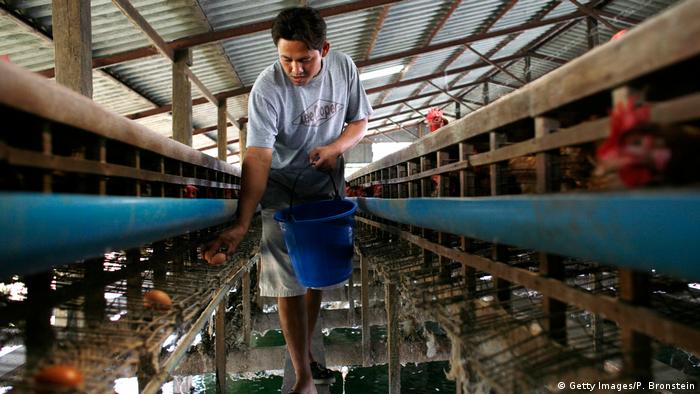 A court in central Thailand on Tuesday sentenced a reporter to two years behind bars for criminal libel for a Twitter post about exploitative working conditions at a poultry farm.

Suchanee Cloitre, who worked for Voice TV at the time of the tweet, is one of more than 20 journalists, workers and activists who have been sued by Thammakaset Co., which supplied poultry to the Thai agribusiness giant Betagro.

Suchanee had tweeted about a 2016 legal complaint about labor abuses at Thammakaset's farm filed by a group of migrant workers from neighboring Myanmar to Thailand's National Human Rights Commission.

"I'm shocked and did not think the sentence would be so harsh," Suchanee told Reuters after the sentencing, adding that she felt concerned about what would happen to her 8-month-old son.

The Lopburi provincial court released Suchanee on a 75,000-baht (€2,200/$2,500) bail after the sentence. Her lawyer, Woraporn Uthairangsee, said Suchanee would appeal the verdict, according to the Associated Press.

"I was doing my duty as a journalist in reporting what has happened, I didn't intend to harm anyone," Suchanee told AP. "I think the verdict will have an effect on the Thai press. They have to be much more careful when reporting any story."

In 2016, workers at Thammakaset reported that they had been forced to work up to 20 hours a day without a day off for 40 or more days in a row. They also said that they had received less than the minimum wage and were not given overtime compensation.

In addition, the workers said Thammakaset had confiscated their identity documents in order to restrict their movement.

Thammakaset sued the workers for defamation, with management saying their complaint to the Human Rights Commission had damaged the interests of the company.

Later, the poultry farm also sued a labor activist and two workers after they took their time cards to use as evidence in their complaint of labor law violations.

Thammakaset lost both cases. In August 2016, Thailand's Department of Labor Protection and Welfare ordered the poultry farm to pay the workers a total of 1.7 million baht in compensation and damages. Thammakaset made the payments this year.

The journalist had tweeted about the ruling. In the aftermath of the decision, Thammakaset launched a series of lawsuits.

In October, Thammakaset filed a lawsuit accusing Angkhana Neelapaijit, a former member of the Human Rights Commission, of criminal libel. The chicken farm claimed that Neelapaijit had defamed the company with two Twitter posts showing her support for activists also facing lawsuits by Thammakaset.

If found guilty, Neelapaijit could face up to three years in jail.

According to Human Rights Watch, such defamation cases are intended to distract from lawsuits filed in the public interest by environmentalists, human rights defenders and other groups. Critics say such tactics are meant to intimidate, as individuals and small groups have limited budgets compared with the stronger finances and legal resources of corporations.

As migrants try to avoid new penalties for being in Thailand illegally, reports suggest they're being fleeced at the border. Tens of thousands of foreign workers have fled the country in recent days. (05.07.2017)

Protesters in Bangkok broke through a barricade of shipping containers near the royal palace while calling for reforms to the monarchy.