Thai fishing industry makes headway, but challenges remain | Asia | An in-depth look at news from across the continent | DW | 13.11.2019 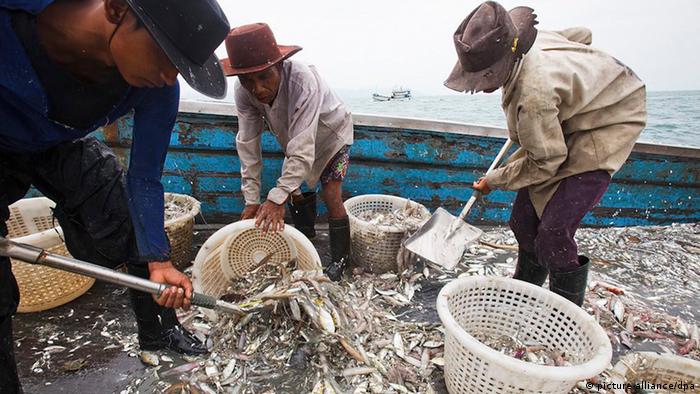 In October, the Office of the US Trade Representative (USTR) announced the suspension of preferential trade policies for Thailand under the Generalized System of Preferences (GSP), which will affect over 500 products, including all of those related to the Thai seafood industry.

The reason cited for the removal, which will take effect on April 25 next year, was Thailand's failure to adequately safeguard workers' rights.

Some have cast doubts over the measure's true motives, suggesting there are political influences involved, but reports in recent months over the poor state of working conditions have shown that the move was not entirely unfounded.

Lured by the promise of good wages by a broker, 18 fishing crew members set off from Thailand for Iran earlier this year. Everything was smooth sailing until they entered Somali waters when the flag was switched to that of the eastern African nation. The fishermen found themselves trapped as they were not allowed to leave the vessel and had their wages withheld. Their fortunes took a turn for the worse when the ship was running low on fuel and food supplies.

Reports of their being stranded on the fishing trawler under exploitative, slave-like conditions in the seas off Somalia surfaced in the media in August, uncovering underhand practices in the sector.

''Thailand has amended and enforced its laws, but these are trans-boundary crimes. Fishing vessels may not use a Thai flag if there is stringent law enforcement," Thai human rights activist Patima Tungpuchayakul told DW. She underlined that forced labor and exploitation may not be detected on Thai vessels operating in Thai waters, but on those flying foreign flags.

Thai authorities tend to be unaware of the existence of these hidden fishing businesses as they are registered overseas, meaning there is no domestic paper trail and officials might be ignorant of the labor conditions on board these vessels.

Over the last five years, Thailand has been heavily criticized following reports of human and labor rights abuses, as well as illegal, unreported and unregulated (IUU) fishing practices.

In 2014, the US State Department downgraded the country to Tier 3, the lowest rating possible, in the Trafficking in Persons Report, while the European Commission issued a yellow card, threatening to ban Thailand from exporting seafood products to the European Union.

The formal warnings served as a wake-up call for Thailand to overhaul its lucrative fishing sector. Measures adopted include amendments to its Fisheries Law, mandatory installation of vessel monitoring systems, establishment of port-in-port-out centers and increased fines for violations.

Proof of the nation's progress came when Thailand was upgraded to Tier 2 in 2018 and the yellow-card status was lifted in January this year. In the same month, it demonstrated "crucial regional leadership" by becoming the first country in Asia to ratify the Work in Fishing Convention, which ensures that fishermen have adequate working and living conditions, Environmental Justice Foundation (EJF) executive director Steve Trent told DW.

While human rights campaigners say Thailand should be appreciated for its significant progress, they do express some reservations on the implementation of these ratifications in the nation's legal framework.

Apart from the overseas-registered vessels that spurn fisheries legislation, the Southeast Asian country's efforts at improving its labor conditions have also been hamstrung by lax inspection and enforcement.

"There is no doubt that Thailand has taken its foot off the pedal when it comes to vigorous enforcement of laws on the fishing fleets," Phil Robertson, deputy director of Human Rights Watch, told DW. He also highlighted that police and other officials lack basic training to enforce the national anti-human trafficking law effectively.

"The Thai fishing industry remains desperate to get enough fishermen to come on board the boats so they continue to use many tricks to keep those they have," said Robertson.

Efforts to stamp out wage withholding and deductions for recruitment fees have proven elusive. The requirement for employees to switch to electronic wage payment gives vessel owners and captains leeway to withhold the fishers' ATM cards and PIN numbers, according to Thai activist Tungpuchayakul.

The EJF corroborated this information and listed insufficient access to electronic payment methods and retention of documents as further examples of continued labor exploitation. It is also worth noting that at present migrant workers in Thailand are not allowed to form or join labor unions.

In Southeast Asia, unreported and unregulated fishing remains commonplace. The 2019 IUU Fishing Index, created by the Global Initiative Against Transnational Organized Crime, disclosed that Asia fared worst among all regions, with Cambodia, Vietnam, Myanmar, the Philippines and Indonesia among top 15 worst-performing countries. The practice is reflected in the Asia Foundation's findings that overfishing has put 64% of Southeast Asia's total fisheries "at a medium to high risk." 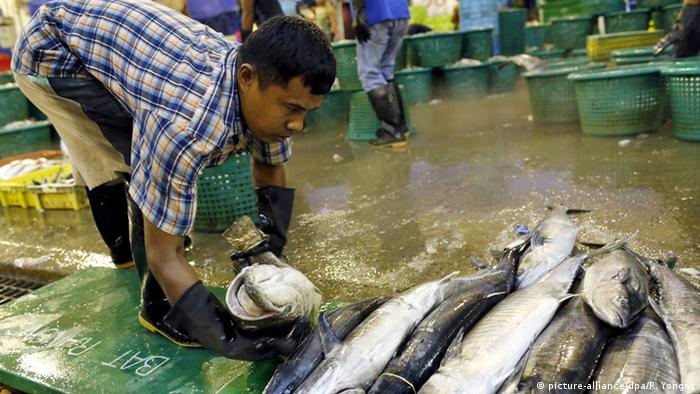 Cambodia is one of the only three nations in the world with the red card status, which temporarily prevents the country from exporting seafood products to the European Union. Its neighbor, Vietnam, has been threatened with the same trade ban due to their "far-flung and out-of-control" fishing vessels, said Robertson. Persistent illegal fishing activities in other countries' territories prompted the European Commission to hand the yellow card warning to Vietnam.

The Philippines also suffers from IUU fishing — the practice leads to economic losses of more than €1.18 billion ($1.3 billion) annually, according to the US Agency for International Development (USAID). Until 2014, it cost Indonesia, the world's second-largest fishing country, approximately €3.4 billion each year.

Researchers have observed significant decline in fish populations worldwide. In a 2018 report, the FAO estimated that 33.1% of fisheries are fished to capacity or beyond. Meanwhile, global consumption has increased steadily, climbing from slightly under 10 kilograms in the 1960s to a record-high 20.3 kilograms in 2016.

With demand at an all-time high, depleting stocks due to overzealous fishing force fishermen further out and increase their length of time at sea which, in turn, raises operating costs. This contributes to forced labor, human trafficking and other human rights abuses as unscrupulous owners try to keep up with demand.

"Fuel costs are unavoidable, but labor costs can be modified and distorted. Fishing operations are highly labor intensive, with fishers' wages accounting for up to 60% of operating costs," according to EJF's latest report, titled Blood and Water.

Tungpuchayakul, who has dedicated her life to helping enslaved men at sea, hopes that people focus not only on fish stocks and environmental issues, but also on the laborers' working and living conditions.

Raising concerns over these practices could go a long way toward eliminating slavery-tainted seafood products. The EJF urges consumers to demand "net-to-plate traceability" and capitalize on their own purchasing power to propel change.

"I want everyone to realize that modern-day slavery exists, and it is the responsibility of every seafood consumer on this planet," said Tungpuchayakul.