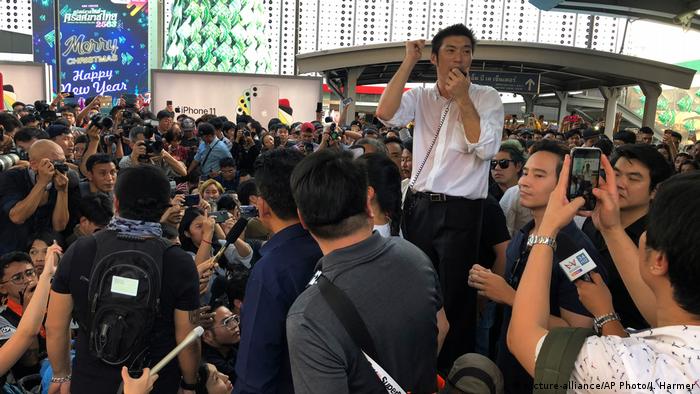 Thailand's Constitutional Court on Friday dissolved the opposition Future Forward party (FFP) and banned 16 of its leaders from politics for 10 years.

The court ruled that the pro-democracy, anti-military party had broken electoral law by taking an illegal 191.2 million baht ($6 million, €5.5 million) loan from its founder, 41-year-old Thanathorn Juangroongruangkit, a billionaire who garnered millions of young supporters with his alternative platform.

Future Forward was a surprise force in Thailand's 2019 general election, coming in third. It currently holds 76 seats in Thailand's House of Representatives. "The sentiments that led people to vote for the party last March have been cast as illegitimate in the eyes of the very powerful forces in Thailand," Michael Montesano, coordinator of the Thailand Studies Program at the ISEAS-Yusof Isak Institute in Singapore told DW.

"I am sad and disagree with the court," said prominent anti-democracy activist Ekachai Hongkangwan, who has faced multiple attacks for his vocal campaigning against the ruling military government. "Every party takes out loans, but they keep it a secret. Why does the FFP have to make it public?"

The party has been seen as an interloper by Thailand's government and conservatives, due to its reformist positions and popularity. FFP garnered support by vying for a "desirable, new path for Thailand," said Montesano.

However, the party and its founder have been mired in a number of lawsuits since it was established in March 2018, a year prior to the last vote in Thailand.

"The dissolution of Future Forward by the Constitutional Court is essentially the way that the political order set up by the current constitution is supposed to work," said Montesano. "Which is that the ruling order can push out its enemies by superficially legal means."

In January this year, the party had been acquitted of attempting to overthrow the monarchy. Last year, Thanathorn was suspended from parliament following a court ruling that he had breached election law, after he was accused of holding shares in a media company when he registered as a candidate.

Regarding today's case, the party said it had been open about the loan it took from Thanathorn, and its secretary-general Piyabutr Saengkanokkul said the party chose to take a loan from its leader rather than raise funds by what he called questionable methods.

"If we could turn back time … we would do the same thing because it was transparent and verifiable,” Thanathorn wrote in a Facebook post this week." The loan, which was issued at a relatively low interest rate, was classified as a benefit instead of a loan.

"This prolongs the history of the Constitutional Court in acting to defend the ruling entities rather than being seen as a neutral body that calls things as it sees them," said Montesano.

Thai Twitter users condemned the dissolution with the hashtag #SaveFutureForward. One user wrote "Another sad day for Thailand - land of injustice."

Another user retweeted photos of banners posted at Thammasat University in Bangkok that said "There is no justice in this country."

The EU's foreign ministry also called the dissolution of the party a "setback for political pluralism in Thailand."

"Political space in Thailand should remain open," read the statement.

What's next for Future Forward supporters?

The party's supporters are now left to decide how to move forward. Some of the suggested possibilities include the formation of a new opposition party, while others believe that there is a possibility of protests.

Although Thanathorn has been banned from politics, "he certainly has not lost the right to organize protests," said Montesano. "We haven't seen large protests on the streets of Thailand for a long time, and that is coupled with the distaste in the palace for protests and the determination of the military to enforce that distaste." However, Montesano is skeptical that those protests will take place.

Ekachai echoed that skepticism, saying "There may be a flash mob or little protests. I believe most of the supporters will be sad and angry, but they will only cry and do nothing."

There are also questions over the possibility of forming an effective replacement for the party, without both the charisma and financial backing of Thanathorn. "I'm extremely skeptical of what these imitators will be able to do," said Montesano. "The executive committee of Future Forward, which would want to be involved [in the creation of a new opposition party] does not have political rights for another decade."

The party has been the primary opposition to Thailand's ruling military-aligned government, which has maintained power since a 2014 coup.

Prime Minister Prayut Chan-o-cha led the 2014 coup and kept his seat after the election, which was held under new laws that his military-government introduced. The Constitutional Court has regularly ruled in favor of the ruling party.