Coronavirus digest: Austria to 'tighten the screws' on unvaccinated

Austria is set to impose a lockdown on unvaccinated people in the coming days to curb a surge in infections. Meanwhile, the Netherlands has introduced a new partial lockdown for three weeks. Follow DW for the latest. 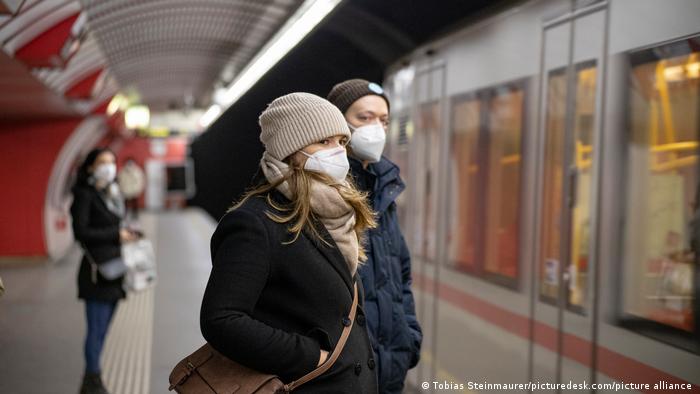 A lockdown for unvaccinated people is expected imminently in Austria as the country fights a fierce wave of the coronavirus pandemic.

Chancellor Alexander Schallenberg on Friday announced that a green light for the measure was set to be given by his government after consultations on Sunday.

Due to the steeply rising infection figures, he said, it was no longer reasonable to wait any longer. "We will take this step now," said Schallenberg.

Those without the vaccination are expected to only be allowed to leave their homes for essential purposes, to work, or if they need help.

"We have to tighten the screws again," Schallenberg said. He added that the lockdown would be controlled with spot checks.

The conservative politician justified the restrictions by saying those who were vaccinated could not be expected to go into another lockdown for those who were hesitant or opposed to the vaccine.

Since Monday in Austria, only vaccinated people and those who have recovered from COVID-19 can go to restaurants, visit tourist attractions, and attend events.

Proof of vaccination or recovery or a negative test is now also regularly required at workplaces.

Although the two measures have led to a strong increase in the number of first vaccinations in recent days, the number of infections has continued to rise sharply.

On Friday, authorities reported there were almost 11,800 new infections within 24 hours.

Neighboring Germany on Friday declared Austria a high-risk area, meaning that people arriving from there to Germany who have not been vaccinated would have to go into quarantine.

The government has ordered restaurants and shops to close early and barred spectators from major sporting events in an effort to curb a surge in COVID-19 cases.

It is also recommended that there should be no more than four vistors in individual homes.

As well as putting Austria on its travel warning list, Germany on Friday also declared the Czech Republic and Hungary "high-risk areas,'' but removed the United States.

Meanwhile, Germany recorded 48,640 new cases and 191 more COVID-related deaths as the country struggles with a new rise in numbers.

This was the second-highest value since the beginning of the pandemic, after a record-setting 50,196 new cases on Thursday.

Chancellor Angela Merkel said the unvaccinated have a duty  toward society to get the jab.

"You have the right to get vaccinated. But, to a certain extent, you also, as a member of society, have the duty to be vaccinated to protect yourself and to protect others," she said at the Asia-Pacific Economic Forum.

Germany's disease control center, the Robert Koch Institute (RKI) asked people to reduce their social contacts, and avoid or cancel large gatherings. The incidence rate has climbed to 263.7 new cases per 100,000 residents, up from 249.1 the previous day.

A coronavirus health pass will be required at bars, restaurants, cafes and nightclubs, as well as large events in Denmark starting Friday.

The digital pass provides proof of COVID vaccination, recovery from the virus or a negative test.

According to Employment Minister Mattias Tesfaye, companies will be able to demand such proof from their employees.

While a number of European countries are in the midst of their fourth waves, Denmark is heading into its third.

Authorities in Russia are preparing new restrictions, as the number of cases keep on increasing.

The state coronavirus task force wants to expand the system of QR codes, already used in many regions to restrict access to certain public places, to include public transport, cafes and shops.

People will have to provide proof of vaccination, recovery, or negative tests no older than 72 hours in order to access these locations.

While the rest of the country is also battling a surge in cases, Dalian reported 52 locally transmitted infections with confirmed symptoms on Thursday, with a daily count higher than any other Chinese city.

With an increasing number of seriously ill COVID patients in South Korea, the government has warned that it might be difficult to implement the next stage of the "gradual return to normality" in December as planned.

The increase in serious cases comes at with new recorded infections above the 2,000 mark for several days running.

According to the authorities, about half of the new infections in the past two weeks were from people who contracted Covid-19 despite being vaccinated.
Prime Minister Fumio Kishida announced plans to add hospital beds and medical resources in Japan to prepare for a possible rise in cases during the winter.

After a fifth wave that overwhelmed medical systems during summer, cases have dropped as vaccinations now cover more than 70% of the population. While restrictions have been lifted across the country, some experts believe cases will rebound as they did last winter.

Thailand has delayed the reopening of pubs, bars, karaoke joints and other nightlife venues to January 15. Industry members had asked for an early reopening, but authorities are concerned about proper ventilation and the lack of safety measures.

"We will allow the businesses to reopen, but we might start testing in some areas first," said a spokesperson for the Center for COVID-19 Situation Administration.

Colorado governor Jared Polis said all residents above 18 can get COVID booster shots, as the state is seeing a rise in infections.

US starts vaccination of younger children

Polis defied an order by the US Food and Drug Administration (FDA), which allows booster shots only for adults who are at high risk of exposure to the virus. "Because disease spread is so significant across Colorado, all Coloradans who are 18 years of age and older are at high risk and qualify for a booster shot," he said.