The ex-foreign minister has become the new head of government of the world's third-largest economy. He has vowed sweeping new measures to combat the spread of COVID-19 and address the economic hardship it has wrought. 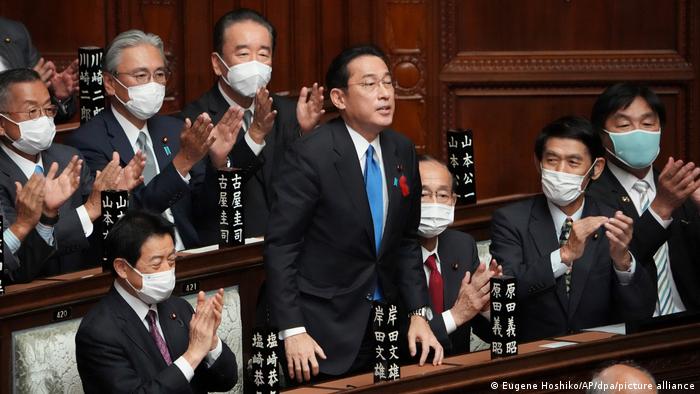 Kishida, who will become Japan's 100th prime minister since the country adopted a cabinet system in 1885, succeeds Yoshihide Suga, who did not run for reelection as Liberal Democratic Party (LDP) leader.

He is set to dissolve parliament next week and call an election for October 31, according to public broadcaster NHK.

What did Kishida say?

In his first speech to parliament as leader, Kishida confirmed that there would be a general election on October 31, as "we need to ask the public if I am fit to run the country."

US President Joseph Biden, who has made it the cornerstone of his foreign policy to confront rising Chinese power in the Pacific, was amongst the first to congratulate Kishida.

"The US-Japan Alliance is the cornerstone of peace, security, and prosperity in the Indo-Pacific and the world, and I look forward to working closely with Prime Minister Kishida to strengthen our cooperation in the months and years ahead," Biden said in a statement.

In his speech, Kishida also stressed the importance of relations with the United States. He went on to promise to fight the economic hardships wrought by the pandemic with "drastic" measures, as well as combating the spread of COVID-19 by ramping up testing and vaccination programs as most parts of Japan rollback their restrictions.

The ex-diplomat then promised to promote science and innovation, and to lead the fight to rid the world of nuclear weapons — including meeting North Korean leader Kim Jong Un "without any preconditions," if the situation arose.

Kishida also mentioned the need for broader diversity in society. Japan has one of the strictest immigration systems in the world and has been experiencing a rising tide of ethno-nationalism in recent decades.

What is expected of Kishida?

One of the key roles for Japan's incoming prime minister will be boosting the economy after the coronavirus pandemic.

He also wants to put together a massive stimulus package worth about 30 trillion yen (€231 billion, $269 billion) by the end of the year to help Japanese businesses hit by the economic damage wrought by the pandemic. In his speech on Monday, he said the government was considering cash payouts to the hardest hit.

He promised a shift away from the neoliberalism of the past two decades and announced a "new Japanese capitalism."

He also plans to put in place measures to boost people's incomes by making changes to tax laws, and for new safeguards protecting small- and medium.sized businesses.

Who will be in the next cabinet?

Top posts in the incoming government are going to either to allies of former conservative Prime Minister Abe or Taro Aso, the outgoing finance minister.

Aso was replaced by his brother-in-law, Shunichi Suzuki.

Akira Amari, an Abe confidant, is the newly-appointed LDP secretary-general.

Takayuki Kobayashi, an ally of Amari, is tapped to head the new post of economic security.

A total of 13 of the 20 positions will be filled by those with no prior experience of cabinet posts, in line with Kishida's pledge to give chances to new people ahead of the upcoming general election.

Japan's new prime minister and the long shadow of Abenomics

New Prime Minister Fumio Kishida faces many economic challenges, not least the impact of the pandemic. However, major policy changes are not expected, at least in the short term.

Japan's Prime Minister Yoshihide Suga is facing competition within his party as he struggles with crumbling approval rates ahead of a general election.