At Munich's central Marienmarkt square, the well-known melody of a popular Bavarian folk song rings out. Tourists reach out with their cellphones in the crisp and clear November air to capture the famous glockenspiel atop the Bavarian capital's ornate New Town Hall.

Matheus Couto is among those trying to get a good shot. The 29-year-old Brazilian is a postgraduate student in the central city of Göttingen. "I spent five hours on the train getting here," he tells DW. "And I really would have loved to see Munich's wonderful Christkindlmarkt."

Unfortunately, Couto will have to come back another time. This year, the traditional Christmas market has been called off because of the coronavirus pandemic. All that remains are the wooden market stands, shuttered and waiting to be taken away for happier times. Some are still decorated with crimson Christmas balls or lonely fir branches. In normal times, as many as 3 million people would flock to the market in the buildup to Christmas, buying presents and warming their hands on delicious mulled wine.

"You wonder why they didn't cordon off one area for people who can prove that they've been fully vaccinated," says Couto. But it's not going to happen. Not in Munich, nor in other Bavarian cities including Nuremberg, which also boasts its own famed Christkindlmarkt, which normally draws visitors from as far away as Japan.

Seasonal workers fear for their livelihoods

At the moment, Bavaria and neighboring Saxony are the German states worst affected by the ongoing COVID-19 pandemic. Infection rates in some areas have gone through the roof, leading to fresh lockdowns.

"We've come to the conclusion that there will simply be too much person-to-person contact no matter how you try to control it," said Markus Söder, Bavaria's state premier, following last week's announcement of the closures. Söder said with clubs and bars also closed down, even more people would join the crowds gathering at the Christmas markets. "We're really sorry. Especially for those who run the stands."

The figurines of angels, stars and little trees are usually the main attractions at Christian Schöttl's stand at Munich's Christkindlmarkt. But not this time. He tells DW how he'd only just begun getting the stand up and ready when it was time to take it down again. 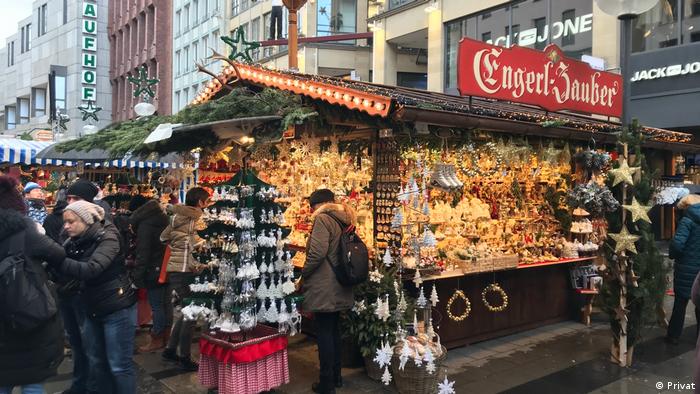 "When the cancellation order came through, we were all standing there together at the market square, hoping and praying," he says. "And even some of the guys who operate our heavy-lifting vehicles had tears in their eyes. After all, most of them don't have the faintest idea how they're going to support their families."

Schöttl comes from a family with a long history of working the Christmas market stands. "My grandmother used to say: 'Always put something aside!'" he says. "And I have to say, this time things are getting very tight. Very tight indeed."

There's not much online demand for Christmas decorations, he says. "It's a very different feeling when you buy these things at a Christmas market, where the stands are glittering and you can smell the mulled wine." When the Christmas market was first canceled in 2020, Schöttl tried his luck on the internet. His total sales were €1,100 (around $1,200).

Now he wonders how he's going to survive. "Because you also have to assume that there won't be an Oktoberfest next year, either. And maybe there will be other new variants of the coronavirus. So, when are we going to see money coming in? We're really scared," he says.

While Christmas markets are being canceled in some parts of Germany, the holiday events will continue other places, albeit with entrance restrictions: There will be strict controls on who is allowed to enter the markets. Access will generally only be allowed under "2G" conditions ("geimpft"oder "genesen" — vaccinated or recovered), meaning that all adult attendees must show proof of full vaccination or recovery from a COVID-19 infection.

The western city of Aachen, for example, lies close to Germany's borders with the Netherlands and Belgium, and it also attracts visitors from abroad. Here, it quickly becomes clear why any controlled entrance procedures would be almost impossible to enforce. For a start, there are no fewer than 115 wooden stands spread out across Aachen's large historic city center. They are accessible from all sides and attract up to 1.5 million visitors in a normal year. 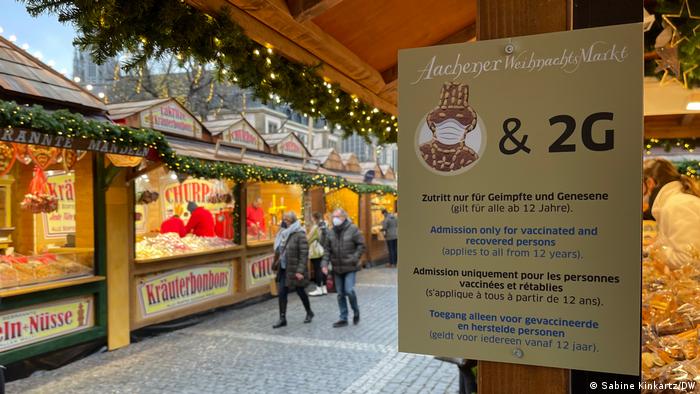 Announcing vaccination or recovery requirements is easy — enforcement is another matter

The 2G restrictions apply in Aachen's Christmas market, but because the market is not held in one place with entrance gates, and because there are several exceptions (notably for children and teens), authorities can only carry out random spot checks. Police and other security staff can patrol the areas between the stands, but the organizers' goal is to retain as much of the traditional feeling as possible. Visitors will still be able to stroll freely from stand to stand, amid the sweet scent of mulled wine, cinnamon and roasted almonds.

But in the restaurant area, where people can sit down at tables and eat together, things will be much stricter. Here, visitors will have to show their ID and proof of vaccination or recovery. "They will then get a white wristband that permits them to enter all of the market's restaurant zones," says one of the security staff. "But I'm not allowed to help them to put it on," he adds, before turning to another visitor. The security people also won't be checking whether the wristbands have perhaps been passed on to others who might not be vaccinated. 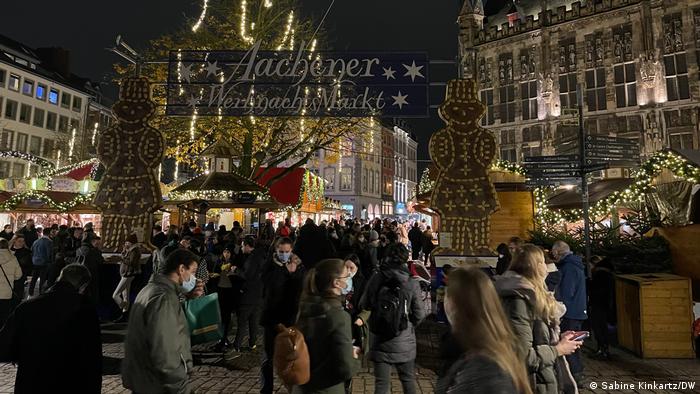 "Do I have to put my mask back on now?" one woman asks her husband after they finish eating their bratwursts. Neither is sure, and signs clarifying the regulations are not easily visible.

The original signs were printed in German, English, French and Dutch to ensure clarity and compliance. But almost as soon as they went up, they were out of date because the Aachen city authorities decided to ease restrictions on people under the age of 18, meaning that all the signage had to be updated and reprinted. 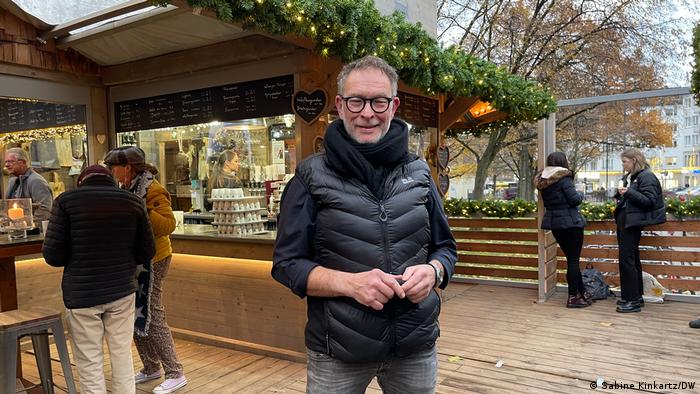 At Gerrards' chalet-style restaurant in Aachen's market, there's space during day. At night, it's packed

Is the raft of regulations going to work? "Most of the people who run the stands are worried that they're not going to stay open until Christmas Eve," says Rolf Gerrards, a restaurateur who runs Hütte 16, a large and very popular chalet-style eatery among the market stalls. "The infection rates are going up and up," he adds, with more than a hint of anxiety.

In normal years, Hütte 16 can cater to just over 170 people, with three times that many also trying to get to the stand itself, where the main attractions are marinated meat goulash and, of course, mulled wine. This season, customers can only get to the stand after waiting in a long line. It appears many are already trying to enjoy the Yuletide atmosphere while they can — because it may not last.

Will German Christmas markets be canceled?

Back at Munich's Marienplatz, the bells of the famous glockenspiel are chiming. High up on the bell tower, figurines of journeymen in red jackets and green caps can be seen performing the Schäfflertanz, a traditional Bavarian dance. Legend has it that the dance originated with festively dressed local coopers who danced in the streets to bring life back to the city after it was decimated by the plague in the 16th century.

Meanwhile, away from the now-redundant market stands, a long line has formed — several dozen people are trying to get into the vaccination center located within the Town Hall complex. Erika Aigner, 82, said she had been waiting for two hours.

"I got my second vaccination in March," she says. "So that's eight months ago. And it's time for a refresher. But my GP couldn't give me an appointment until the beginning of December."

It was going to be another hour before her turn, she says. And, with infection rates skyrocketing, she says the decision to cancel the Christmas market comes as no surprise. "But what I don't understand are all these people refusing to be vaccinated. There comes a time when enough is enough."

The public broadly supports one. Some officials are calling for one. But a general COVID vaccine mandate remains a difficult sell in Germany.