More than 65,000 new infections were registered across the country in the last 24 hours. Health officials warn the country is facing a "very bad Christmas." 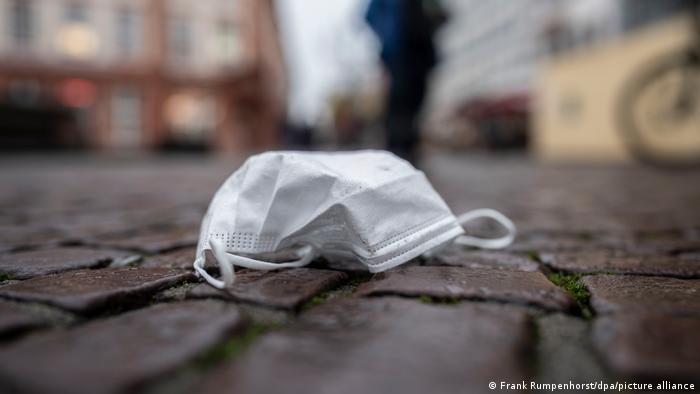 Authorities have warned that the latest numbers may be an undercount

Germany broke its own record again on Thursday as it registered 65,000 new coronavirus infections in 24 hours. This is the first time since the pandemic began that the number has been upward of 60,000 in a single day.

At the same time, the head of the country's infectious disease agency the Robert Koch Institute (RKI), Lothar Wieler, warned that number could in fact be much higher.

What did the RKI head say about COVID in Germany?

Wieler said he believes there were "twice or three times as many" cases a day than were actually being reported.

"The under-reporting of the true numbers is increasing," Wieler said during an online discussion with Michael Kretschmer, the state premier of Saxony, which is now the epicenter of the pandemic in Germany.

"We are in an emergency. Whoever refuses to see that is making a big mistake."

Why is Europe COVID-19's epicenter again?

Drawing a grim forecast for the coming days, Wieler urged political leaders to take quick action to curb new infections. "We will really have a very bad Christmas if we don't take countermeasures now," he warned.

He also expressed disappointment with the pace of COVID policy. "It's simply no longer bearable that what I, and many other colleagues, have been saying for 21 months is perhaps still not being recognized."

The health official called for contact restrictions, closure of clubs and bars, and the introduction of "2G" rules nationwide — referring to the shorthand in Germany for a rule that allows freedoms like access to restaurants and hotels only to those who are vaccinated or have recovered from COVID.

Merkel to meet with state premiers

Wieler's words came as Chancellor Angela Merkel was preparing to meet with all 16 state premiers on Thursday to discuss implementing nationwide measures in an attempt to avoid the uneven restrictions that have been implemented by state and municipal governments throughout the country.

Germany's state of emergency, which has given the federal government tighter control over public health issues, is set to lapse on November 25.

The likely future ruling coalition of the center-left Social Democrats (SPD), environmentalist Green party, and neoliberal Free Democrats (FDP), had indicated that they would let it expire, despite pleas from state premiers not to do so.

"If we're really going to be successful in breaking this wave, we're not going to be able to do it by just addressing the unvaccinated group," Kretschmer said ahead of the meeting.

The German parliament also convened on Thursday morning to vote on a set of measures proposed by the SPD, Greens and FDP.

Among other things, they want proof of vaccination, COVID-19 recovery, or a recent negative test to be shown on public transport, and to introduce strict penalties of up to five years in prison for forgers of coronavirus documents.

Germany's vaccination rate has stagnated at under 70% in recent weeks, a relatively lower vaccine take-up compared to other parts of Western Europe.

Calls have been growing louder for more people to get the jab and for the government to impose stringent restrictions on the unvaccinated to persuade them to receive the shots.

Chancellor Merkel made a new plea on Wednesday for the unvaccinated to get the shots, saying "when enough people are vaccinated, that is the way out of the pandemic."

Meanwhile, the latest COVID wave has put hospitals in parts of Germany under immense strain.

While the number of COVID patients in intensive care is increasing, hospitals are struggling to cope because of not only rising demand but also a shortage of trained personnel.

Long hours, low pay and stress during the pandemic have served to put people off a job in the healthcare sector.