COVID: Germany introduces new measures to curb the pandemic | Germany | News and in-depth reporting from Berlin and beyond | DW | 18.11.2021

Acting Chancellor Angela Merkel and the country's 16 state premiers on Thursday agreed on several measures to curb the pandemic. The leaders stressed the necessity of vaccinations for all employees of hospitals and nursing homes.

They also agreed on the introduction of "2G" restrictions for the unvaccinated in those regions where a certain hospitalization rate is exceeded. "2G" refers to a system only allowing free movement for leisure activities for the geimpft oder genesen — "vaccinated or recovered."

"It is absolutely time to act," Merkel said, speaking of the "very worrying" situation.

"We know we could be better off," the chancellor stressed, "if the vaccination gap wasn't so big."

Germany's vaccination quota stands at only around 68% and is even lower in the country's eastern and southern regions, where infection and hospitalization rates have reached record highs.

The so-called hospitalization incidence has become the new benchmark for introducing tougher regulations in Germany: If more than three per 100,000 inhabitants in a region are hospitalized with COVID, the 2G rule will apply for all public leisure activities in a given state. A value of six per 100,000 will require people to show an additional negative COVID test ("2G+"). From a value of nine, further measures such as contact restrictions are to be implemented.

In response to the soaring numbers, the states of Saxony and Bavaria already imposed 2G restrictions earlier this month.

On Thursday, more than 65,000 new infections were registered across the country in 24 hours. Health officials are warning that the number is likely to at least double.

Earlier on Thursday, the federal parliament voted on a set of measures proposed by the parties likely to make up the next federal government. [The new law was approved a day later by the upper house and will therefore take effect, Eds.]

The decision to amend the Infection Protection Act goes hand in hand with the decision not to extend the "epidemic situation of national concern" after it expires on November 25. This was introduced in March 2020 as the legal basis for Germany's federal government to be able to take nationwide action, such as imposing travel restrictions.

The new legislation includes mandatory daily testing for employees and visitors of care homes, regardless of whether they have been vaccinated or not.

They also include "3G" rules (vaccinated, recovered, or tested") requiring people to show proof of full vaccination or recovery or a valid negative COVID test for workplaces and on public transport. Work from home rules would also be reinstated.

Free testing is here to stay

Rapid antigen tests will remain free of charge for everyone.

Germany's 16 states will be also able to retain and introduce protective measures. This includes restricting or prohibiting recreational, cultural, and sporting events, banning entry to healthcare facilities and the sale and public consumption of alcohol, and closing universities.

Measures will not include school closures, blanket travel restrictions, or mandatory vaccination. The new legislation includes the introduction of strict penalties of up to five years in prison for forgers of coronavirus documents and certificates. The forging of vaccine passports has become a large problem in Germany, according to police who say such fake documents can be sold for up to €400 ($452).

Pushing the new legislation through parliament was seen as a first major test for the coalition of the center-left Social Democrats (SPD), Green Party, and the neoliberal Free Democrats (FDP), who are set to replace Angela Merkel's "grand coalition" government of center-right Christian Democrats (CDU/CSU) and SPD.

During the heated debate in the Bundestag, Germany's federal parliament, the SPD's Sabine Dittmar laid the blame for the current situation at the door of the outgoing CDU-led government, which she said had failed to curb infections by effectively promoting vaccination. "My urgent call is — vaccinate, vaccinate, vaccinate!" she said.

But the CDU has launched into opposition mode, demanding that the emergency provisions that have shaped so much of the pandemic response in Germany be extended.

"Case numbers are going up — and you are reducing restrictions. That is a mistake," he said, addressing the prospective coalition parties. "All this means — you do not have a plan for the pandemic."

FDP parliamentarian Marco Buschmann insisted that extending the special regulations beyond November 25 would only make sense if the government wanted to implement blanket business closures or lockdowns, including school closures. His party, Buschmann insisted, vehemently opposes such measures.

Tino Chrupalla, chairman of the far-right populist Alternative for Germany (AfD), expressed skepticism about how much vaccines have helped. His party is home to a substantial number of vaccine skeptics and coronavirus deniers. The AfD described many of Germany's lockdown restrictions in its 2021 election manifesto as "disproportionate," saying that many should be scrapped. It has also challenged several of them in court.

A number of the AfD members of parliament are currently unable to sit in the main plenary hall of the Bundestag, as they refuse to ascribe to 3G rules — they refuse to show documentation of vaccinations or recovery and will not allow themselves to be tested.

"We are ending the current framework and implementing a new and legal framework to implement very effective measures," Green Party MP Johannes Wagner told DW after the debate.

Wagner added, "I am for a mandatory vaccination for certain groups, not for the whole population," such as for "people who work in the hospitals." 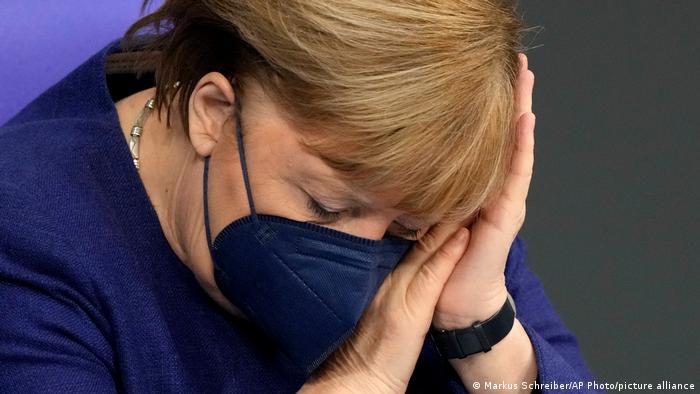 Angela Merkel during the debate

Karl Lauterbach, a physician and a parliamentarian for the SPD, accused Angela Merkel's outgoing administration of failing to act quickly to prevent COVID-19 infection numbers from soaring.

"I think that the pandemic fourth wave was underestimated. Some scientists were not really giving an alert, others were. There was a lot of wishful thinking in our government," he told DW after the session.

A professor in health economics and epidemiology, Lauterbach insisted that new rules proposed by the likely incoming SPD, Green Party and FDP government were enough to stop the spread of infection.

On whether the new measures can convince more people to be vaccinated: "I do think that at least part of these people can be convinced and will be convinced."

Lothar Wieler, head of Germany's Robert Koch Institute (RKI), cast doubt on Thursday over the latest infection figures. He pointed to the well-known problem that real case numbers may be much higher due to a lag in reporting. The disease control agency chief called for quick and efficient action.

"The health system in some states can no longer cope with the situation," he said. "And the projections are bleak, really bleak. There is an emergency in our country, and anyone who cannot see it is making a big mistake."

More than 65,000 new infections were registered across the country in 24 hours. Health officials are warning that the number is likely to at least double.

Here is the link to the dashboard from Germany's RKI health authority, showing COVID infection numbers in Germany.

Hamburg has introduced tougher restrictions and Munich's Christkindlmarkt has been ditched altogether. Meanwhile, Germany has recorded its highest ever daily caseload. Follow DW for the latest.

German lawmakers are mulling new measures to curb the surge in infections. Meanwhile, Israel has greenlit vaccinations for children between five and 11. DW has the latest.