Germany's Oktoberfest canceled again in 2021 due to coronavirus

Germany's annual Oktoberfest will be canceled for a second year in a row due to the coronavirus pandemic. Bavarian Premier Markus Söder said the decision was made with a "heavy heart." 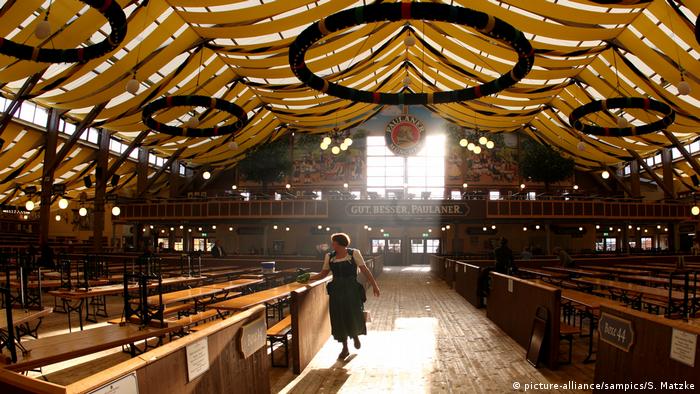 Germany's Oktoberfest, the world's largest beer festival held every year in Munich, will not take place in 2021 due to the coronavirus crisis, officials said on Monday.

The pandemic has forced the cancellation of the hugely popular festival for the second consecutive year. It had been scheduled from September 18 to October 3.

The decision was made by Bavarian state Premier Markus Söder and Munich Mayor Dieter Reiter. Söder said that Oktoberfest is the "most global" festival there is, and that the pandemic is not yet under enough control to allow people from all over the world to gather in tents.

"In the classic beer tents at the big festivals, social distancing, masks and other measures are practically impossible to implement," Söder said.

"The situation is too precarious," he added. "Imagine there was a new wave and it then became a superspreader event. The brand would be damaged forever and we don't want that."

Munich Mayor Reiter said canceling Oktoberfest again is "a great pity" for the millions of fans of the Wiesn, as the festival is called in the local Bavarian dialect.

Reiter warned that canceling Oktoberfest for the second year in a row would have "existential implications" for the people who worked there. The Oktoberfest in 2019 brought in an estimated €1.23 billion euros ($1.5 billion) for the local economy.

The annual festival, which usually brings in 6 million visitors from all corners of the globe, dates back some 200 years.

He predicted that the 2022 event will be "very, very well attended because people are hungry and thirsty."

A smaller rival event is reportedly being planned by officials in Dubai, angering traditionalists in Germany.

The City of Munich has distanced itself from media reports that the Gulf nation is planning its own Oktoberfest, saying it has nothing to do with the original beer festival.

The Oktoberfest has been canceled several times. It was not held during World War II and from 1946 to 1948.

An outbreak of cholera in Munich in 1854 killed thousands of people, forcing organizers to pull the plug,

For Munich businesses, there's no substitute for Oktoberfest