Bar and restaurant closures to combat the spread of the coronavirus meant Germans bought much less beer last year. A German brewing association said the drop was "unprecedented" in the postwar period. 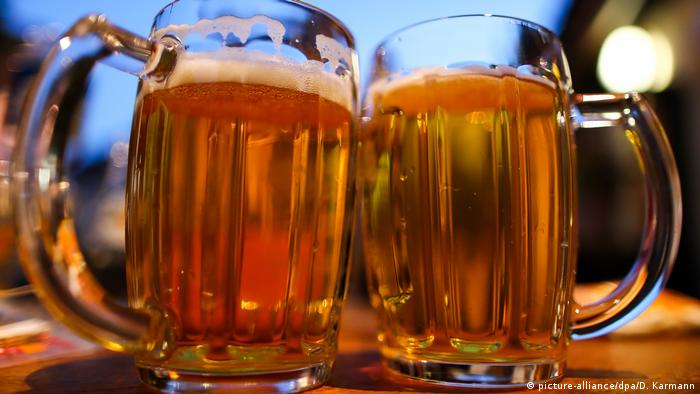 Beer sales within Germany were down 5.5% in 2020 compared with the year before amid coronavirus pandemic restrictions, the Federal Statistical Office has said.

The data doesn't include alcohol-free beer, malt beverages or beer imported from outside the European Union.

Coronavirus lockdowns are to blame

German beer sales have been declining for years as a result of health concerns and other factors. They have now fallen 22.3% since 1993. But last year's drop was particularly sharp.

A month-by-month breakdown pointed to the impact of coronavirus restrictions.

Bars and restaurants in Germany were closed during a lockdown from March until May. They were shut again at the beginning of November.

Correspondingly,sales were down year-on-year by 17.3% in April and down 14.1% in November. Sales picked up during the summer months when restrictions on bars and restaurants were loosened.

Major events and festivals where large amounts of beer are usually consumed, including Oktoberfest, were canceled.

'No comparison' in postwar period

The German Brewers Association said the situation was "dramatic and unprecedented in the postwar period."

Breweries that usually sold to gastronomy and event companies had been hit hardest, in some cases reporting a slump of up to 70% in sales.

Those that sold to shops, which had been allowed to remain open, weathered the crisis better.

The association called for "targeted and decisive" assistance from the federal government.

Domestic sales are most important for Germany's breweries, as they make up around 83% of the total.

But exports of German beer within the EU also suffered last year. They dropped 13.1% year-on-year to 778.2 million liters (206 million gallons).