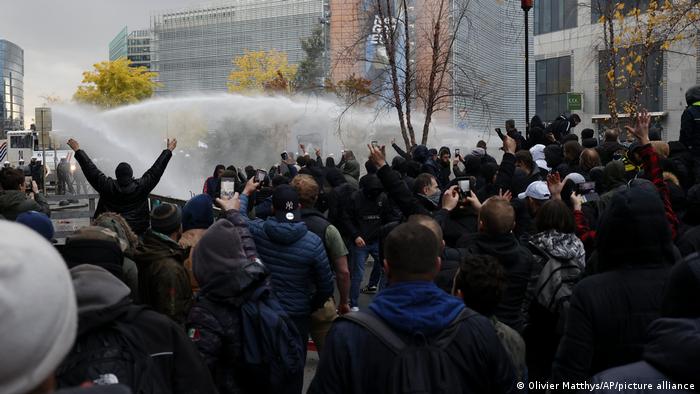 Thousands took to the streets across Europe and Australia on Saturday and Sunday to protest fresh rounds of COVID restrictions.

Several countries have recently reintroduced tighter measures in a bid to combat a resurgent wave of infections.

Austria on Friday announced a nationwide partial lockdown — the most dramatic restrictions in Western Europe for months.

Other nations on the continent have resorted to less severe restrictions, often choosing to ban unvaccinated people from venues like restaurants and bars.

Some 35,000 people took to the streets in Brussels, police said on Sunday. The rally was protesting the coronavirus restrictions in the country, including the requirement to show a vaccine certificate when going to public places such as restaurants.

Cases in Belgium have rocketed, as in neighboring countries. More than 260 people were admitted to hospital with COVID-19-related problems every day last week, on average.

"I've just walked to the bureau across the European district and you could really still smell the tear gas there," she said.

Some protesters told our reporter that they have lost trust in the government and think the latest measures are excessive, as they also apply to people who have been fully vaccinated. Others disputed official numbers provided by the government.

She also noted that, even though 75% of the population are vaccinated across Belgium, the situation is much worse in the capital where only 57% people have been fully immunized.

In the Netherlands, rioters threw stones and fireworks at police and set fire to bicycles on Saturday as protests against coronavirus curbs turned violent for a second night in the country.

Police reported that five officers had been injured in violent confrontations and were receiving treatment in hospital.

At least 40 people were detained across three provinces.

A day earlier, at least two people were injured after police fired shots at protesters and 51 were arrested at an anti-coronavirus restrictions demonstration in the city of Rotterdam.

Earlier on Saturday, several thousand protesters angered at the latest measures gathered in Amsterdam, although another group had canceled their rally because of the previous night's violence.

In the southern city of Breda, near the Belgian border, a musical protest called by local DJs against current COVID-19 measures, which include the 8 p.m. (1900 UTC) closure of bars, restaurants and clubs, attracted a few hundred people.

The Netherlands went back into Western Europe's first partial lockdown of the winter last Saturday with at least three weeks of curbs. It is now planning to ban unvaccinated people from entering some venues. 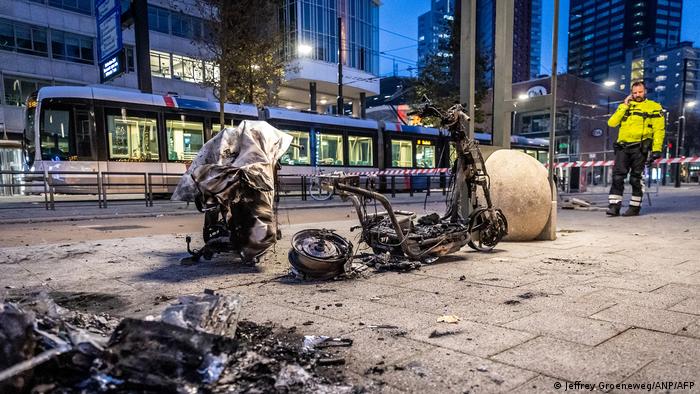 Around 35,000 protesters, many from far-right groups, marched through the Austrian capital Vienna on Saturday.

Among those protesting were members of far-right and extreme-right parties and groups, including the far-right Freedom Party, the anti-vaccine MFG party and the extreme-right Identitarians.

Police said around 1,300 officers were on duty and several protesters were detained, but didn't give specific numbers.

From Monday, 8.9 million Austrians will not be allowed to leave home except to go to work, shop for essentials and exercise. The restrictions will initially last 20 days with an evaluation after 10 days.

The government is making vaccination against COVID-19 mandatory in the country from February 1 next year.

Two test centers in the western state of North Rhine-Westphalia were set on fire on Sunday morning, police said.

The incidents happened in the towns of Ahaus and Gronau, close to the Dutch border. A pavilion and a container were damaged. Police estimated that the total cost of the damages amounted to around €20,000 ($22,570). Both centers had been the targets of attempted arson in the past.

Such centers carry out PCR coronavirus tests, paid for by the government. Unvaccinated individuals — or those who have not recently recovered from an infection — require a negative test from a test center in order to enter many public spaces such as bars and restaurants. 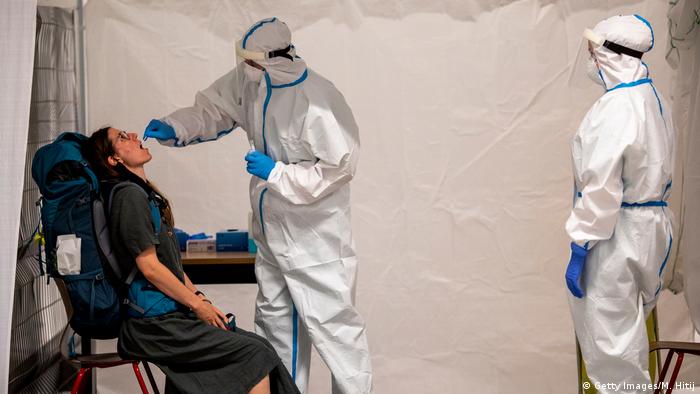 Free tests were reintroduced in Germany, after being ended in early October, as case numbers began to rapidly climb again

In Northern Ireland, several hundred people opposed to vaccine passports protested outside the city hall in Belfast on Saturday.

The government of Northern Ireland voted this week to introduce vaccine certificates for admission to nightclubs, bars and restaurants starting December 13.

Some protesters carried signs that have been widely criticized as offensive, comparing coronavirus restrictions to the actions of Nazi Germany.

In Croatia, thousands gathered in the capital of Zagreb. Some carried flags, nationalist and religious symbols, along with banners against vaccination and what they describe as restrictions of people's freedoms. 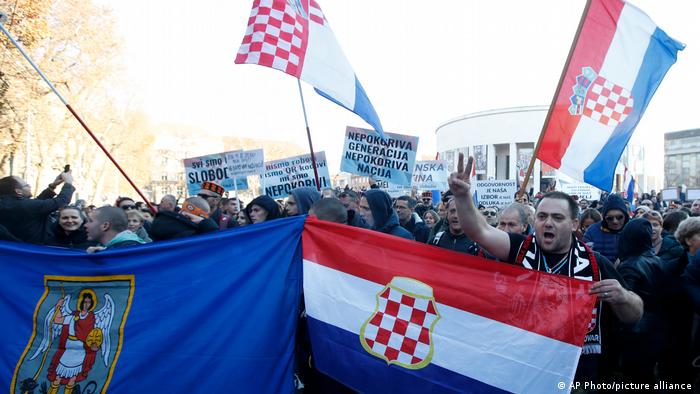 Thousands of protesters gathered in Croatia's capital Zagreb on Saturday

In Italy, 3,000 turned out in Rome's Circus Maximus on Saturday to protest against "Green Pass" certificates, required at workplaces, restaurants, cinemas, theaters, sports venues and gyms, as well as for long-distance train, bus or ferry travel.

"People like us never give up," read one banner, in the red, white and green colors of the Italian flag. Almost no one wore a protective mask. 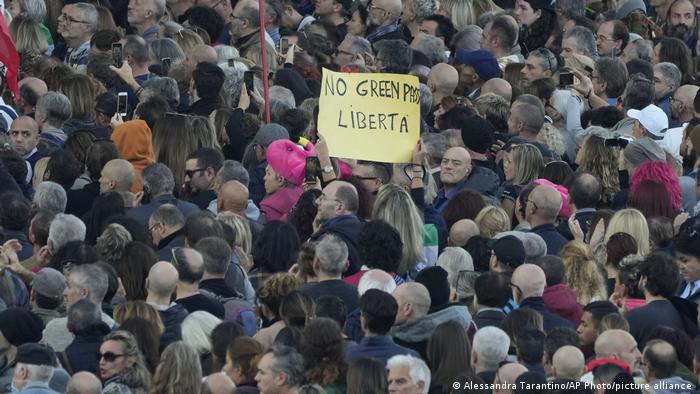 In Italy, crowds gathered to protests the country's 'Green Pass' that shows proof of vaccination

In Sydney, some 10,000 marched and there were protests in other major Australian cities over the weekend against vaccine mandates applied to certain occupations by state authorities. 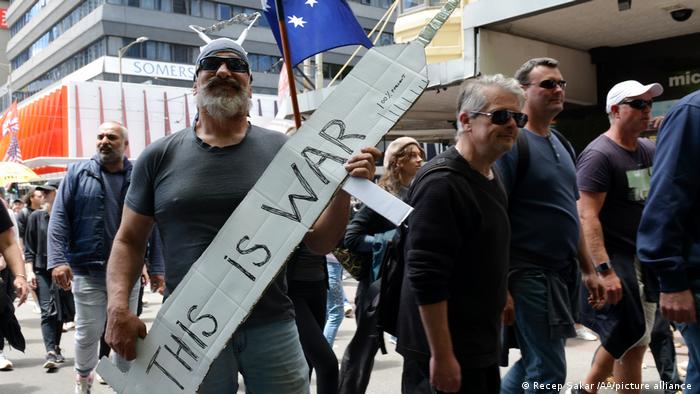 Around 10,000 people turned out in Sydney to protest a vaccine mandate

In Denmark, around 1,000 people protested government plans to reinstate a COVID pass for civil servants going to work.

"Freedom for Denmark," cried some of the marchers at a rally organized by the radical "Men in Black" group who deny the existence of the virus.

France sent a group of dozens of elite security force officers to its overseas territory of Guadeloupe on Saturday after protests against coronavirus rules turned violent.

The deployment follows almost a week of unrest on the Caribbean island which included the burning of barricades in the street.

French Interior Minister Gerald Darmanin said around 50 agents from the GIGN counter-terrorism and RAID elite tactical forces would be sent to Guadeloupe.

Although almost 70% of the population of mainland France is already fully vaccinated, in Guadeloupe the share is less than 50%.