German federal police debate polarization of society in COVID times | Germany | News and in-depth reporting from Berlin and beyond | DW | 19.11.2021

The pandemic has strengthened divisions in German society. But how much has changed and how to address it was hotly debated at this year's conference of federal police. 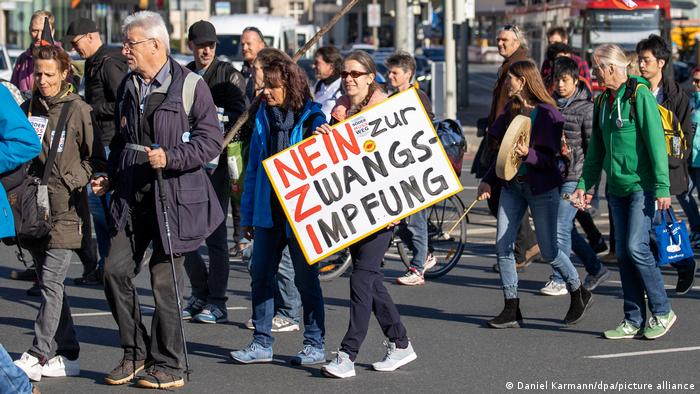 "The mood is gloomy and the situation is very serious," says Dirk Neubauer, the mayor of the small town of Augustusburg, at the fall conference of the German Federal Criminal Police Office (BKA) in Wiesbaden last week. As Germany struggles to contain the fourth wave of soaring coronavirus infections, the eastern state of Saxony has been the state with the highest infection rates.

Neubauer is a guest at the conference titled "Stability not division: What sustains internal security and what must it endure?" He talks about the pandemic and people who refuse to be vaccinated. "We are so far along that the rifts are deepening," he says.

When he says "we," the 50-year-old really does mean everyone. He calls out what he sees as the one-sided stigmatization of his compatriots in Saxony, where the vaccinatiion rate is the lowest in Germany . It is also where the right-wing populist Alternative for Germany (AfD) has its stronghold. "I talk to anyone who is able to keep a calm head," Neubauer says. But there have been conversations he has had to break off.

Nonetheless, Neubauer considers it important to try and reach out. "You won't get people back to the table by excluding them," he says.

Neubauer is a former journalist and has already written two books about his observations: "The Problem is Us" and "Save Democracy!"

Neubauer's presentation differs markedly from the contributions of the other experts at the annual Federal Police conference in Wiesbaden.

Other speakers have used scientific methods to analyze why Germany seems to be so deeply divided.

Munich-based communications expert Carsten Reinemann sees a massive decline in trust in political institutions, which plays out in the current pandemic. Based on his studies, Reinemann believes that many vaccine skeptics feel like "second-class citizens" and hardly use traditional media. At the same time, however, Reinemann defends social media platforms against the blanket accusation that they are just filter bubbles and echo chambers for extremists.

Protest against far-right politics in Berlin

Nicole Deitelhoff of the Hessian Foundation for Peace and Conflict Research, however, believes the situation has been exaggerated. "The polarization of society is less dramatic than many claim," she says. She sees the declining number of participants at vaccine-skeptic Querdenker (lateral thinker) demonstrations as evidence of her point. In the event of another lockdown, however, she expects more protests again. "The core Querdenker will then probably drift further into the right-wing camp."

Holger Münch, BKA president  and host of the conference, agrees. In an interview with DW, he says that protest and polarization are normal, but warns that it's important to watch the fringes of society "to ensure that radicalization does not take root there and new acts of violence are prevented."

Part of his strategy is combatting incitement and threats on social media platforms. "We have to intensely fight all these intimidation strategies," he said.

Münch's determination is in line with the German President Frank-Walter Steinmeier, who addressed the conference via video. "Belief in conspiracies, often paired with antisemitism, prepares the ground for attacks on media, doctors performing vaccinations and scientists, creating a climate of division and agitation," he said.

Who are Germany's extreme-right group the 'Third Path'?

Members of the neo-Nazi party the Third Path were stopped over the weekend attempting to turn themselves into an anti-migrant border patrol. Who is the small but very active extremist group?

Germany's election results show that even after 31 years, vast differences remain between east and west. It's a reminder that unity is more than a formal act to bring together two regions again, says Harrison Mwilima.