The German chancellor stressed the fact that vaccines save loved ones from illness. She says education is key to raising vaccination rates, not mandates. 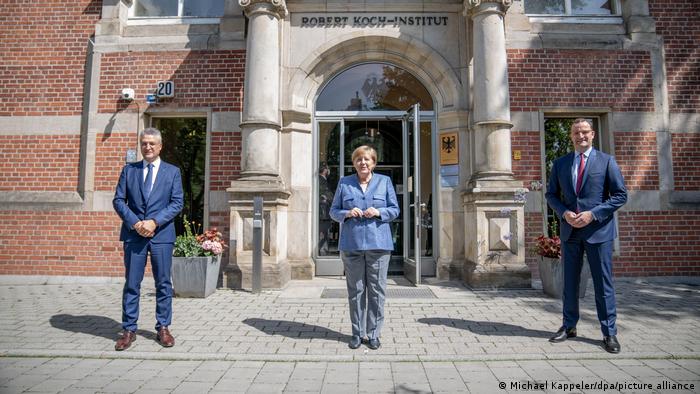 German Chancellor Angela Merkel and Health Minister Jens Spahn used a visit to the government's agency for disease control and prevention, the Robert Koch Institute (RKI), on Tuesday to urge the public to get vaccinated.

But the chancellor also said there were currently no plans to make the jab compulsory. The comments came a day after France made vaccines mandatory for all health workers.

Merkel said "We are still a long way off" from meeting the vaccine quota needed to stop aggressive new variants. Merkel said stopping the spread of the virus and defending against new variants would require 85% vaccination among 12-to-59-year-olds and 90% among those over 60.

Despite a slow start, about 43% of the nation's population is now fully vaccinated.

Still, Merkel stressed there would be no obligation to vaccinate in Germany, saying that mandating shots could endanger public trust.

In outlining her preference for voluntary rather than mandatory vaccination, Merkel said: "I think we can gain trust by advertising vaccination and also by letting as many people as possible become ambassadors for the vaccine from their own experience."

Yesterday, France gave healthcare workers until September 15 to get fully vaccinated or face suspension without pay.

Greece, too, on Monday announced mandatory immunization for healthcare workers who have until September 1 to get the jab; and nursing staff, who will be required to begin receiving vaccinations immediately. Italy imposed such a mandate in May.

On Tuesday, Belgian hospitals published an open letter calling for mandatory vaccinations at the nation's hospitals and healthcare facilities.

Merkel  called on people in the country to talk about getting the vaccine with their loved ones as well as in clubs, groups and the workplace.

Spahn, meanwhile, said that it was no longer a valid excuse to claim there were no vaccine appointments available. He pointed to a large number of vaccines that were now on offer in the country.

Merkel said that the social distancing rules would continue as will the comprehensive testing program. While the signs were positive, the pandemic was not yet over, Merkel added.

Cases in Germany ticking up

Merkel made the comments as the RKI reported the country's seven-day incidence rate had increased  to 6.5 new infections per 100,000 inhabitants. 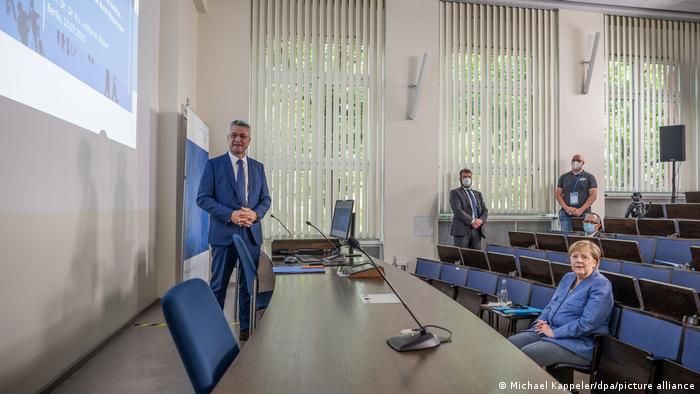 The more contagious delta variant is thought to be behind more than 50% of active cases in the country.

Other key points from the RKI visit

During the visit to the Berlin-based agency, Merkel listened as officials discussed their current tasks, plans and challenges in relation to the delta variant.

Merkel discussed plans to include the number of COVID-19 hospital admissions when assessing the nationwide state of the pandemic.

To date, the seven-day incidence rate has been the decisive metric.

Merkel said the seven-day incidence remained important but that the relationship between the incidence number and hospital admissions had changed. This is because the number of people experiencing serious COVID infections has fallen as a result of the country's ongoing vaccination campaign.

In addition to providing protection against getting the virus in the first place, vaccines also make severe illness less likely should a vaccinated person nevertheless become infected.

Government advisors, such as Wolfram Henn of the German Ethics Council, have also called for teachers to be immunized. The geneticist told Germany's Bild newspaper: "Teachers and educators, by virtue of their choice of profession, have a very special responsibility towards the people entrusted to them."

Europe: is it responsible to ease COVID restrictions now?

What do we know about the delta variant?

The new, more contagious delta variant itself has also undergone several mutations. The exact functions of those mutations have not yet been fully scientifically researched.

So far, however, it is known that they allow the virus to bind more easily to human cells and avoid some immune reactions, as Deepti Gurdasani, a clinical epidemiologist at the Queen Mary University of London, told DW.

Peggy Riese, a scientist at the Helmholtz Center for Infection Research in Braunschweig, Germany, says the delta mutation has also been found to produce higher viral loads, for example, in the throat.