Germany is loosening restrictions while transmission of the delta variant is on the rise. Will this undo everything that has been accomplished? Many people are still unvaccinated, and vaccinated people expect privileges. 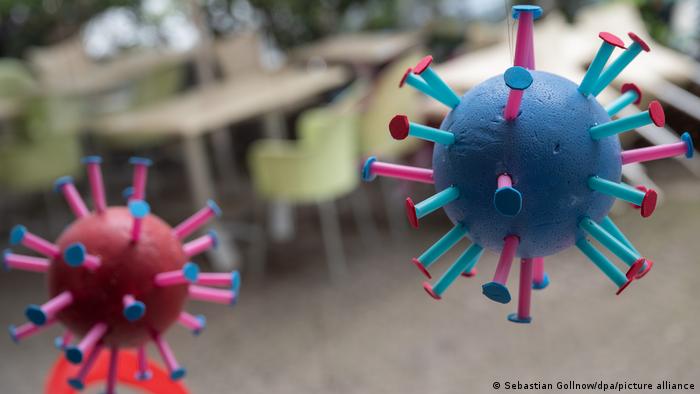 The delta variant is spreading fast in Germany, but the pressure to abolish restrictions is mounting in pre-election times

The situation is contradictory. Nationwide, the infection figures have dropped sharply, and so federal states are lifting the remaining coronavirus restrictions. In North Rhine-Westphalia, Germany's most populous state, dance clubs will reopen, and sporting events and music festivals will take place again beginning this Friday. In places where the number of new infections per 100,000 inhabitants drops to zero, even the requirement to wear a mask indoors in public places is going to be dropped.

But how does this fit with the spread of the highly contagious delta variant, which has just become the dominant variant of the virus in Germany?

Europe: is it responsible to ease COVID restrictions now?

What we know about the delta variant is worrying. In the UK, the seven-day incidence has risen to nearly 270 per 100,000 population in just a few weeks. Still, the British government intends to end pandemic restrictions starting July 19. From mid-August fully vaccinated adults will no longer have to quarantine even if they have had contact with infected people. "Freedom Boost" was the headline in the Daily Express.

UK Health Minister Sajid Javid said society must find a way of dealing with the virus that is appropriate for the pandemic, and that includes allowing freedoms. Not everyone in Britain shares his opinion. Prominent scientists consider it a "calculated risk"; the opposition Labour Party calls it "reckless."

In Germany, some sense of normality is returning. Many vaccinated people take this change as a given. For them, the shot was associated with a double promise: the protection of their health and the possibility of leaving bans and restrictions behind.

This expectation is also driving politics in light of September's federal election. Leaders are calling for greater freedoms for people 14 days after their final vaccine dose.

Once everyone in Germany has had the opportunity to get fully vaccinated, there will "no longer be a legal or political justification for restrictions," Foreign Minister Heiko Maas said.

The importance of vaccination

Vaccine researcher Leif Erik Sander said it was "unwise" to promise the easing of restrictions for vaccinated people now. He expects an increasing number of breakthrough infections, in which vaccinated people are infected. This is confirmed by a study from Israel, where restrictions were largely lifted as the vaccination rate rose.

"What worries me about that study is the fact that 7% of those vaccinated who were then infected with the delta variant became seriously ill," Karl Lauterbach, a doctor, parliamentarian and the most prominent health expert for the Social Democrats, said in a newspaper interview.

Like many others, Lauterbach is urging to intensify the German vaccination campaign. At least 85% of 12-to-59-year-olds and 90% of people over 60 would have to be fully vaccinated to create herd immunity. As of July 8, only 40% of the population is fully vaccinated in Germany. Among people older than 60, that number is 67%.

But, over the past two weeks,the number of vaccinations per day has decreased significantly. This week just under 700,000 vaccine doses were administered, down from more than 1 million three weeks ago.

This is despite the fact that vaccine doses are now readily available, and appointments with primary care physicians or at vaccination centers are able to be obtained on short notice.

A matter of education and income

A study by the trade union-affiliated Hans Böckler Foundation shows that a disproportionately large number of low-income people are still unvaccinated. Among individuals in the lowest one-fifth of the wage distribution, only 49% of respondents in June 2021 said they had received at least one vaccine dose — compared with 71% for the top fifth.

As a result, politicians are calling for more vaccinations to be administered by company doctors at workplaces, and by mobile teams in socially deprived areas. Doctors should go to unvaccinated people, not the other way around so the logic goes. 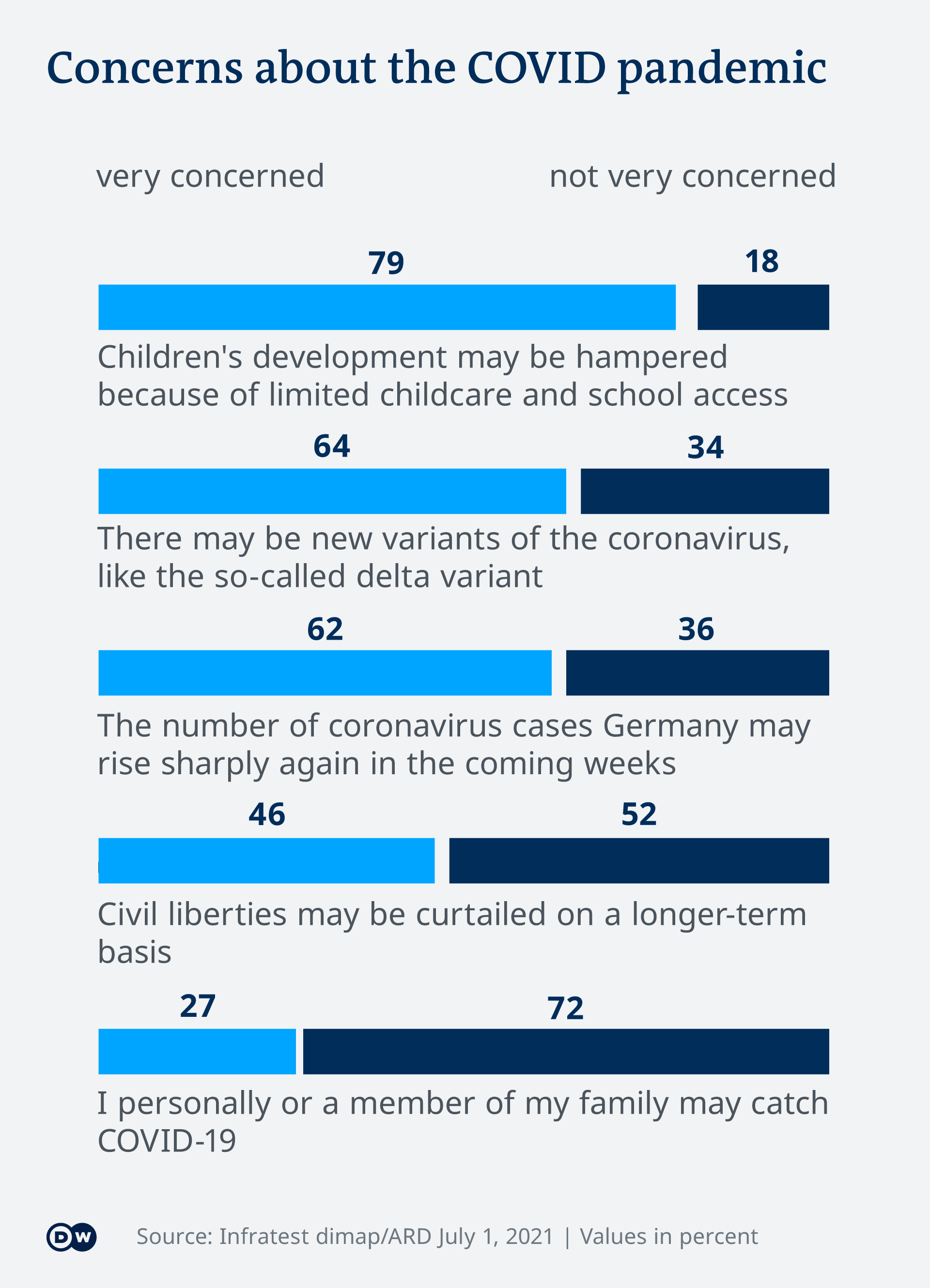 Germans have many fears related to the spread of the pandemic

What to do with children?

It is not only socioeconomic status that plays a role, but also age. There is no vaccine for children under 12. For older children, a single vaccine has recently been approved by EU. The Standing Commission on Vaccination only recommends the vaccine for youths at higher risk because of preexisting health problems. Nevertheless, demand is growing. Pediatricians report that adolescents are coming to their practices without their parents to make appointments.

"They want their freedom back," the Bild newspaper quotes pediatrician Michael Achenbach as saying. He makes serious accusations against the German government: "Politicians said that no child would be disadvantaged because they are not vaccinated, but that does not correspond to the reality."

Students will begin returning after their summer vacation on August 2. Parents and students already fear that it will not be possible to hold regular classes because of the delta variant. But politicians want to avoid upsetting parents ahead of the federal election in September. "Regardless of whether the fourth, fifth, sixth or seventh wave comes: Leave the schools open!" Christian Democrat politician Friedrich Merz said in an interview. He has ambitions for a ministerial post after the election.

German Health Minister Jens Spahn is pushing to vaccinate as many schoolchildren as possible. "We now have enough vaccine in July and August to vaccinate children and adolescents," the CDU politician said on German television. "We will make it possible for whoever wants to be vaccinated to get the first vaccination by the end of August at the latest and then to receive the second vaccination soon thereafter." 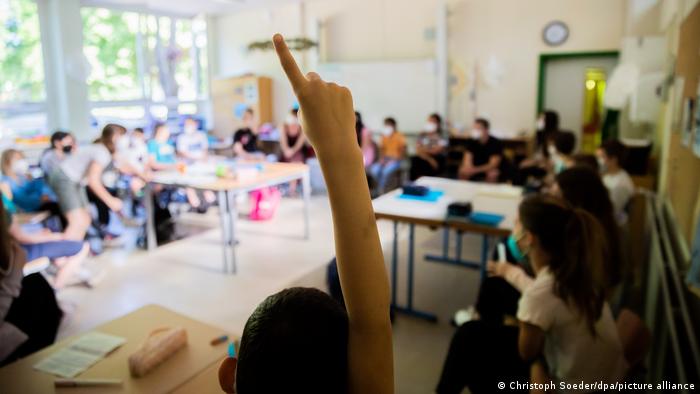 Schools will begin reopening in August

German politicians are also considering incentives to increase vaccination rates. The state premier of the small state of Saarland on the French border, Tobias Hans, has proposed lotteries for those willing to be vaccinated with "a bicycle, a foreign language course" or another "nice prize."

But will that be enough? So far, there have only been isolated discussions in Germany about compulsory vaccination. Politicians say it isn't an option. But for those who are already vaccinated and, above all, for people who want a return of freedoms it is a hot topic. By the fall at the latest, when the election is over and the delta variant has Germany in its grip, the discussion could pick up steam.

Who can currently travel to Germany?

Who is allowed to visit Germany? Do they need to quarantine or is a negative coronavirus test sufficient? Entry regulations to Germany remain complicated. We provide answers to the most important questions.

Most Germans expect new COVID curbs in the fall

Only 16% of Germans think there'll be no new lockdown by the end of the summer vacation season, according to a new survey. However, the chancellor's chief of staff thinks new curbs are "out of the question."