COVID: How are German schools preparing for fall? | Germany | News and in-depth reporting from Berlin and beyond | DW | 27.06.2021

COVID: How are German schools preparing for fall?

Many coronavirus outbreaks have been linked to schools in Germany, even as case numbers recede. And the problem could be far from over. Even after the summer, many children will not have been vaccinated. 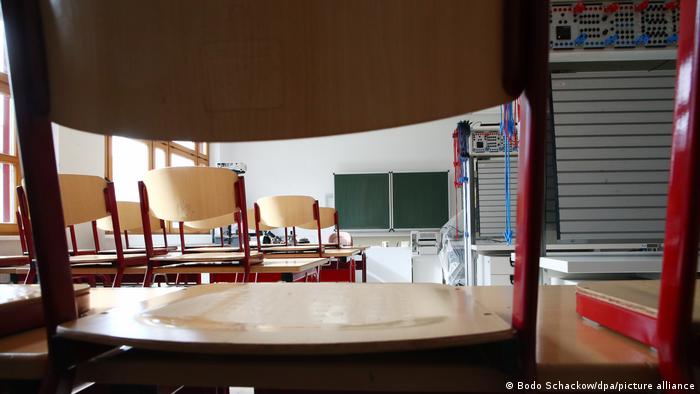 Most German schools will soon be closed for the summer

In Germany, summer vacation has already begun in some states. But after a disruptive year, people already want to know what will happen when the next semester begins. State education ministers recently made a straightforward decision: On June 11, they announced schools would start again with "full face-to-face instruction."

But with new coronavirus variants steadily becoming more dominant in Germany, even as vaccination programs are going well and case numbers are dropping, it's unclear what the status of the pandemic will be by then.

Health Minister Jens Spahn has said face masks and smaller class sizes may still be necessary, and Lothar Wieler, the head of Germany's disease control agency, the Robert Koch Institute, has spoken out in favor of protective measures in schools until spring 2022.

No vaccine for children

The need for these continued measures is primarily because, unlike in offices or factories, there will still be many unvaccinated people in schools in the fall.

While adults have a good chance of getting at least one dose by then, the same is not true for children. Currently, there is no approved vaccine for children under the age of 12 in Germany.Adolescents between the ages of 12 and 18 can be vaccinated, but it has not been explicitly recommended.

Helge Braun, Chancellor Angela Merkel's chief of staff, said that's why it's important for all adults around children — educators and parents — to get vaccinated.

How can young people be protected?

But the Kinderschutzbund, the largest advocacy organization for children and young people in Germany, is well aware of the danger.

"The most important thing now is not to rely on the principle of hope — that the numbers are going down, and the next school year will be fine," said Managing Director Daniel Grein.

Rather, he said, precautionary measures should be tackled during the summer vacation, when no one is in school. "Where something can be done, it should be done now to avoid putting kids through another school year like this," he said.

Mobile or built-in air cleaners are examples of practical measures, he said. Experts have been recommending this for some time to protect children and young people from infection.

And there are also pilot projects already underway. Mobile air purifiers have been in operation in a Munich school for six months — at a cost of around €3,000 ($3,600) each. The money came from the municipality. According to aerosol researcher Christian Kähler at the Bundeswehr University Munich, mobile air purifiers could "virtually eliminate the indirect risk of infection in schools if used correctly." Indirect infection refers to infection by viruses suspended in the room.

At the moment, people are still encouraged to regularly air their rooms, according to COVID measures in place at many schools. But in winter this means that children sit in class wearing hats and gloves.

The German government recently promised to at least provide financial support for the installation of air filters. But for Daniel Grein, that promise may have come too late to be effective.

Education in the time of COVID

Money for laptops and other initiatives

Another place the government has pledged money for schools is in a "digital pact." It was launched before the pandemic, but the budget has now been increased to €5 billion ($5.9 billion).

Locally, this can really help, as an example from the small town of Calau in the state of Brandenburg shows. Here, the only school in the town bought laptops worth almost €28,000 shortly before the summer holidays.

"We have families who don't have much money," said the principal. "So they can't always afford a modern device for homeschooling. This used to present some families with real coordination problems, especially when several siblings have to learn at the same time." 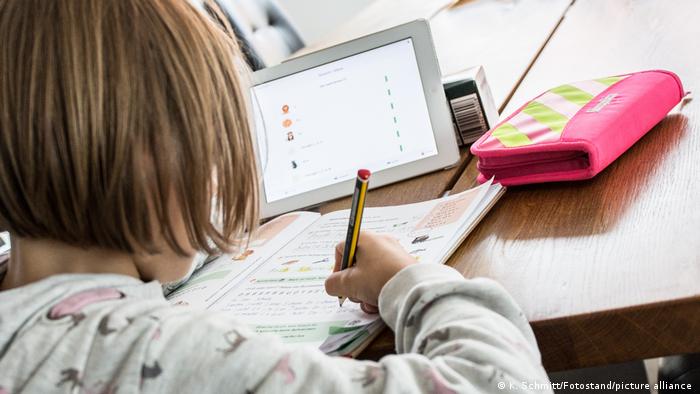 Many young students have struggled to cope with remote learning

Many German states have set up vacation programs specifically for the purpose of allowing children to catch up on lost learning time, such as language courses or swimming schools.

But the Kinderschutzbund doesn't want to paint an entirely bleak picture; there are many schools that have come through the pandemic well and are preparing for the future. But the overall picture is very mixed.

And there are many unanswered questions about the future. How much "normal teaching" should there be? A lot of money and energy was invested in new, digital forms of teaching — was it all for nothing?

In Berlin, where these discussions have already begun, Green Party politician Stefanie Remlinger told broadcaster RBB that she had received feedback from schools that many wanted a combination of face-to-face teaching and digital learning.

"Schools should be allowed to try out more after the pandemic," she said.

A new study has shown that young women have fared worse than other demographics, after drastically cutting down on the time they spent hanging out with friends.

Fact check: What do we know about the coronavirus delta variant?

The delta variant is now present in more than 80 countries. More transmissible than the alpha variant, it is sparking concerns of further loss of lives and lockdowns.