Fact check: What do we know about the coronavirus delta variant? | Science | In-depth reporting on science and technology | DW | 30.06.2021

Fact check: What do we know about the coronavirus delta variant?

The delta variant is now present in almost 100 countries. More transmissible than the alpha variant, it is sparking concerns of further loss of lives and lockdowns. 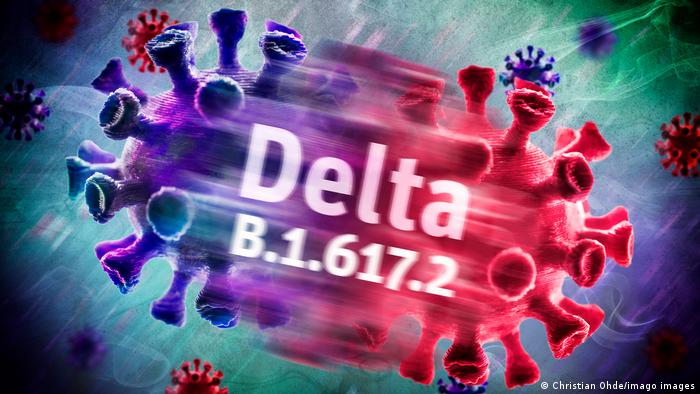 The delta variant is behind more than 90% of new COVID cases in the UK.

What exactly is the delta variant?

The earliest documented COVID-19 case caused by the delta variant (B.1.617.2) was found in the Indian state of Maharashtra back in October 2020, and the variant has since spread widely throughout India and across the world. The World Health Organization (WHO) labeled it a "variant of concern" (VOC) on May 11.

The delta variant has multiple mutations. Scientists don't know the exact function of these mutations at this point in time, but they are associated with allowing the virus to bind to the cells of humans and helping the virus to escape some immune responses, said Deepti Gurdasani, a clinical epidemiologist at Queen Mary University of London.

How widespread is the delta variant?

It is important to note, however, that countries do not report their data to GISAID on a regular or daily basis. In addition, the amount of sequencing carried out differs from country to country. In other words, it is not always determined what variant of the virus caused an infection. This means that the number of unidentified delta cases could be very high.

What is the difference between the delta variant and the delta plus variant?

Reports of a more infectious sublineage of the delta variant, sometimes referred to as delta plus or AY.1, have also emerged. This variant has the K417N mutation, which is commonly seen in the beta variant first identified in South Africa. There aren't too many cases of this variant at the moment, according to PANGO Lineages, a website created by scientists that allows users to assign Sars-CoV-2 sequences the most likely lineages.

"This is a mutation that has possibly been associated again with better escape from vaccines and possibly even increased transmissibility," said Gurdasani. "We don't yet know the properties of this new variant with this particular mutation on top."

Is the delta variant more infectious?

The British epidemiologist Neil Ferguson believes that delta is about 60% more infectious than alpha, which was previously the predominant variant in the UK and, in its turn, is more easily passed on than the ancestral variant that caused the first pandemic wave of spring 2020.

The number of COVID-19 cases in the UK seems to back this up. From the start of June, the number of infections began climbing rapidly once more, and the country is now reporting some 15,000 or more new infections every day. This rise is going hand-in-hand with the increasing spread of the delta variant.

Data from Public Health England (PHE), an executive agency of the UK's department of health, indicates that more than 90% of new COVID-19 cases in the UK are from the delta variant.

PHE research found that the delta variant is associated with a 64% increased chance of household transmission compared to the alpha variant first identified in the UK.

"What we noticed early on in India was that [the delta] variant was outcompeting or growing faster than the so-called Kent or alpha variant that first originated in the UK," said Gurdasani, "and this was very concerning because we knew at that point in time that the alpha variant was already more transmissible than the original virus."

There is still little data available about whether the delta variant causes more deaths. What is known is that, according to the PHE, 117 of the 92,056 people infected with the delta variant in the UK up to June 21 died. That means a  fatality rate of 0.1%, which is very low in comparison with other variants.

However, experts believe that the low rate of deaths largely has to do with the fact that a large proportion of the UK population is now vaccinated against the coronavirus and does not mean that delta of itself causes any less serious cases of the disease.

Indeed, the hospitalization rate reported so far from the UK indicates that the variant causes a more severe course of illness rather than a milder one: The risk of ending up in hospital after becoming infected with delta is almost double that after being infected by the alpha variant, according to data from the PHE and a new study published in the medical journal The Lancet.

"The data from the UK tells us that it is more likely to cause hospitalization, so it wouldn't be surprising if it is found to be more deadly," said Gurdasani.

"While vaccinations in countries where these are widely available may avert some of this, that connection between case and hospitalizations is still not going to be lost," Gurdasani said, "and we know that the majority of the world still has a large, unprotected population that hasn't been vaccinated yet."

"We need more information to determine: is it really the variant itself or is it a combination of factors?" Van Kerkhove said.

Do the vaccines protect us from the delta variant?

These vaccines thus do prevent hospitalization. For this reason, experts are not despairing about the fact that 50 people of the 117 who died from the delta variant in the UK up to June 21 had been fully vaccinated.

Germany's best-known virologist, Christian Drosten, spoke about this in an NDR podcast on the coronavirus. He said that although there were cases of death in people who had received two doses of vaccine, it should be considered what the real cause of death was and how the diagnosis was made.

The high proportion of vaccinated people among those who have died probably, like the above-mentioned low fatality rate, has to do with the fact that around half of the British population has been completely vaccinated. All of the 50 people who died were older than 50, according to the data.

"This doesn't mean that there is no protection," says Gurdasani. "But there is definitely a reduced protection against just infection or asymptomatic mild disease, particularly with one dose, but also with two doses."

Is the delta variant responsible for the pandemic situations in India and the UK?

Whether the delta variant is mainly responsible for the situation in India cannot be scientifically proven yet. More testing and sequencing would be needed for this.

But India is one of the countries worst affected by the pandemic. More than 30 million cases have been registered so far, according to Johns Hopkins University, and the health system is hugely overburdened.

Clinical epidemiologist Gurdasani says that in addition to the spread of the mutation, several other factors have played a role in the massive spread of the coronavirus in India.

"I think it's been a combination of very late action by governments to put basic public health measures in place and overconfidence that herd immunity had been reached prior to this," said Gurdasani.

In the UK, the situation has deteriorated drastically. The 7-day incidence rate for all COVID-19 infections was below 20 at the beginning of May but has since risen to more than 170 new infections per 100,000 people.

How can we protect ourselves from the variant?

Rules like keeping a distance of 1.5 meters (5 feet) from others, washing hands, wearing masks and ensuring good ventilation protect against all known variants of the coronavirus including delta, Germany's Robert Koch Institute (RKI) told DW.

Traveling to so-called virus-variant areas should be avoided, as it has increased the spread of the coronavirus and its variants since the beginning of the pandemic. That is why comprehensive quarantine rules are needed, Gurdasani said.

The WHO's Van Kerkhove said on Twitter that public health and social measures "need to be used strategically and must be supported by governments, communities and individuals to stop all variants of the virus."

What are the symptoms of the delta variant?

According to data from the UK's ZOE COVID Symptom Study app, the symptoms caused by the delta variant differ from the ancestral virus and other mutations. As people in the UK with COVID-19 reported their symptoms to the ZOE app, they described headaches, sore throats, runny noses and fever. In some cases, there was coughing as well.

"It's more like a bad cold for the younger population," says scientist and co-founder of the app Tim Spector.

This could lead people to think they only have a mild cold and continue to go about their day normally. People with these symptoms should stay home and get tested, says Spector.

This article has been updated from an earlier version published on June 23.

The good summer weather and strong vaccination numbers can obscure the dangers that the coronavirus still poses. Public health officials in Germany want to avoid a repeat of the false sense of security in summer 2020.

UK Government: Variants of concern or under investigation: data up to 9 June 2021

Effectiveness of COVID-19 vaccines against hospital admission with the Delta (B.1.617.2) variant