The delta variant is spreading in Germany and is believed to represent more than 50% of active cases. Follow DW for the latest. 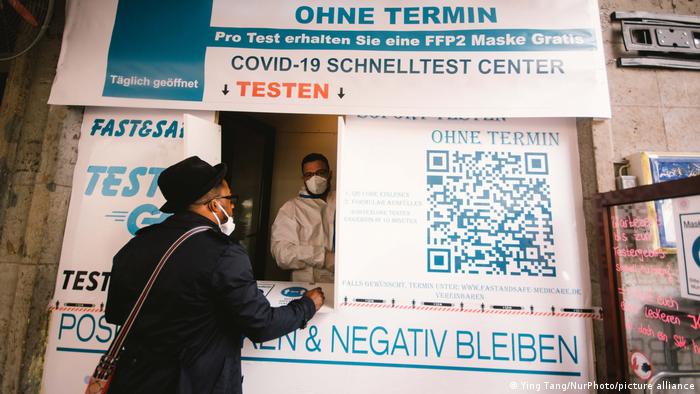 The Delta variant accounts for more and more cases in Germany

Cases of the more infectious delta variant of the coronavirus more than doubled last week in Germany and are likely to increase further in the coming days.

The delta variant accounted for around 36% of the cases in the week of June 15 - 20, up 15% from the week before, said Lothar Wieler, president of the Robert Koch Institute (RKI). He told officials the variant now already represents more than 50% of registered cases.

French Health Minister Olivier Veran said the delta variant accounted for around 20% of the cases in France. In an interview with France Info radio, Veran said the estimate had increased from the previous one of 9-10% of cases.

Primary tests by US manufacturers of the Moderna vaccine have revealed it protects against the Delta variant of COVID-19.

The tests involved blood samples taken from eight test subjects one week after the second vaccination dose. The claims have not been reviewed by other scientists.

The announcement comes as India approved the Moderna vaccine for emergency use as it grapples with the pandemic.

Here's a wrap of other major coronavirus developments around the world.

At least 300 Finnish football fans who went to the Euro 2020 matches have caught COVID-19, according to the health officials in the European country. The authorities estimate that between 4,500 and 6,000 people traveled to Russia's St. Petersburg to support their team. The officials were trying to track down all of the fans.

Europe's airlines and airports warned of chaos and hours-long waiting lines due to the European Union's COVID-19 certificate, unless countries manage to coordinate it better.

"As passenger traffic increases in the coming weeks, the risk of chaos at European airports is real," said a group representing airlines, in a letter.

The digital travel certificates are due to come into effect from Thursday, and are designed to show via QR codes, whether passengers are fully vaccinated, have recently recovered from COVID-19, or have had a negative test.

Mallorca has tightened its entry rules for large groups, after about 1,000 students were infected during high school graduation trips. Visitors will now be asked to present proof of vaccination or a COVID negative certificate.

The initiative to create COVID-19 vaccination hubs in Africa could be "revolutionary," according to the World Health Organization (WHO). At the same time, the agency warned that its success depended on pharma giants sharing production technology.

"The key question is: will those in the industry with the most advanced technology accept to transfer it," said WHO's top representative for multilateral affairs Agnes Buzyn.

Last week, the WHO said they were setting up a hub in South Africa to let poorer countries produce their own mRNA vaccines. WHO is currently negotiating with Pfizer and Moderna, who use mRNA technology for their jabs.

Nigeria is set to receive 4 million doses of coronavirus vaccines under the COVAX scheme. The country had received 4 million doses in March, when it kicked off its vaccination program. The country is also trying to procure the Johnson & Johnson vaccine through the African Union Commission and AfreximBank.

Senegal's aspirations of reaching the Olympic Games for basketball were crushed, as their team was prevented from flying to Serbia for the qualifying tournament.

World basketball governing body FIBA said Senegal would not attend the qualifiers in Belgrade after reporting coronavirus cases last week while in Germany for a tune-up game.

The Tanzanian government will spend $470 million buying vaccines, and supporting the economy, especially sectors affected by the coronavirus. President Samia Suluhu Hassan said half the amount will be spent on vaccines, protective gear and other medical equipment, and the rest will be used to revive the economy.

"The near-term future of sub-Saharan Africa will be one of repeated waves of infection, which will exact an ever-increasing toll on the lives and livelihoods of the region’s most vulnerable, while also paralyzing investment, productivity, and growth," Georgieva wrote in a blog post along with IMF Africa Department director Abebe Selassie.

Expatriate workers from Pakistan stormed a vaccination center in Islamabad to get BioNTech-Pfizer or AstraZeneca COVID shots so they can travel for work to Saudi Arabia. The Middle Eastern nation only allows visitors who have received vaccines from their approved list.

Travelers without those shots are required to quarantine at personal cost, which is difficult for many workers.

More Australian cities announced lockdown, amid fears of the delta variant, which was found in five of its eight states and territories. Brisbane and Perth announced a three and four day lockdown respectively, joining Sydney and Darwin, which were already under lockdown.

Vietnam approved the Moderna vaccine for emergency use, making it the fifth vaccine to get approval from the government. AstraZeneca, Sputnik V, BioNTech/Pfizer, and Sinopharm were already approved earlier this year.

Philippines extended curbs and restrictions till mid July, as authorities are still struggling with vaccine distribution and a spike in cases in some regions. The country has fully vaccinated only 2.5 million
people, or just 3.6% of the targeted 70 million for this year.

The Indonesian government has delayed reopening Bali for tourists, as authorities wait for cases to fall significantly. The tourism destination has suffered heavily due to the pandemic.

"We were targeting end of July, beginning of August, but we just have to be mindful of where we are in this recent spike," Indonesia's Minister for Tourism and the Cultural Economy, Sandiaga Uno told Reuters agency.

The US has started sending 2,5 million doses of Moderna vaccines to Bangladesh, a White House official told the AFP news agency. The Asian country has seen "a 55% week-over-week increase in cases, driven largely by the Delta variant," according to the source.

Walt Disney postponed its first Disney Dream test cruise since the onset of the pandemic, after five crew members out of 600 tested positive. The five were vaccinated and asymptomatic, and had tested negative several times before. A new sailing date has not been announced yet, for the cruise to set off from Cape Canaveral.

Kuwait will allow its citizens who have received at least one dose of the vaccine to cross its land and sea borders. The government will also allow close relatives of citizens and their domestic help to do the same.