After weeks of a downward trend, Germany's incidence rate has now risen for the fifth day in a row. But with infection figures remaining low, politicians are arguing for remaining COVID curbs to be lifted. 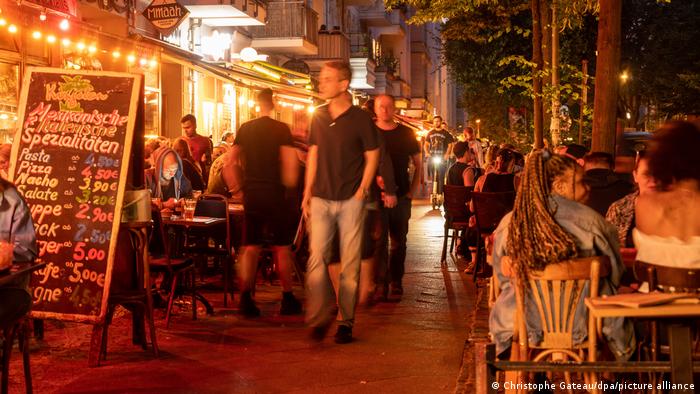 Officials are rolling back restrictions across Germany, but cases are slowly ticking up

While many areas of Germany continue to roll back restrictions amid low COVID-19 case numbers, the country's incidence rate rose for the fifth day in a row on Sunday.

Although the rate remains at a low level compared to the spring, officials continue to urge caution, particularly in light of rapidly rising cases in other European countries and amid a reluctance to reimpose curbs.

At the same time, a growing chorus of politicians — including those in Chancellor Angela Merkel's government — are pushing for remaining restrictions to be lifted over the next few weeks.

However, the incidence rate — the number of new infections per 100,000 inhabitants over a seven-day period — rose for a fifth day in a row, coming in at 6.2 compared to 5.8 on Saturday.

The incidence rate a week ago was 5, according to the RKI.

Germany eases restrictions for many travelers

The rate of infection is still much lower than its April peak of 169.3, or its all-time high of 197.6 in December 2020, when tens of thousands of new cases were reported every day.

However, the latest figures also come amid concerns about the spread of the delta variant, which is party a spike in cases in Portugal, Spain, Russia and Great Britain.

The delta variant, which was first identified in India, is currently the "dominant variant in Germany," according to the RKI.

While the incidence rate may be on the rise, many politicians in Germany are deeply reluctant to reimpose curbs.

Some argue that the vaccination rate should play a stronger role in pandemic decision-making. People who are vaccinated are expected to suffer less severe symptoms and recover quicker, even if infected.

"The more people are vaccinated and tested, the more the incidence value alone loses its informative value," Tobias Hans, the state premier of the small state of Saarland, told the Welt am Sonntag newspaper on Sunday.

Hans, a member of Merkel's center-right Christian Democrats (CDU), argued that the country's hospital bed occupancy would be a better measure of how severe Germany's pandemic situation is going forward.

"If everyone has received a complete vaccination offer and the vaccination protects against severe illness, including newer variants, we must gradually take our coronavirus measures back," he told the paper.

How dangerous is the delta variant in Germany?

How dangerous is the COVID-19 delta variant in Germany?

The latest figures from the RKI show that 58% of people eligible to get the vaccine in Germany have received a first dose, while 42% are fully vaccinated.

The center-left Social Democrat (SPD) said they could be eased once a vaccine offer has been extended to everyone — a milestone is expected to be reached in August.

Warnings against closing businesses and schools

The Association of German Chambers of Industry and Commerce (DIHK) also cast doubt on the continued weight of the incidence rate, saying repeat lockdowns should be avoided at all costs.

"The incidence rate alone should not be the measuring stick of all things when there is a high vaccination rate in Germany," DIHK president Peter Adrian told the Handelsblatt newspaper.

The Organization for Economic Cooperation and Development (OECD) also strongly cautioned against shutting schools on Sunday, saying it led to major social drawbacks for many students in Germany.

He urged for schools to be outfitted with the proper technology and equipment to weather future surges in cases.

"Distanced learning only worked for those who were already prepared for it,"  Schleicher said.

While the debate rages on over whether to ease remaining COVID curbs, other German lawmakers appealed for the public to remain cautious.

"There is a shadow over this European championship and UEFA is responsible for deaths through its ignorant approach. That has to be said so clearly. UEFA has failed in my view," Lauterbach told soccer magazine 11Freunde.

Wolfgang Schäuble, the president of the Bundestag Germany's lower house of parliament and a veteran CDU politician, also voiced "great concern" over the packed stadiums for the Euro 2020 championship in London.

"Therefore: Dear people, you are happy that we can go out to eat again and meet people — but don't overdo it," he told the Bild am Sonntag newspaper.

A 90-year-old Belgian woman had been infected with both the alpha and beta variants of coronavirus. Meanwhile, Germany's incidence rate rose for the fifth day in a row. Follow DW for the latest.

The coronavirus pandemic has been a disaster for many young children. With schools and sports facilities closed, kids are missing out on the physical activity they need for physical, mental and spiritual development.