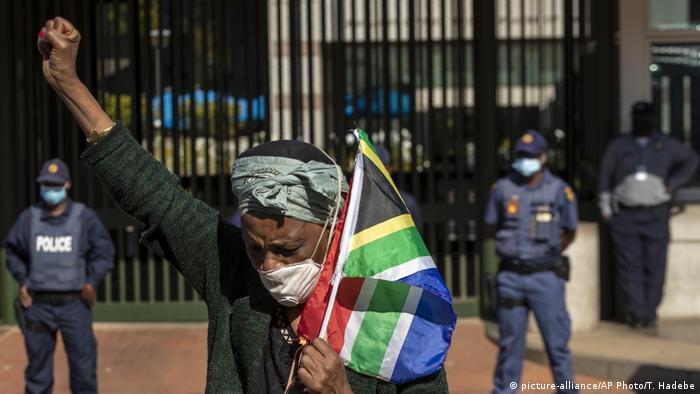 South Africa's economy has taken a hit during the COVID-19 pandemic, leaving the majority of the country's population frustrated as the future looks increasingly uncertain.

With the official tally at over 50,000, South Africa has recorded more coronavirus cases than any other country in sub-Saharan Africa. The number of deaths has now surpassed 1,000.

"The situation is unfolding and it's very problematic because the worst is still to come," DW correspondent Adrian Kriesch said from Cape Town, the worst-hit region in South Africa.

"We're seeing an exponential growth of cases in Western Cape at the moment. We will probably reach the peak by the end of this month."

Some South Africans point to flaws in the leadership of President Cyril Ramaphosa which has led to the worsening economic situation, while others say Africa's most industrial state was already in a precarious position when the coronavirus crisis began. The latter place the blame on Jacob Zuma, Ramaphosa's scandal-ridden predecessor.

"South Africa was already at the precipice of a fiscal cliff and in an economic recession at the time the country went into lockdown," Jannie Rossouw, a professor at School of Economics and Businesses, Wits University, told DW. 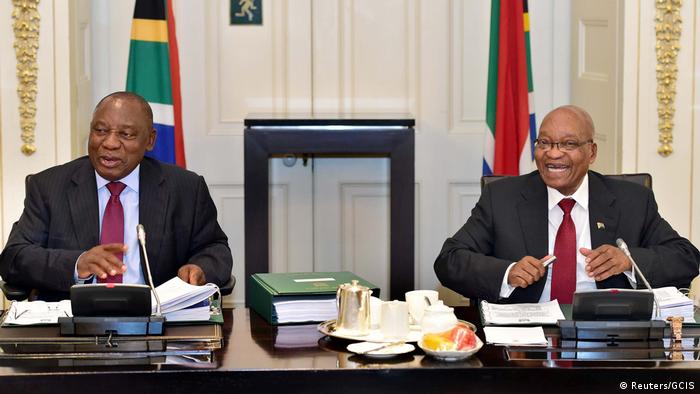 "Naturally, the Zuma administration is to be blamed, and Ramaphosa must share in such blame," Rossouw added.

The country's economic growth over the past five years stood at an average of 1.5%, while the official unemployment rate was at 29%. The country's credit rating was downgraded by major international credit rating agencies, including Moody's and S&P.

"If I were to rephrase Ramaphosa's statement, I would say: COVID-19 dealt a crushing blow to a struggling economy, after a decade of politically orchestrated looting and plunder, that could [barely stand] a mild wind, let alone a hurricane."

The shadow of state capture

The economy was also severely weakened by a system of corrupt practice known as state capture, says South African Collen Lediga, an academic tax revenue expert from the University of Bochum, Germany.

"Although I support the implemented measures, I think COVID-19 exposed the neglected social and economic issues of the vulnerable communities," Lediga told DW.

The majority of South Africans — at least 54% of households — have no access to clean water, while at least 14% live in crowded informal settlements.

To minimize the economic impact of COVID-19, South Africa introduced various fiscal and monetary stabilization measures such as direct cash transfers to households and businesses through a $26 billion (€23 billion) recovery package. 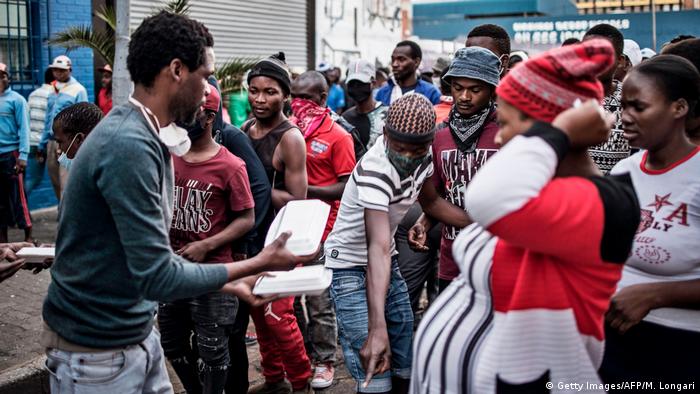 Residents queue for food in Johannesburg. Many in South Africa's poorer communities have lost their jobs as a result of the coronavirus lockdown and are relying on newly introduced support measures

But Abedian says the measures are nowhere near what could be considered a recovery package.

"It amounts to a scheme whereby the government borrows [money] to avoid a human tragedy and has yet to figure out how to avoid an economic collapse," he explains. "This knee-jerk reaction is driven largely out of fear and not based on wisdom and well-considered strategy."

Still, like many other countries around the world, South Africa is beginning to loosen the restrictions imposed since March. South African children returned to school on Monday: So far, only pupils in grades 7 and 12 have returned to class, with other years expected to follow gradually.

Last week, teachers' unions had urged staff to defy the government's orders to go back to work, claiming that the majority of schools lacked sufficient health and hygiene measures to keep educators and pupils safe.

Many schools in South Africa — especially the government schools — are in poor shape, particularly in rural areas.

Observers say that maintaining hygiene and hand-washing measures at schools is impossible, as most schools have no running water.

The shutdown has also exposed the inequality between black and white, rich and poor, which still persists in South Africa's education system a quarter-of-a-century after the end of minority white rule.

The closure of schools means that only children from educated families are able to advance in their education as they have access to homeschooling, while the majority of children who are from poor communities lag behind.

"COVID -19 is expected to widen the already disproportionate participation of poor and rich graduates in the national economy," says Lediga. 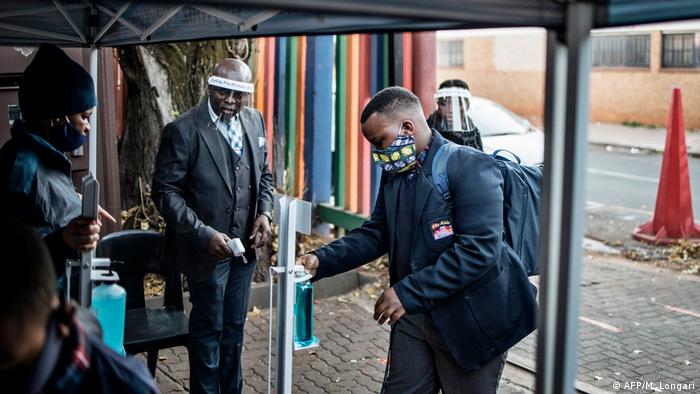 A student sanitizes his hands at the City Kidz Pre & Primary School in Johannesburg. Students are gradually going back to school as lockdown measures ease, but not all schools are able to maintain hygiene measures

Poor communities do not have the required internet infrastructure to participate in online lessons, for example.

The pandemic has also negatively impacted the lives of those children who rely on school food programs, says Johannesburg-based DW correspondent, Thuso Khumalo.

"This is the food they are usually given at schools, supplied by the government through independent contractors," says Khumalo. "The closure of the schools has meant continuous hunger to thousands of children relying on the food for survival."

On Tuesday, a Pretoria court is scheduled to hear a challenge brought by British American Tobacco South Africa (BATSA) concerning a ban on tobacco sales during the coronavirus lockdown.

A ban on alcohol has been lifted, but selling and buying tobacco will remain prohibited.

The authorities have cited health reasons for the ban, but human rights groups and economic experts say it will have dire consequences for the already-faltering economy.

"The ban on legal tobacco sales pushed the cigarette trade into the hands of illegal cigarette manufacturers and smugglers," says economic expert Rossouw. 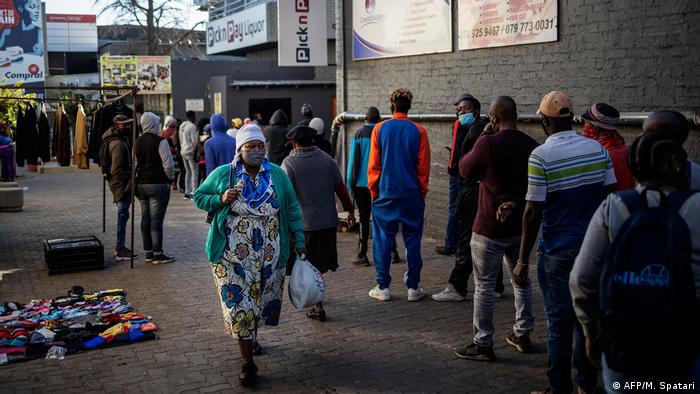 Customers queue outside a liquor shop in Soweto, Johannesburg. Liquor sales have resumed in South Africa, but only for home consumption

Initially, Ramaphosa announced that tobacco would be permitted, but a cabinet minister subsequently overturned this decision. "I call this the 'tobacco tango'," says Rossouw. "I am also really perplexed by the Minister's assumption that the ban on tobacco sales resulted in millions of South Africans quitting a smoking habit."

So far, the country has lost 1.5 billion rand (€79 million, $89 million) in tax revenues and employment losses, according to tax expert Lediga.

"The ban has also fortified the trade in illegal alcohol and cigarettes, which will remain post-COVID-19," he says.

How can South Africa recover from the crisis?

Economists say the country is already on a slippery slope to socialism, but add that authorities need to scrap unnecessary regulations if they are to get the nation back on its feet.

Not doing so "will merely make it less attractive to do business without any economic advantage," says Rossouw. At the same time, he urges, it is necessary to contain government expenditure. "In this regard, the most challenging aspect is reigning in civil service remuneration, which accounts for some 45% of government revenue."

Abedian believes it's time for less talk and more action.

"South Africa needs to learn from its repeated mistakes over the past 25 years," says Abedian. "Creating a capable state is a requisite for sustainable growth and development. Much lip service has been paid to this goal, but no real change has been effected over the past 20 years. Instead, the political leadership has promoted mediocrity within the machinery of the state."

The United Kingdom has started quarantine measures for new arrivals, and several Indian cities will lift restrictions despite the country reporting a daily record of new COVID-19 cases. Follow DW for the latest. (08.06.2020)

The coronavirus pandemic has relaunched a debate on the treatment of children in Koranic schools in West Africa. The pandemic has made them more vulnerable. But very little has been done so far to support them. (08.06.2020)

After a week-long strike, unions have accepted South African Airways's offer. Economists believe the state-owned airline’s crisis is only the tip of South Africa's problems. (22.11.2019)