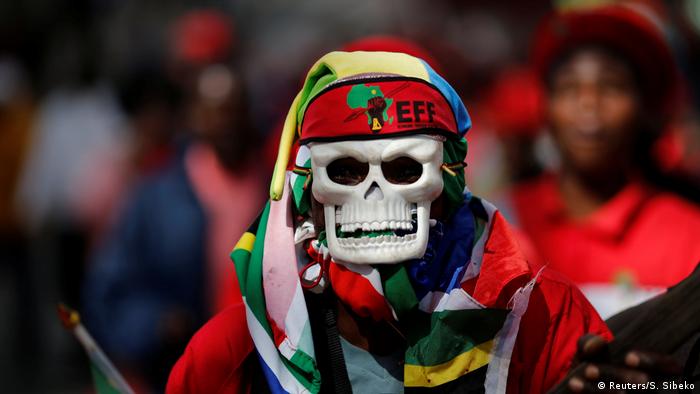 South Africans are celebrating Freedom Day - the anniversary of the first post-apartheid elections - amid deepening rivalry in the ruling ANC between supporters and opponents of President Jacob Zuma. (26.04.2017)

South Africans have lashed out at President Jacob Zuma after he sacked Pravin Gordhan as finance minister. The opposition has called for a vote of no-confidence as the business community warns of economic repercussions. (31.03.2017)

The agency also assigned a negative outlook to South Africa in a Friday statement, meaning a further downgrade is considered possible in the short or medium term. The announcement comes after two other global rating agencies, Fitch and Standard and Poor's, downgraded the African economic powerhouse to non-investment grade, more colloquially known as "junk status."

Unemployment in South Africa stands at 27 percent, and the country has struggled with sluggish growth for years. According to official statistics cited by the AFP news agency, the country also entered recession in this year's first quarter, for the first time since 2009.

In justifying the downgrade from Baa2 to Baa3, Moody's referred to Jacob Zuma's controversial cabinet reshuffle in March. The move saw Zuma replace his popular Finance Minister Pravin Gordhan, who has long clashed with the president over graft and public spending. The surprise midnight announcement also saw several other cabinet members lose their jobs. Markets responded violently to the move and South Africans gathered to protest the embattled leader.

These events "illustrate a gradual erosion of institutional strength. The institutional framework has become less transparent, effective and predictable," Moody's said in a statement.

"As a consequence, Moody's views the underlying political dynamics which led to the March cabinet reshuffle as posing a threat to near- and medium-term real GDP growth."

Zuma holds on to power

The agency also believes that the debt burden for South Africa would reach about 55 percent of GDP in the fiscal year 2018/2019 and continue to grow.

"It is unlikely that a political consensus will emerge which supports investment in the economy and reinvigorates the reform effort sufficiently quickly to reverse the expected negative impact on growth and on the government's balance sheet," the agency said. "The opposite scenario [...] has a higher likelihood."

Jacob Zuma has faced many political challenges since taking office in 2009. With the support of his party, the African National Congress (ANC), he has managed to survive numerous political scandals and graft accusations, and at least four no-confidence motions in the parliament.

The opposition Democratic Alliance party hopes to use the latest political unrest and the economical downturn to chip away at the ruling's party majority.

While Zuma is set to stay in power until 2019, the ANC is due to name his successor in December this year.