South African President Cyril Ramaphosa has pledged to battle a report accusing him of misleading lawmakers on campaign funding. A state watchdog body has linked Ramaphosa's campaign to money laundering. 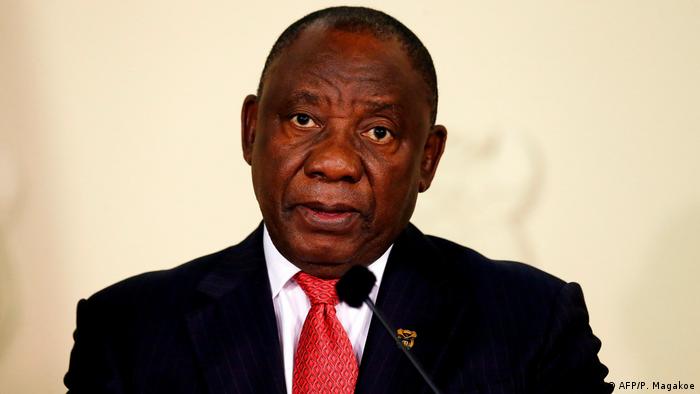 Responding to a critical report by South Africa's public protector, or ombudswoman, President Cyril Ramaphosa has pledged to challenge allegations of money laundering in court.

The report, released Friday, links Ramaphosa's 2017 campaign for the ruling party presidency with a company embroiled in a corruption scandal. According to the watchdog, the president "deliberately misled" lawmakers by denying knowledge of a suspicious 500,000 rand (€32,000/$36,000) donation.

In a TV address on Sunday, Ramaphosa described the document as "fundamentally flawed" and containing "numerous factual inaccuracies of a material nature." He added that his legal team was applying for a judicial review.

"I have decided to take this action not out of disrespect for the public protector as a crucial institution of our democracy, but in the expectation that the institution will ultimately be strengthened by an independent and impartial judicial review," Ramaphosa said.

According to Mkhwebane's report, Ramaphosa violated the code of ethics while discussing the donation from local businessman Gavin Watson with members of the parliament. The businessman serves as a CEO of Bosasa, now known as African Global Operations, a company that provides extensive services to the government.

Ramaphosa initially told lawmakers that the payment was to his son Andile for consultancy work for Bosasa. But he later said it was a donation toward his campaign to become African National Congress (ANC) party leader.

The report also raised suspicions of money laundering over payments in and out of bank accounts linked with Ramaphosa.

Talking to local media on Friday, Mkhwebane claimed to have evidence that Ramaphosa lied when he denied knowledge of Watson's donation.

On Sunday, Ramaphosa said he did not have complete information about fundraising details while he ran to succeed Zuma as leader of the ANC.

"I knew there was money being raised and I attended and addressed some of the fundraising dinners," Ramaphosa said in his televised statement. "So there was knowledge but the knowledge was limited."

The affair is a serious blow to Ramaphosa, who took over as the country's president after Zuma was forced out due to widespread allegations of corruption last year. The 66-year-old Ramaphosa was expected to clean up top corrupted officials from the government.