WHO warns coronavirus could kill 150,000 in Africa, as Burundi expels experts

COVID-19 could infect a quarter of a billion people in Africa and kill 150,000 within a year, a WHO model has projected. Amid rising death tolls, Burundi expelled experts from WHO, drawing international condemnation. 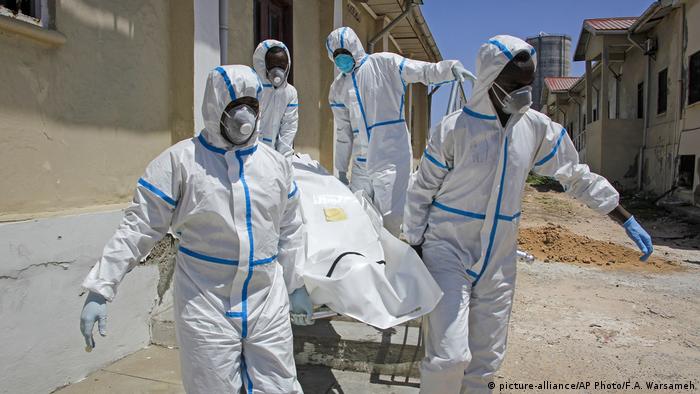 The novel coronavirus could kill 150,000 people in Africa over the next year unless "urgent action" is taken, researchers warned in a regional report from the World Health Organization (WHO) released Friday.

The study, published in the journal BMJ Global Health, modelled likely rates of exposure to the virus in 47 African countries.

Researchers predicted that around 22% of Africa's population of 1 billion will be infected within a year, with around 37 million symptomatic cases. This could result in around 150,000 deaths.

While the modelling showed an overall lower infection rate in Africa compared to Europe and the US, experts warned that health systems there could quickly become overwhelmed.

"Interruption of its transmission to prevent widespread community transmission is critical because its effects go beyond the number of COVID-19 cases and deaths and affect the health system capacity to provide other essential services," the report read.

The outbreak could result in the diversion of medical resources away from health issues already present in region, such as HIV, tuberculosis, malaria, and malnutrition. For this reason, African countries could see higher fatality rates among relatively young people, researchers said.

"The region will have fewer deaths, but occurring more in relatively younger age groups, amongst people previously considered healthy -- due to undiagnosed non-communicable diseases," the report said, adding that these trends could already be seen emerging.

The results showed the largest number of overall infections occurring in Nigeria, Algeria and South Africa, with Mauritania, Seychelles and Eritrea recording the fewest overall cases.

However, in terms of per capita infections, Mauritius, Seychelles, and Equatorial Guinea were positioned to have the highest proportion of their populations affected.

Read more: COVID-19: A threat to peace efforts in Africa

Action must be taken now

The study encouraged the use of non-pharmaceutical measures as the best approach to counting the outbreak.

"The effect of avoiding widespread and sustained community transmission of SARS-CoV-2 is significant, and most likely outweigh any costs of preventing such a scenario," researchers wrote.

They called for swift improvements to healthcare facilities, with an emphasis on primary hospitals increasing patient capacity.

Could a tuberculosis vaccine guard against the COVID-19?

WHO expelled from Burundi

Burundi's Foreign Ministry on Thursday expelled WHO experts, accusing them of "unacceptable interference in [Burundi's] management of the coronavirus."

Burundi is preparing for presidential and parliamentary elections next week. The public health experts had criticized the government's decision to dismiss social distancing recommendations aimed at preventing the spread of "coronavirus during the electoral campaign."

The UN Commission of Inquiry on Burundi said it "deeply regretted the recent decision by the government to declare persona non grata the country representative of WHO and three of its experts."

Burundian human rights activist Pacifique Nininahazwe told DW that there had been tensions between the government and WHO due to "the opaque management of the coronavirus crisis in Burundi."

"It's not that surprising," Nininahazwe said of the decision to throw out the WHO experts. "The relationships between Burundi and the international community are very, very bad since the 2015 (political crisis)."

When asked about expulsion, Burundi's Vice President Gaston Sidimwo told DW: "I don't really know anything about this decision," adding that he was currently campaigning in the country.

East Africa is battling its worst locust invasion in decades. Amid the COVID-19 crisis, countries are fighting to stop a new generation of locusts swarms, which could jeopardize food security. (11.05.2020)

Life has gotten tougher for Africa's journalists at a time when their work is more important than ever. Many independent media outlets are struggling to survive the financial fallout of the coronavirus pandemic. (14.05.2020)