Italy has posted its highest number of daily infections as its citizens rebel against restrictions. Now, a second wave of lockdowns is being implemented across Europe, with Germany being the latest to announce measures. 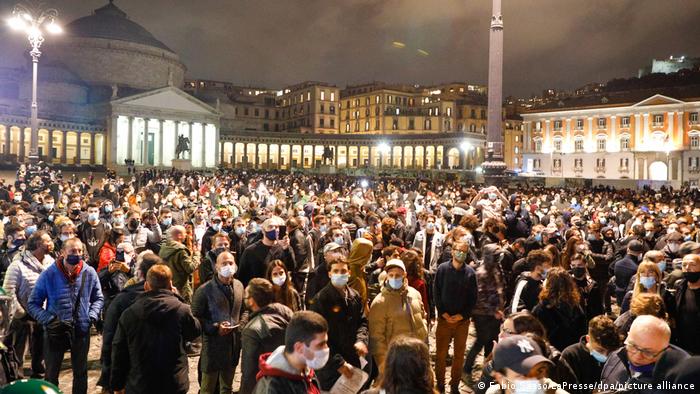 Italy reported a record 24,911 new coronavirus infections on Wednesday. It was the second day in a row the country has registered more than 20,000 new cases. The 205 deaths logged Wednesday brought Italy's total number of COVID-19 fatalities to 37,905, second only to the UK in Europe.

The northern cities of Milan and Turin saw scenes of unrest from Monday into Tuesday, after the Italian government imposed the most severe restrictions since the end of the main lockdown in June. Hundreds gathered outside the offices of the regional government in Milan, with some throwing stones, petrol bombs and fireworks. In Turin, shop windows were smashed and stock looted.

The country's prosecutor for terrorism and organized crime, Federico Cafiero de Raho, said subversives — including those from the extreme right and anarchists on the extreme left — had infiltrated peaceful protests nationwide.

Under the latest rules, all bars and restaurants must close by 6 p.m. local time. Cinemas, theaters, gyms, pools and concert halls will also have to shut. Prime Minister Giuseppe Conte said the pandemic had reached "worrying levels" and that tough measures were needed to "manage it without being overwhelmed."

Spain has already introduced new state of emergency restrictions on the opening hours of hospitality businesses, with France expected to follow suit. President Emmanuel Macron is to give a televised address on Wednesday evening.

In Germany, Chancellor Angela Merkel held an emergency meeting with state premiers on Wednesday. They agreed to implement a partial second lockdown to begin on Monday, November 2.

This "lockdown light" — a less intense version of measures that brought German society and economic activity to a standstill this spring — will allow schools and kindergartens to remain open but restaurants, bars and some shops will be forced to close for at least a month. Large events will be banned and unnecessary travel discouraged. Authorities are also calling on employers to transition into having employees work from home.

The Robert Koch Institute (RKI) for infectious diseases confirmed 14,964 new cases in Germany on Wednesday — a record since the pandemic began.

Germanywill also expand its current partial travel warning for Turkey to include the whole country from November 9, according to a statement by the Foreign Ministry in Berlin.

Switzerland tightened nationwide restrictions that will close clubs starting Thursday, stop in-person university attendance next week and limit other social activities. It is unclear how long the new measures will remain in place but they will introduce stricter mask rules both indoors and out as well as limiting the size of events of all kinds. The country says it will also begin distribution of COVID-19 rapid test kits. "COVID-19 cases are rising," said President Simonetta Sommaruga in Bern, "We don't have any time to lose. The damage to the economy would be greater if we were to do nothing now."

Russia has issued a nationwide mandate that people wear masks at public gatherings, on public transport and in elevators from Wednesday.

In contrast with the deepening gloom in Europe, there were celebrations in Australia as the country's second-biggest city Melbourne celebrated the end of several months under lockdown.

India has been holding major regional elections as the capital Delhi reported its worst daily caseload increase since the start of the coronavirus pandemic.

Many voters were seen wearing masks, with officials providing gloves as members of the public cast their ballots.

Authorities in Kashgar prefecture in the Xinjiang region of northwestern China say they have completed tests on more than 4.7 million residents. It follows the country's latest outbreak at the weekend.

Read more: China — An unpopular winner in the year of the coronavirus

More than 200 confirmed or suspected cases were found in Kashgar's Shufu county, where the outbreak occurred.

In the United States, outbreaks are worsening in hotly contested "battleground" states in next week's election, such as Pennsylvania and Wisconsin.

Pennsylvania's department of health on Tuesday said it had seen fresh record in new daily COVID-19 cases. Meanwhile, Wisconsin broke its daily state records for both cases and deaths.

The United Nations has canceled all in-person meetings at its New York headquarters after one member nation there reported five cases among its staff.

General Assembly President Volkan Bozkir announced the cancellation, on the advice of the UN Medical Unit, in a letter to the organization's 193 member nations.